HERE I was, wallowing in the toasty sunshine of the Old Town, marveling at the cleanliness of the street, the excellent quality of the espresso and the friendly permission I'd received when asking whether I could sit down. It had been five years since I'd been in Bratislava, and I hardly recognized the place or the cordiality with which I was being greeted. 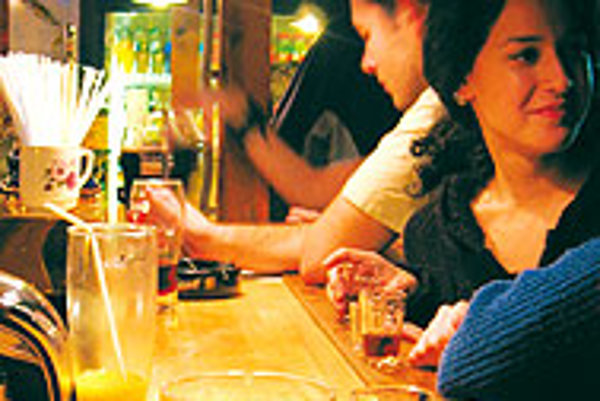 Font size:A-|A+0
HERE I was, wallowing in the toasty sunshine of the Old Town, marveling at the cleanliness of the street, the excellent quality of the espresso and the friendly permission I'd received when asking whether I could sit down. It had been five years since I'd been in Bratislava, and I hardly recognized the place or the cordiality with which I was being greeted. I hoped the initial dose of great customer service was not to be an isolated one.

I first arrived in Bratislava in February of 2002, and spent most of my initial days as a foreign exchange student here slipping on the icy footpaths, trying to discern the difference between one Nové Mesto building and another so I could find my way to school. As I'd grown up on the expansive beaches of western Australia, it is reasonable to say that the culture shock I experienced upon arriving can be likened to the shock one experiences after being doused in water and hit with a korbáč (a memorable experience that materialised during my first Slovak Easter). English was hardly ever heard on the streets in the Old Town, and customer service was nonexistent.

For example, I wondered why, at the post office, there was only a small gap through which transactions took place, so that I couldn't see the face of the person I was dealing with. Likewise, at cafés and restaurants, my friends and I were served begrudgingly and treated as little more than a fleeting annoyance. And everyone who shopped at DM on Obchodná Street in those days undoubtedly experienced the irony of Ráda Vám poradím (happy to serve you) imprinted on the cheerful name badges pinned below frosty, sullen faces.

Croatian writer Slavenka Drakulić points to the erosion of social capital under socialism as a main cause of the lack of adequate customer service in Central and Eastern Europe. Drakulić explains that "here, a smile is a sign not of courtesy, but of the inferiority of the smiler" and that "Not so long ago a smile could provoke distrust. Why is that person smiling? A show of happiness was a reason to suspect a person."

In the interests of full disclosure, I will admit that I have worked in customer service for the last five years. I understand that good customer service does not merely represent the chance for an extra sale or the opportunity to boost a company's reputation. It is a basic human transaction, forming part of a larger web of society in which citizens are trusting of and interested in one another. As an exchange student, I found the lack of personal interaction in day-to-day dealings difficult to cope with, and ordinary transactions such as shopping for food or ordering coffee in a café became unpleasant for me.

Happily, I can report that things have changed. Over the five years of my absence, the Old Town has been renovated, with signs now pointing out tourist attractions in both English and Slovak. These days, staff at pubs and restaurants know how to cater to both foreign and Slovak guests, and provide a level of hospitality that makes for a pleasant night or day out (as long as there's not a stag party at the next table!) All over the city, staff take an interest in their customers and show much more care and concern.

There is, however, still room for improvement. Only last week, a haughty sales assistant yelled at me when I failed to re-hang clothes after trying them on. When I feigned ignorance of Slovak, the yelling only got louder, attracting the attention of other customers. Embarrassed and angry, I left quickly and won't return. Our cleaning lady laughed when I told her my story, citing how her husband waited for three hours at the bank last week only to be interrupted by closing time halfway through his transaction. He had to return the next day.

With my exchange year as a basis for comparison, the improvements in customer service have been a welcome surprise on my second trip to Slovakia. Even so, I understand the frustration of tourists and residents who complain that service is still not what it should be. The only way to change this is for customers to vote with their feet by shopping, banking and eating at places where their patronage is valued. Maybe on my next trip I'll be able to go shopping for clothes in peace!