THE MOST recent opinion poll suggests that former labour minister Iveta Radičová is the most popular opposition politician.
She trails only Prime Minister Robert Fico and President Ivan Gašparovič, who have been dominating the popularity polls for a much longer time. 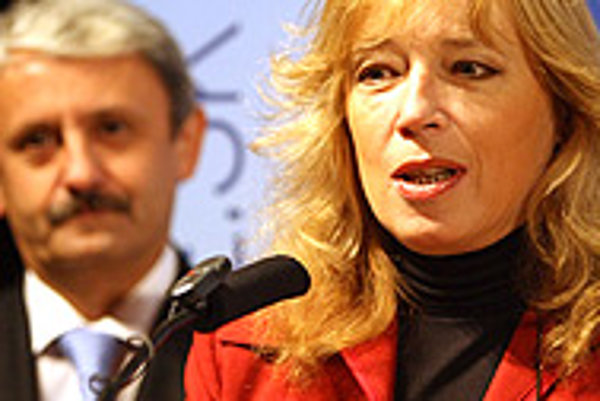 Font size:A-|A+
THE MOST recent opinion poll suggests that former labour minister Iveta Radičová is the most popular opposition politician.

She trails only Prime Minister Robert Fico and President Ivan Gašparovič, who have been dominating the popularity polls for a much longer time.

Radičová, the deputy chair of the Slovak Democratic and Christian Union (SDKÚ), is trusted by 15.2 percent of those polled by the MVK polling agency. Only Fico, with 41.8 percent, and Gašparovič, with 28.6, percent are more trusted.

Radičová scored this high even though the combined popularity of the opposition parties has not reached the numbers of the leading ruling coalition party Smer, which has not seen its scores drop since the last parliamentary elections.

Smer would get 42.8 percent of the vote if the elections were held today, followed by the ruling Slovak National Party (SNS) with 12.9 percent and the Movement for a Democratic Slovakia (HZDS) with 10.7 percent, according to a poll by the Slovak Statistics Office's Public Opinion Research Institute released on August 19.

The opposition SDKÚ and Hungarian Coalition Party (SMK) would each get 10 percent and the Christian Democratic Movement (KDH) would end up with 8.8 percent, the poll said.

"The opposition has not been able to mount a qualified challenge to the actions of Robert Fico," Juraj Marušiak, an analyst with the Slovak Academy of Science, told The Slovak Spectator. "Citizens might get the impression that [the opposition] only defends the particular interests of some groups that benefited from the actions of the previous government, and it is not keeping Slovakia's real interests in mind."

"However, the problem of the opposition is not its chosen tactics, but rather the success of the current ruling coalition, thanks to the favourable coincidence of internal and external factors," he said.

Citizens were also tired of the reforms carried out by the previous government, which is still taking a toll on the popularity of the opposition, he added.

The party most likely to improve their fortunes is the SDKÚ, Marušiak said. The increasingly radical tendencies of the SMK have had an impact on that party's trustworthiness. The party has not been able to handle internal tensions and reconcile with the political line Miklós Duray is pushing for, he said.

Similar infighting has plagued the KDH, he said.

"The internal conflict within the KDH, the essence of which was hardly understandable to the public, has had a negative impact on the trustworthiness of the party," Marušiak added.

The SDKÚ itself sees Radičová's popularity as a result of the former labour minister not being directly involved in the reforms carried out by the government of Mikuláš Dzurinda.

"The results of Mrs. Radičová prove that she is an expert in her area and that we are not a one-man party," the deputy chairman of the SDKÚ, Milan Hort, told the Hospodarské Noviny economic daily.

Radičová shares Hort's opinion. People have understood that as a minister, she made professional rather than political decisions, Radičová told The Slovak Spectator.

"For me it is a signal that these solutions were not the solutions of an opposition or coalition politician, but rather for the people," she said. "Though I was a minister for only 10 months, I submitted a number of laws. The last revision to the social insurance act has obviously resonated the most."

Sociologist Ivan Haulík, however, has a different take on Radičová's popularity.

"It's as though opposition voters have started to reconcile themselves with the fact that the SDKÚ can hardly post better election results without changing the party's leader," Haulík told Hospodarské Noviny on July 28.

However, the party has not yet seriously considered any reshuffling of the top SDKÚ post.

"We are not considering issues of this sort," Hort said, commenting on Radičová's potential leadership in the party.

Moreover, Radičová herself has rejected the idea of becoming the new boss of the SDKÚ.

"The top officials have just recently confirmed Mikuláš Dzurinda in the top post of the party, and there is no reason whatsoever to change this decision," she added.

But Dzurinda leads the chart of the least trusted politicians - 36.8 percent of those polled do not trust him, according to MVK. He is followed by HZDS boss Vladimír Mečiar with 36.4 percent, SNS head Ján Slota with 31.4 percent, and Fico with 18.4 percent, the poll says.

Marušiak said the results of the poll should not be taken too seriously. Dzurinda has been among the least popular politicians in Slovakia for a longer time, he said.

"On the other hand, he still has a large number of sympathisers," Marušiak said. "Just like Mečiar in the past and Fico at present, Dzurinda has not been a man of consensus, but rather a politician who creates conflicts and contributes to the polarisation of society. However, that is a characteristic of every political leader."

"It is he who is able to oppose Prime Minister Fico or convey certain key messages," Meseznikov told The Slovak Spectator.

The MVK polling agency has also published the first poll on the nations' preferences for the 2009 presidential elections.

If the elections were held today, current president Gašparovič would gain 44.3 percent of the vote. He would be followed by Radičová with 21 percent and EU Commissioner Jan Figel, a nominee of the KDH, with 12.4 percent.

Analysts consider Gašparovič and Radičová the most serious candidates for the presidential post. Gašparovič has been seriously considering running again.

"If Mr. President feels the support of the citizens and political parties, he sees no reason for not running," presidential spokesman Marek Trubac told the Markiza TV channel.

Radičová has not rejected a run at the presidency, however she has not made her final decision yet.

"I do not feel up to it," she told The Slovak Spectator. "I have been in top politics only for a very short time."

"As a new face, she could appeal to part of the disappointed urban and liberal electorate who supported the current opposition parties in the past," he said.