Journalists have recently been speculating about whether Iveta Radičová - the opposition politician, vice-chair of the Slovak Democratic and Christian Union (SDKÚ) party, and former labour, social affairs and family minister - has a realistic chance of becoming the next Slovak president. That's in response to her rising popularity in the polls. 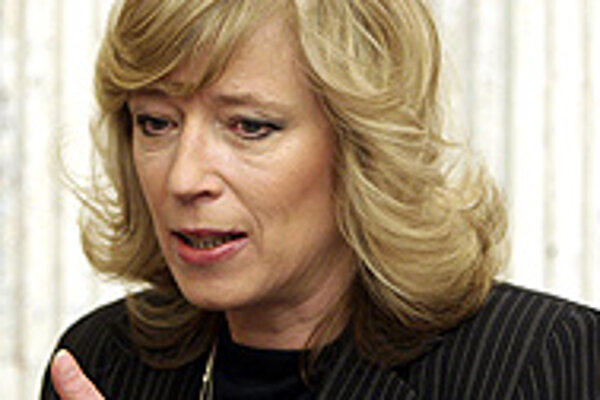 Font size:A-|A+
Journalists have recently been speculating about whether Iveta Radičová - the opposition politician, vice-chair of the Slovak Democratic and Christian Union (SDKÚ) party, and former labour, social affairs and family minister - has a realistic chance of becoming the next Slovak president. That's in response to her rising popularity in the polls. In an interview with The Slovak Spectator, Radičová credits the public's trust in her to making non-partisan decisions as labour minister, and being far enough removed from the Mikuláš Dzurinda government when it brought in its controversial reforms.

Radičová also spoke about the mistakes the Dzurinda government made, her relationship with the media, and the allegations lodged against her by the current labour minister.

The Slovak Spectator (TSS): Why do you think your popularity has suddenly risen?

Iveta Radičová (IR):The social ministry touches the lives of innumerable citizens, so it can also influence opinions of the person who is heading it very positively or negatively. I tried hard to be empathetic. But maybe my blows of fate have also taught me to be more perceptive and sensitive.

But mostly, the decisions I made resulted primarily from professional knowledge. I do not remember making any political decisions.

TSS: You're saying that none of your decisions was motivated by utilitarian party interests?

IR: I did not make any such decision. Not a single one. I did not even witness anything like that. And I have never promised anything that could not be accomplished.

TSS: So was your rising popularity caused by this? It is really amazing, as the opposition politicians are now relatively deadlocked.

IR: I will come back to the comparison between me and Mikuláš Dzurinda. I really was not a part of top-level politics when the unpopular measures were brought in, which Dzurinda's government was forced to do. Those first steps after the launch of the reforms were really harsh for citizens. Very harsh. Not every government has the courage to make such steps. But I'm not saying that Dzurinda's cabinet did not make any mistakes in these steps. It did.

TSS: For example, what?

IR: Several erroneous steps were made during the health reform - in communicating the reform, through the timing of the reform steps, to lacking a conclusion. This means that it did not start to show really positive effects for patients. In contrast, the tax reform has been showing definite results since 2003. That was a well-timed reform, and well-mastered.

TSS: And what about your ministry?

IR: I did not conceal my critical standpoint. After all, I stopped working for then-social affairs minister (Ludovit Kaník) as an external advisor because I disapproved of some of his actions.

Let's look at the social system reform. Unemployment really started decreasing noticeably, and visible results could already be seen during our last year in power. Unemployment fell by half. In 2003 we had an unemployment rate of more than 20 percent in 30 districts - now it is only that high in seven, and it keeps falling. The trend was set, and it opened the country to foreign investors. Today the opposite extreme is happening - the hunt for qualified labour. But the launch of the reforms was harsh, bad.

Mistakes were also made in solving the issue of social benefits. It was not necessary to cut benefits so sharply. That was really a mistake.

TSS: Do you think there were other mistakes made?

IR: Yes. Some mistakes were made in the first pillar of pension reform. It really has to be corrected. But the results of these reforms are undeniable. Slovakia has become a member state of the European Union. And I do not need any other argument.

We had to open the country, make it attractive for foreign investments. These were difficult tasks that were managed in record time, mainly thanks to people's patience. I do not know whether Dzurinda's cabinet thanked them sufficiently.

TSS: Do you consider that another mistake?

IR: Yes, I consider that another mistake. This probably explains the difference in voters' preferences in polls. However, I was not a member of the government when the reforms were implemented, unlike Mikuláš Dzurinda.

TSS: Why is the opposition stuck at a standstill? Does it lack an issue, or is there an internal division? Why is it so silent?

IR: I do not agree that the opposition does not have an issue. We react to the actions of the ruling coalition. That is the mission of the opposition. Thanks to our actions, for example, we succeeded in getting many of our comments into the final wording of the Labour Code, including the changes in parliament.

TSS: But the opposition usually draws attention to the issues in which the coalition politicians are allegedly involved, and our current opposition leaves everything to the journalists, especially when it comes to these controversies.

IR: Tomanová wrote in her CV that she worked as the minister's advisor between 1988 and 2003, so we recently asked her which minister she meant. I do not remember her being an advisor to Minister Kaník along with me. However, the media did not notice this issue.

TSS: So you think she did not work as an advisor?

IR: I do not know. I'm simply asking. Was she an advisor during the totalitarian regime, and also for Minister Kaník? I repeat, I do not know about that. But on the other hand, I know that the current general manager of the social security provider Sociálna Poisťovňa, Ivan Bernátek, was Kaník's advisor for the pension reform.

TSS: And what were the other issues that you alerted the media to, which they did not react to?

IR: The sacking of about 30 employees, directors of the European Social Fund (ESF). Today, I hear that there is a lack of labour (in the ESF), but we warned them that if they lost the directors who were supposed to secure continuity in such a complex issue, there would be a problem with financing. That has happened. Many NGOs have not seen payments for eight months. We warned about that, too.

TSS: So do you think the relationship between the opposition and the media is bad?

IR:No, I do not want to suggest that at all. The media behave in a normal way. I do not have the least reason to complain. I'm just denying the notion that we do not point out these issues.

TSS: That would be very interesting, because Prime Minister Fico thinks that the media in Slovakia are antagonistic.

IR: They surely are not. My reaction was a mere defense.

TSS: (Social Affairs) Minister (Viera) Tomanová said in her defense, in connection with the subsidy granted by her to the Privilégium organisation where she used to work, that the S.P.A.C.E. organisation, which you led, also got a subsidy during Dzurinda's reign.

IR: S.P.A.C.E. is suing Tomanová, as the information she gave was untrue, or half-true. Firstly, by April 1, 2004, I stopped being the external advisor to Minister Kaník. I stress, I advised him for free. Secondly, in the case of S.P.A.C.E., it was not a subsidy but money from the ESF. The appeal to hand in the projects was published by August 2004. The project was submitted in October 2004, when I was no longer the advisor. It was approved by the ESF in March 2005, and Minister Kaník signed the contract in September 2005. After June 2005, I was no longer the statutory representative of S.P.A.C.E., as I became the head of the Sociological Institute of the Slovak Academy of Sciences. I had no idea that one day, I would be a minister.

IR: Well, to this day it is Sk109,000. Because the minister spoke about the project in the way she did, S.P.A.C.E. decided to withdraw from the project and return the money. There was serious damage to the reputation of the institution, which participates in projects from Brussels. Thus, it is going to court.

TSS: And what is the situation with the payments of S.P.A.C.E. towards the social security provider Sociálna Poisťovňa?