SLOVAKIA'S capital could face a major transportation collapse unless a solution to Bratislava's transportation woes is found soon, local authorities warn.
With hundreds of thousands of cars clogging city roads during rush hour every day, the authorities are looking for ways to make the city's public transportation more attractive, and to improve the state of the roads in the capital and its surroundings. 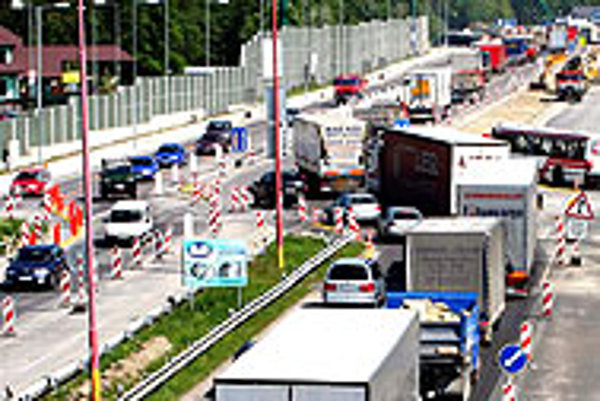 With hundreds of thousands of cars clogging city roads during rush hour every day, the authorities are looking for ways to make the city's public transportation more attractive, and to improve the state of the roads in the capital and its surroundings.

There are an estimated 200,000 cars in Bratislava - one for every two people living in the capital, said Milan Vajda, a spokesman for the City of Bratislava.

The vice-chairman of the Bratislava Self-Governing Region (BSK), Gabriel Agárdy, and Milan Cílek, deputy mayor of Bratislava, met on July 24 to discuss the alarming situation on the roads.

The most anticipated projects designed to solve the problems are the D4 highway bypass of Bratislava and the railroad tunnel under the Danube.

Transportation infrastructure makes up two-thirds of the city development budget, Vajda told The Slovak Spectator. The city invested Sk5 billion (€149 million) into the transportation system between 2003 and 2006, particularly into the Apollo Bridge, construction or enlarge-ment of several key thoroughfares (the embankment, Račianska, Galvaniho and Mierová streets), reconstruction of the tramline, and building the trolleybus track to Dlhé Diely, he added.

However, the Bratislava municipal office needs the help of the state and the regional government if it wants to improve its transportation infrastructure.

"The situation at the entrance to the capital (the Bratislava-Trnava motorway) is much worse than within the city itself," Vajda said.

The construction ministry also expects the motorway between Bratislava and Trnava will be unable to meet the area's transportation needs by 2010, so the D1 will need to be widened to six lanes, the daily reported. The ministry plans to launch a technical study into the expansion of the highway by the end of August. The project could cost up to Sk8 billion (€239.7 million).

There is also the complication that the construction has to take place while the highway is still in use. For that reason, the construction could last as long as about four years, ministry spokesman Marián Jánošík told Sme.

The Harbour Bridge (Prístavný Most), at the highway entrance to Bratislava from Trnava, is the busiest section of road in Slovakia. According to Sme, more than 120,000 cars pass through this bridge daily.

"The planned D4 highway would connect the D2 and D1 highways, and that way divert the traffic," Jánošík said.

The D4, also called the zero ring, is a 50-kilometre-long highway bypass of Bratislava that is to include a tunnel under the Small Carpathians. The construction is expected start in 2008 and the costs will reach around Sk35-38 billion (€1.04-1.13 billion).

The D4 has been part of Bratislava's master plan since 1993, but the regional government has raised concerns about it and is suggesting an alternative.

Originally there were seven drafts of the bypass, said Katarína Krapková from the press office of the Bratislava Self-Governing Region (BSK). The option that was added to the city's master plan has a route that practically copies the cadastral area of the capital, in order to "manage the paperwork as easily as possible", Krapková told The Slovak Spectator.

That option remained in the new master plan that was passed this year.

"For the BSK, this option is no longer sufficient, because it only helps with transportation in the area closest to the capital and it doesn't take into consideration the needs of the new industrial parks, automotive plants and so on," Krapková said.

That's why the BSK opted for the Rovinka-Senec-Pezinok (Lozorno) route as the most acceptable.

"The disadvantage of the route in the master plan is that there are sections that collide with the planned third runway of the airport, the section near Ivanka pri Dunaji, which inflates the construction costs," Krapková said. The new option avoids some of these complications.

The city started preparing its current master plan in 1998, but it is a living document that can be updated according to the needs of the city and the region, Vajda said. There will be no big problems in agreeing on the precise layout of the bypass, he added

"What we - both the city and the regional government - will need is financing from the resources assigned for highway construction in Slovakia, because the city cannot manage this demanding construction from its own income resources," Vajda told The Slovak Spectator.

The regional authority and the municipality of Bratislava will both pressure the government to provide money for the bypass as soon as possible, he said.

Earlier this year, the regional government proposed integrating the D4 bypass into the Central European Transport Corridor (CETC), which would link regions from Scandinavia to the Adriatic. If the bypass becomes part of the CETC, the EU will co-finance it.

Bratislava could be considered part of the corridor, but the capacity of the highways around the city is not sufficient to handle such a significant international road.

One option is to co-finance the entire D4 highway from EU resources, which means it must be integrated into the national system of highways, Krapková said. This step has not been taken yet, though the National Highway Company has been planning it. That also has to be approved by the Slovak government.

Agreements on the highway projects around Bratislava have been made early enough, but it will still take years to complete them. Meanwhile, Vajda said the city is glad to have the new 1.44-kilometre Sitina Tunnel, which should speed up transit through Bratislava and greatly ease traffic in Patrónka, Karlova Ves and Devín.

"The tunnel has been fulfilling its purpose since the very beginning," Vajda said. "It solves the transport situation in the whole western part of Bratislava."

The Patrónka junction also affects Lamač, Kramáre, Karlova Ves, Dúbravka and Devínska Nová Ves. Traffic in this transportation junction is expected to decrease by half as a result of the tunnel, Vajda said. That means the municipality will be able to repair the roads in Mlynská Dolina, Patrónka and Lamačská Cesta, and to revise the traffic signal plans in Karlova Ves and Dúbravka, he said.

However, the City of Bratislava knows the high and growing number of cars registered in the city is a problem that cannot be overlooked. As such, the strengthening of roads seems to be just a temporary solution. According to Vajda, the city needs to make public transit more attractive for its residents.

"Mainly thanks to this, we can manage to keep transportation in the city working," he said.

The City of Bratislava is planning to modernise the city's fleet of public transit vehicles. There are also plans to build rail transportation to Petržalka and integrate it into the rail transportation system, including a tunnel under the Danube River, Vajda said.

The municipality will co-finance the project with the government and Slovak Railways. The City of Bratislava, the Transportation Ministry and the rail company signed an agreement about the project in March.

"It is an association of investments planned to integrate Bratislava into the international railway corridor and to integrate rail transportation in Bratislava," Vajda said.

It will help to synchronise the two biggest investments in Bratislava in terms of time and finances, Vajda said. The first is building a modern rail network and integrating it into the Number 17 speed corridor that links Paris, Strasbourg, Stuttgart, Vienna, and Bratislava. The second is city rail transport in the south of Petržalka.

Both projects are expected to be completed by 2013.

The Bratislava part of the rail corridor will carry trains 16 to 20 metres underground and will have four stops, thus serving as a means of city transport similar to the subway that the city rejected years ago as too expensive.

"The length of the underground tunnel in Bratislava will be six kilometres with four stops including two existing ones - Predmestie and Filiálka - and two new ones on Páričkova Street and Dostojevského Rad," Daniel Maruniak, director of development at Slovak Rail, told The Slovak Spectator earlier this year.