THERE'S more to the Bratislava Region than just Bratislava.
It's hard enough to explain that to foreign visitors, to encourage them to spend more time in the surrounding areas. But it's even harder to persuade Bratislava residents. 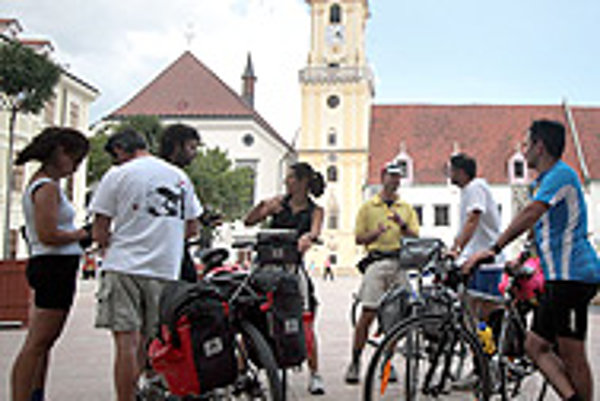 THERE'S more to the Bratislava Region than just Bratislava.

It's hard enough to explain that to foreign visitors, to encourage them to spend more time in the surrounding areas. But it's even harder to persuade Bratislava residents.

Suburban, or rural, tourism has so far just started to develop here, and the region wants to give it a kick-start, the Sme daily wrote.

"We know what we want to offer. And the tourism experts know who to offer it to," said the head of the self-governing region, Vladimír Bajan.

He says there are more attractions than just the popular Senec and the Small Carpathians Wine Route (Malokarpatská Vínna Cesta).

For example, only a few people know that Slovenský Grob is visited by as many as 70,000 people each year. The reason is roast goose meat.

"In Brussels, we got an award for the development of gastronomic tourism," said the mayor of Slovenský Grob, Ján Juran.

At first the geese were only roasted in garages or living rooms, but now there are 24 places that serve it. Recently, they have started opening not just on weekends, but every day.

With the flood of tourists, the municipality wants to improve its infrastructure and roads and build parking lots. It already has funds from the EU for that.

Nearby Marianka is the oldest pilgrimage destination in Slovakia, and one of the oldest in Europe. Beginning this year, the municipality got Sk3.3 million (€97,500) for tourism development. Construction has started on several guest houses, and money has been invested into promoting the village, which is also well-known abroad.

There are plans to turn Lake Rudava, near Malé Leváre, into a new tourist resort. A four-star campsite is under construction. Showers have been built on the beach, as well as paving, toilets, and fireplaces for barbecues.

Mayor Milan Pernecký says the water quality will improve - mud sludge is already being cleaned from the water.

On the other hand, Rovinka, formerly called Štefánikovce, is renowned for the clear water in its local gravel pits, which were made into lakes. A unique cultural-technical monument can be found here - the old levee, called Upper Rye Island Dike (Hornožitnoostrovná hrádza).

Last year, the Bratislava Region was visited by 840,000 people. Only 154,000 tourists, or 18 percent, stayed outside the capital city's borders.

From the total number of visitors to the region, more than 500,000 were Slovaks and nearly 330,000 were foreigners. Just 30 percent of the foreign visitors, and 11 percent of Slovaks, stayed outside of Bratislava.

The statistic does not keep track of "trippers" - one-day visitors, or tourists staying with friends and acquaintances.

The Bratislava Region is preparing a tourism development strategy for 2007 to 2013. The project will be the base for the further development of tourism in the region. One of the projects being discussed is a regional tourist association to promote the region.

The Bratislava Region office of the Statistics Office of Slovakia showed that 158,389 people stayed there in that period. Out of those, 84,112 people (53.1 percent) were foreigners. That number was down by 1.6 percent, the TASR newswire reported.

The average visitor spent 1.8 nights in the region.

The best-equipped districts are Bratislava II, with 27.5 percent of the accommodation capacity, and Bratislava I, with 22.9 percent. Pezinok has only 9.9 percent.

THE BRATISLAVA Self-governing Region (BSK) has a revamped website with a lot of new information.

"One can travel along and get to know the districts, towns and villages of our region with a simple mouse click," Katarína Krapková from the BSK said.

The website at www.bratislavskykraj.sk informs visitors about the region, local administration, transportation, culture, health care and more, according to TASR.

It includes details about the biggest events - The Days of the Bratislava Region and the European Week of Local Democracy, which take place in October. It also covers important long-term issues for residents and visitors, such as the planned introduction of the euro in Slovakia.

"We will answer all questions and help with problems that fall under the authority of the BSK," Krapková said.

The region is also launching a toll-free information line called Infolinka BSK (0800-111-003) in the coming days, in order to improve communication with citizens and visitors to the region. And the BSK plans to send regular news and information updates about events and stories in the region to people who subscribe on the website.

A new English-language version of the website that was launched in August offers a lot of information, especially about tourism, in a user-friendly layout.

A NEW plant for recycling and disposing of waste is on its way to Pezinok.

The plant will cover an area of 14,000 square metres. It will include a separation line that will mainly sort waste paper, cardboard, plastics and glass shards, the Hospodárske Noviny daily wrote.

The Petmas-Ekos company will spend Sk69 million (€2 million) on the project. It's expected to separate as much as five to seven tonnes of waste.

Construction is expected to start near the end of this year, and the company plans to employ about 60 people by next year.

Petmas-Ekos is an affiliate of the Danish group Marius Pedersen, which came to Slovakia in 1995. The company currently provides waste disposal services in more than 20 regions.

Together with other towns and villages, it operates 11 controlled waste dumps in Slovakia. It arranges separated waste facilities in Trenčín, Nitra and Banská Bystrica. It separates and disposes of waste plastics for Samsung Electronics in Galanta before they are further recycled.

CYCLISTS could soon be able to pedal comfortably from Rača to Pezinok.

The Bratislava district of Vajnory is planning to construct an arterial road for cyclists through the Small Carpathians, the SITA newswire reported.

Construction is expected to begin some time next year, and the road should be open to the public a year later, said Mário Schwab from the district of Vajnory.

The cycling route will lead from Rača through Vajnory and Svätý Jur as far as Pezinok. There will be two routes: one along the Rybničná Street, and the other along the Šúrsky channel.

The bike paths are designed to be flat and not too challenging, about 10 to 15 kilometres in length.

The path is expected to cost about Sk50 million (€1.5 million), which will be financed from EU funds. It will be part of the Bratislava cycling path network, so it will connect to the Danube dike and lead to Hungary and Austria.

Rudava Lake gets a clean-up

A BRATISLAVA company has won the tender to clear the lake at the Rudava holiday resort.

The project will remove the sediment on the lake bottom, make the lake deeper and change its shape.

Mayor Milan Pernecký said 65 percent of the project is financed from the state budget, 30 percent from European Union funds and five percent from the Malé Leváre municipal budget.

THE TRENČIN University of Alexander Dubček (TnUAD) is making plans for an affiliated political science facility in Malacky.

An agreement to establish the facility was reached by Malacky Mayor Jozef Ondrejka, Ján Garaj and Rastislav Tóth from the university's Institute of Natural Sciences and Liberal Arts, and the general manager of Inkubátor Malacky, Valentín Magdolen.

The parties involved are also interested in a second phase of the university programme in Malacky: launching a regular study in the field of political science.

New sewer system on its way

MOST of the Small Carpathians region is expected to be connected to a new sewer system by next spring.

The new system is expected to have a lower operational cost and be more environmentally-friendly.

The aim of the project is to concentrate and conduct the discharge water away from the region to the central sewage water treatment plant in the Bratislava district of Vrakuňa. The current technological state of the sewer network does not allow this.

A total of 30 kilometres of new sewers will serve the area, where about 50,000 people live. The new sewer system has the capacity for twice this number.

The construction is a part of an ongoing project for the region's suburban towns, including Pezinok, Modra, Svätý Jur and Bernolákovo, which finally will connect the sewer lines to the Bratislava network, and clean the discharge water in the central sewage water treatment plant in Vrakuňa. It will also be possible to connect the municipalities of Limbach and Vinosady to the new system.

THE NEW President of the Association of Cement Producers of Slovakia is Roland van Wijnen from Holcim Slovensko - a Rohožník company.

The post is rotated every 12 months between the four member companies of the association.

"During my presidency, the association will focus on reducing the effects of the cement industry on the environment," van Wijnen said. "We also want to promote the role of cement and concrete in the construction industry in Slovakia. More and more people can see the advantages of cement-concrete roads in Slovakia, thanks to the Sitina Tunnel in Bratislava."