'I would like to be a humane human being'

WRITER Heinz Jakob Tauber calls himself a Slovak Jew - even though he was born in Vienna, spent his childhood in the town of Holíč in the Slovak-Moravian border area, wrote his books in Czech, and has been living in Israel for nearly 40 years. 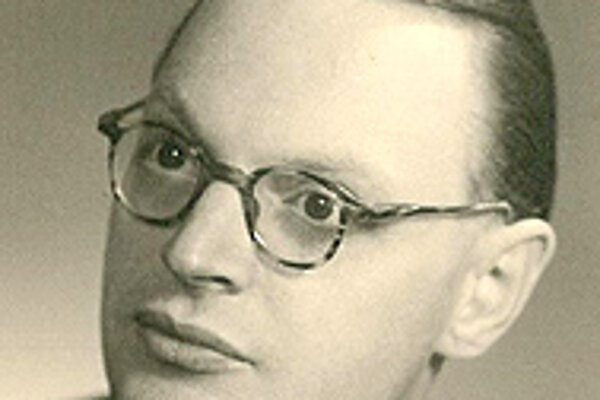 Font size:A-|A+
WRITER Heinz Jakob Tauber calls himself a Slovak Jew - even though he was born in Vienna, spent his childhood in the town of Holíč in the Slovak-Moravian border area, wrote his books in Czech, and has been living in Israel for nearly 40 years.

Tauber, who turned 90 last week, has written around 140 articles for the Jewish press that have been published in Slovak, Czech and German. He is also the author of two books that paint remarkable pictures of the life of Czechoslovak Jews and soldiers.

His fictionalised autobiography, Atlantída holíčských Židů (The Atlantis of the Jews of Holíč), depicts the life of a town between the two world wars, where the Slovak, Czech, Jewish and Hungarian cultures meet.

And Můj Přítel Monty (My Friend Monty) depicts the fate of a soldier in the Czechoslovak foreign army, fighting the heroic anti-Nazi fight in a non-heroic way.

Tauber came to the town of Holíč when he was two years old. He tells The Slovak Spectator that the idea to write Atlantis about his adopted hometown had long been incubating in his head.

"Holíč was always very dear to me. I thought that it would be right to depict something from the past," he says in a phone interview.

Atlantis introduces a whole gallery of great and small characters depicted with warm humour, who remotely resemble the characters from Anatevka from the musical Fiddler on the Roof. But in contrast to Anatevka's residents, Tauber's characters live their lives at the crossroads of four cultures, with the petty and less-petty joys and worries of small-town life.

Their life stories are often sad and funny at the same time; often picturesque, but always kind.

"Humane," Tauber corrects and repeats himself, "humane, as I do not wish anything else than to be a humane person. I wanted to be, and remain, a human being. And anyone who believes it is important to be a human being, is my friend."

Tauber lived in Holíč until 1935, when he started studying medicine in Bratislava.

"I experienced Holíč back at the good times," he continues. "Then it came - you know what I mean."

He is talking about the Holocaust, even though he does not say the word during the entire conversation.

As the title of his book implies, this bizarre picture of Jewish life in Holíč suddenly disappears - not because of a natural disaster, like the one that destroyed the mythical Atlantis, but rather the anti-Jewish frenzy of the Second World War.

In the chapter called Píseň o babičke (Song about Grandma), he describes a house where his grandmother used to live with her family.

"It was doomed to become the house where fascist executioners dragged Uncle Emil Nemluv out of, to the big execution place of the New Order," he writes.

The book also mentions another relative, Josef Chaim Sonnenfeld, who immigrated near the end of 19th century to Jerusalem, and in the early 20th century became the chief rabbi of Jerusalem.

"Josef Chaim Sonnenfeld was a very respected man in our family," Tauber says. "While we never agreed politically, we had very good family relations. We considered him a holy man.

"Our family spoke about Sonnenfeld like he was a saint, who had an excessive religious conviction but was an honourable man. He wanted to lead a life similar to the life of this non-Jewish family member - Jesus."

From 1938 until 1941, Tauber worked in the Bratislava Central Jewish Office in the editorial staff of the newspapers Haderech (Way) and the Jewish Bulletin.

In 1941, he left for what was then Palestine. A year later, he joined the Czechoslovak foreign unit, which was deployed in the Middle East as part of the British army.

Tauber describes what it was like to join the unit in My Friend Monty. Entering the building was like going to a place, "where a free man goes for lack of freedom. To the military mission of a country wiped off the map of Europe by arbitrariness and brutality, to the Czechoslovak military mission in exile."

Tauber took part in the battles in Egypt and Libya, then graduated from the Officers School in Haifa in 1943 and was deployed in Europe.

Until the Allied invasion, Tauber served in England, and after that in France.

But Tauber always thought it was a mistake for him to join the army. He recalled these experiences in Monty.

"I wrote Monty convinced that people who read it will know why I did it," he says. "I was never a Czech patriot, and I just showed the things I considered worth showing."

The book portrays Tauber's decision to join the army as a foolish step. He keeps caricaturing himself as a pacifist with a feeble build and handicapped sight (astigmatism).

His unique, non-heroic way of depicting the war is implied by the title itself: Monty is no heroic comrade in arms, but rather a small dog who appears for the first time in the second third of the book.

"We sat in the tent, my friend Beran, the dog, and me. We had a serious conversation," writes Tauber. "What name would be proper for a small dog with a pointed muzzle, pink tongue, and beautiful eyes, by which he adopted us?"

While Tauber never gave a reason for joining the army in his book, it's clear he wanted to defend himself against anti-Semitism.

"During the war, I already had experienced anti-Semitism," he says. "That is why I write critically about the war, but not angrily. I was not angry.

"I knew that there was no real reason for anti-Semitism - someone invented it, and they grew up in it."

In spite of his critical view of war, and his own role in it, Tauber was awarded the French Military Cross for saving the life of a French captain.

"He also fought against the people who destroyed the country in which he lived, who killed his family and friends," writes literary critic Miloš Doležal in the May 2006 edition of the cultural weekly A2.

He fought the people who were responsible for making the world of the Holíč Jews disappear like Atlantis.

After his service in the Second World War, Tauber moved to Prague in 1945. Then he worked as a local doctor in the Czech town of Benešov nad Ploučnicí.

In June 1968, even before the Soviet invasion of Czechoslovakia, Tauber left for Israel.

"I have always felt Jewish. I just returned home," he says, by way of explaining his move.

His daughters still have good memories from living in Czechoslovakia.

"My daughters remember the time spent in the Czech Republic as a wonderful time," he says. "They did not experience anything bad. They felt no anti-Semitism."

Tauber worked as the head of Medical Centre in Kirijat Jam near Haifa until his retirement in 1985.

But through it all he kept writing, mostly for the Jewish press. His articles have been published in Slovakia, in Czech Republic and in Israel, in Jewish periodicals like Rosh Kodesh and in the Jewish Almanac.

"My articles got lost, as the Czech literary character Švejk says, 'in the whirlwind of global revolution,'" he says.

Tauber confesses that he does not believe in God.

"Unfortunately, I cannot believe in the particular Lord in whom President Masaryk believed," he says. "But I do believe in some force that commands us to live and to be a human being, to help humans. That is in me."

Tauber has just passed his 90th birthday, but he refuses to celebrate it.

When I first speak to him on the telephone, I am not sure if my timing is right, as his voice is so tired.

"You can," he answers readily, "but I do not know whether I will still be alive by then."

In June 2004, when Tauber became an honorary citizen of Holíč, he was almost blind. So his daughter came instead to accept his honorary citizenship, and she read one of Tauber's articles to the citizens of Holíč.

In the article, Tauber described how he was returning home in autumn 1944, and how he hoped to find the old Holíč.

"My mother was killed in Auschwitz, my father lived in Carlsbad by that time. . . I imagined I could find Holíč, the unsightly town on the eastern bank of the River Moravia, approximately in the same state as it was when I left it in 1941.

"I did not find my mother, I did not find anything that could remind me of the happy years in this small town. I found several acquaintances who were still alive at that time, and I also found graves. Graves of people who were lucky enough to die a normal death, and I did not realise how lucky they were."

The author of this article contacted Heinz Jakob Tauber by chance. She has been searching for traces of her own possible relatives through the internet, as she only knew a few facts about the closest relatives of her father. The first was that they all died in concentration camps during the Holocaust. The second was that her grandfather, Emil Sonnenfeld, was born in the small village of Dobrá Voda near the town of Vrbové in western Slovakia - in the place where, in 1849, Josef Chaim Sonnenfeld was born. He later became the chief rabbi of Jerusalem.