Anna of Tyrol to be crowned in Bratislava - again

BRATISLAVA's illustrious history as the most important coronation city of the Austro-Hungarian Empire will be on display the weekend of September 1 and 2 as actors in costume fill the Old Town to re-enact the coronation of Anna of Tyrol, the wife of Matthias, King of Hungary and Bohemia. 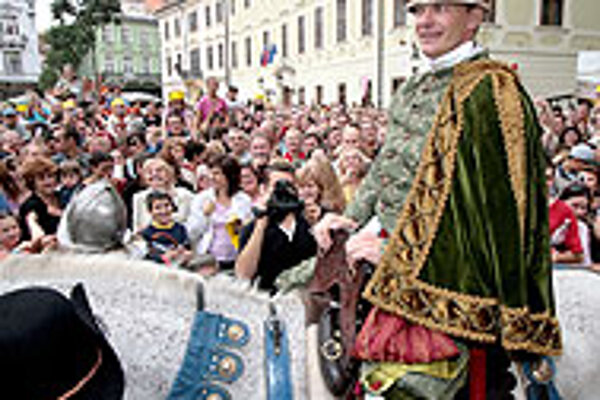 Font size:A-|A+
BRATISLAVA's illustrious history as the most important coronation city of the Austro-Hungarian Empire will be on display the weekend of September 1 and 2 as actors in costume fill the Old Town to re-enact the coronation of Anna of Tyrol, the wife of Matthias, King of Hungary and Bohemia.

It's all part of the popular Coronation Celebration, an event now in its fifth year that stages the coronations in the order they occurred during Bratislava's time as the coronation capital from 1563 to 1830.

This year the monarch is Anna of Tyrol, who was crowned in March 1613.

Up to now, the re-enactments have taken place in St. Martin's Cathedral, where the coronations originally occurred, but this year it will be held on the Main Square.

"The Archbishop's Office in Trnava wouldn't permit the coronation to be performed in the cathedral," said Miroslav Vetrík from the Korunovačná Bratislava civic association, the celebration's main coordinator.

When pressed for comment, the Bratislava-Trnava Archdiocese gave two reasons for its decision. First, a church that still holds masses is an inappropriate venue for the coronation ceremony, which it views as a theatrical performance.

"The cathedral is not a concert space, like the Klarisky church," Tibor Hajdu from the Archbishop's Office told the TASR newswire.

The second reason is that construction is underway in St. Martin's Cathedral to replace its historical organ.

Therefore, Vetrík and the director of the re-enactment, Pavol Smolík, are left with the challenges that come along with moving it outdoors. For example, the cathedral fit only 300 visitors, which turned it into a VIP event, but the Main Square has enough space to sit a thousand spectators. The organisers plan to hold the performance in front of the Old Town Hall and use its windows for part of it.

The programme begins in front of Bratislava Castle at 10:00 on September 1 with a parade to carry the coronation regalia to the Main Square. The parade, which in past years has proved to be one of the celebration's spectacular highlights, will consist of Anna of Tyrol, who will be performed by Slovak actress Zuzana Fialová, King Matthias, and knights.

The coronation ceremony will start at 10:30 and last an hour. It will be held in Latin and follow historical tradition. Afterwards, the royal parade will come together again for a procession from the Main Square via the Old Bridge to the opposite embankement of the Danube. There, on the Tyršovo Embankment in Petržalka, is where most of the celebrating will take place.

A historical re-enactment group has prepared a knight's tournament and visitors will find a variety of period entertainment, including a handicrafts market, wine, roasted ox tasting, carriage driving, and falconer shows. The events will be capped with a fireworks display.

Also as in the past, those interested can then attend a concert in St. Martin's Cathedral on September 1 at 20:00. The Solamente Naturali historical music ensemble will perform Missa Solemnis by Bratislava native Ján Nepomuk Hummel on period instruments. The Alea chorus led by Branislav Kostka will also perform, accompanied by soloists Andrea Čajová, Zuzana Danajčanová, Ondrej Šaling, and Rastislav Uhlár.

Otto von Habsburg, the head of the former royal Habsburg family, had promised to attend the celebration, but had to cancel, Vetrík told TASR.