Sculpture biennial is an emotional journey

THE BIENNIAL of Small-Scale Sculptures, which opened in July for a 10-week run at the Renaissance Burgher House in Pezinok, is the largest exhibit of its kind presented in Slovakia in the last 16 years. 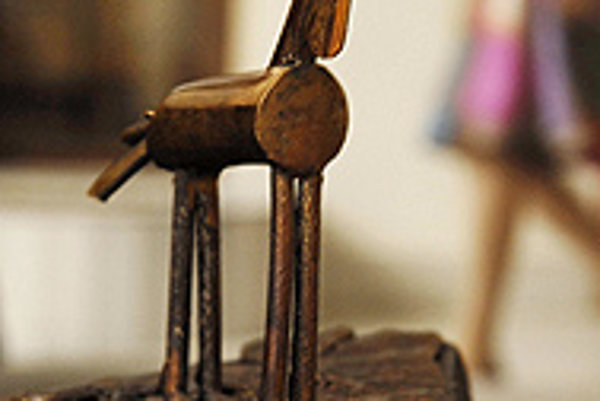 Font size:A-|A+0
THE BIENNIAL of Small-Scale Sculptures, which opened in July for a 10-week run at the Renaissance Burgher House in Pezinok, is the largest exhibit of its kind presented in Slovakia in the last 16 years.

It was organised by the Ateliér PK civic association, with the aim of re-familiarising the public with a style of art that has largely faded into the background since the Velvet Revolution.

"The town of Pezinok was chosen as a venue because of its role in exhibiting the works of 'unwanted' sculptors before the revolution," Ateliér PK stated in its press release. "During the Normalisation Period, it was a refuge for artists such as Jozef Jankovič, Andrej Rudavský, and Štefan Prokop, who were banned from exhibiting in the capital."

Under the curatorship of Ľuba Belohradská and the supervision of Prof. Jozef Jankovič, the leading figure on the Slovak sculpture scene, the biennial has brought together more than 75 sculptures from 42 Slovak artists who graduated from art academies after 1990.

All use classic techniques and delicate materials to create works that are both tasteful and elegant.

"This biennial is a 'new beginning' in the modern history of small-scale sculpture art in Slovakia," Belohradská said.

And according to Ateliér PK, the biennial is the first chance in years for the public to finally get a thorough overview at the terrain in this field, which makes it actually about people getting to know each other: the artists and visitors, the visitors and the sculptures, and the artists among themselves.

All of the sculptures are smaller than 90 centimetres. Some are made from wood, while others are from marble, copper, tin, or bronze. The themes are various and timeless: nature, the body, philosophy, love, and beauty.

The sculptures are designed to be used as decoration, to brighten up a living space, or simply to please the human eye.

The Biennial of Small-Scale Sculptures is unique not only for its size and the variety of artists and works it includes, but for the fact that it exists at all after periods of censorship and silence.

What: The Biennial of Small Scale Sculptures
When: Until September 23; every day, except Monday, 12-20:00, Sundays 10-20:00
Where: Renaissance Burgher House, Štefánikova 2, Pezinok
For more information, contact Viera Moravčíková of Ateliér PK at 0907/700-601.