THOUGH the leadership of the Hungarian Coalition Party (SMK) denies any upheaval in their ranks, political observers have raised the possibility that disgruntled SMK supporters could start a new ethnic Hungarian party in Slovakia.
Hungarian intellectuals living in Slovakia say they can hardly identify with the direction the SMK has taken since Pál Csáky replaced Béla Bugár in the top post, Péter Hunčík, one of the co-founders of the Public Against Violence party, wrote in Új Szó, a Hungarian daily published in Slovakia. 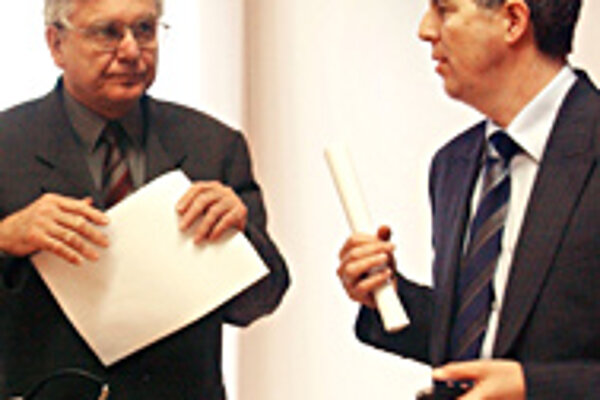 Font size:A-|A+
THOUGH the leadership of the Hungarian Coalition Party (SMK) denies any upheaval in their ranks, political observers have raised the possibility that disgruntled SMK supporters could start a new ethnic Hungarian party in Slovakia.

Hungarian intellectuals living in Slovakia say they can hardly identify with the direction the SMK has taken since Pál Csáky replaced Béla Bugár in the top post, Péter Hunčík, one of the co-founders of the Public Against Violence party, wrote in Új Szó, a Hungarian daily published in Slovakia.

Moreover, there are calls for establishing a new party for the Hungarian minority living in Slovakia, he added.

"Everything depends on whether there will be someone who has the courage to lift the flag of a new party," Hunčík wrote in Új Szó.

The tensions surfaced after Miklós Duray became the party's deputy chairman for strategy, due to fears that the party is getting more outwardly radical as a result, Bugár told The Slovak Spectator.

Duray is known for statements that carry a nationalist undertone. He has called for a discussion about autonomy for the Hungarian minority living in southern Slovakia.

However, the party board has not yet adopted any document that would confirm a move towards radicalism, Bugár said.

Under Duray's supervision, a document called "Principles of the SMK Strategic Programme" has been created. It has already evoked criticism from Hungarian intellectuals.

"Anyone who consciously believes in Christ and at the same time is against autonomy is only a servant licking the threshold of the church," reads the strategy, as quoted by the Sme daily on August 28.

"Slovaks were part of the history of the Hungarian Empire and they could consider themselves the offspring of Hungarian statehood," reads another quote.

The document also criticises the economic situation and the arrival of foreign investors in Slovakia, suggesting that the "SMK is considering the interests of the poor, the middle class, employees and small- and medium-sized businesses. The arrival of international firms has not bought any positive experiences for Slovakia."

SMK boss Csáky said he sees no reason to comment on the possibility of a new party.

"The chairman should comment on serious issues and not on gossip," Csáky told The Slovak Spectator.

"It is nonsense. These are only rumours from some possibly-dissatisfied people."

Political scientist László Öllős said here might be some tension within the SMK, but there is hardly any danger that the party will soon dissolve.

"The current tension would have to build further for that to happen," Öllős told The Slovak Spectator.

He confirmed that he has heard about the prospect of establishing a new party, and said that there are a couple of intellectuals who openly identify with the concept.

"However, they don't hold any high posts in the party," he said.

He added that such a party would only have success if Bugár took the top post, which he also considers highly improbable.

Bugár himself denied the speculations and said he is not leaving the party.

"Certainly, there are different speculations and hints, but I do not care about those," Bugár told The Slovak Spectator. "I am not part of that. There is only one Hungarian Coalition Party."

There are issues that could have been solved differently within the SMK, Bugár said. But he does not think establishing a new party is the solution.

"Discussions about founding a new party are dangerous," Bugár said. "You establish it and then what? Where is the guarantee that the parties won't come to an agreement before the elections? What if neither party makes it into the parliament?"

"The old and the new party would fight and, with a relatively small difference, either one or the other party would make it into parliament," he said.

But the third scenario of neither party making it into parliament is more likely, he added.

"In the tough campaign the parties would need to wage in order to survive, there might be arguments that would discourage the Hungarian voter," he said.

The solution is to express disagreement within the party if there is any dissatisfaction, Bugár told The Slovak Spectator. But he admitted to knowing about the Duray document and hearing certain statements from the vice-chair that he characterised as "quite strange".

There are currently three factions within the SMK, Öllős said: the so-called Bugár wing, the Csáky wing and the Duray wing.

The group around Bugár currently makes up 40 percent of the party, while another 40 percent support Csáky and 20 percent are Duray's allies, he said. This situation makes it difficult for the chairman to balance his power, so he is acting very carefully.

"He sees that he cannot afford any sharp conflicts because it would mean a serious problem for the party," Öllős said.

If Csáky loses this fragile balance between the existing wings, the SMK might split, he added.

This also is one reason the SMK board played down the conflict between Bugár and Duray and decided that Duray must apologise to the former SMK chairman for his false statements about Bugár's alleged cooperation with the secret police, Öllős said.

Duray, in fact, has not been penalised for his statements at the meeting of the SMK board on August 27.

"What was I supposed to do?" Csáky told The Slovak Spectator. "Prepare an execution squad?"