VAT cut on books not a novel idea, publishers say

THE ROBERT Fico government is preparing to drop the value-added tax on books from 19 percent to 10 percent: a move that has been greeted with ambivalence by publishers, and with scorn by opponents of the government's tax policies.
"The plan has not been definitely confirmed yet, but it is very probable that the Finance Ministry and the Culture Ministry will agree on reducing the VAT on books from 19 to 10 percent. 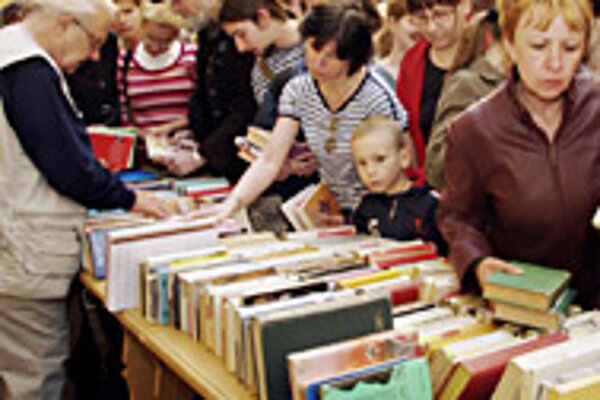 Font size:A-|A+0
THE ROBERT Fico government is preparing to drop the value-added tax on books from 19 percent to 10 percent: a move that has been greeted with ambivalence by publishers, and with scorn by opponents of the government's tax policies.

"The plan has not been definitely confirmed yet, but it is very probable that the Finance Ministry and the Culture Ministry will agree on reducing the VAT on books from 19 to 10 percent," Finance Ministry spokesman Miroslav Šmál told The Slovak Spectator.

The Finance Ministry estimates the state might lose Sk137 million (€4 million) in 2008 as a result of VAT reductions, so the plans need to be calculated into next year's state budget, Šmál said.

The government has already cut the VAT on medicine.

But when inflation is factored in, the price of books wouldn't drop more than five percent after a VAT cut, Mária Lešková of the Ikar publishing house told The Slovak Spectator. That's a negligible sum considering book prices on the Slovak market, she added.

"Based on our estimates, the planned changes to the VAT on books will have no considerable impact on the prices of books," Lešková said.

The Culture Ministry has never really said that a lower VAT will automatically result in a flat reduction of book prices, according to Culture Ministry spokesman Jozef Bednár. The primary goal is to bring more quality to Slovakia's book market, the ministry said.

"A small publisher, who under current conditions puts out five books a year, will be able to publish six or seven books or invest in better content or higher quality," Culture Minister Marek Maďarič told the public service Slovak Radio.

The VAT drop might result in a Sk50 million (€1.5 million) increase in the turnover of the book market, according to detailed estimates from the ministry.

But critics say the VAT reduction is a political decision that dismantles the flat tax without promising any considerable benefits for the book market.

"It is more of a cosmetic change, which further erodes the flat tax system," Ján Marušinec of the economic think-tank M.E.S.A. 10 told the Markíza private television station.

While book prices aren't expected to fall dramatically, some in the publishing industry see the proposed VAT cut as a piece of bread after years when the book market only got crumbs. The Association of Book Publishers welcomed the move.

He doubts that VAT reduction would considerably affect the price of books.

"But in comparison with book prices in other European countries, the prices of books in Slovakia are actually relatively low," he told The Slovak Spectator.

Boris Gregor, director of the Belimex retail book store, said that on first glance, the VAT reduction would ease publishers' already-strained budgets. But the measure would also bring some complications, he said.

"A serious problem will emerge involving imported Czech books, because the retail price of the book depends on the exchange rate and the difference in VAT," Gregor told The Slovak Spectator. "While Slovak readers accept Czech books, we will most likely witness uncontrolled importing of books from the Czech Republic to the market, which is already saturated with Czech books."

While Gregor agreed that VAT is a significant factor on the book market, he also said it would take a relatively long time to be reflected in the final price of books.

But Martin Chovanec, director of the Slovenský Spisovateľ publishing house, considers the VAT reduction "the first positive news for the book industry in Slovakia since 1989".

"In terms of importance, I would rank it right after freedom of expression," Chovanec told The Slovak Spectator. "No Slovak government has decided to take this step before."

Lowering the VAT would rank Slovakia among the countries that respect books, such as Great Britain, Ireland and Spain (which have no VAT on books), and also the Czech Republic, Poland and recently Sweden, Chovanec added.

Some publishers still expect more support for non-commercial and low-circulation literature, both Slovak and international.

Ryba Edition produces books with the demanding polygraph printing method, often focusing on fine art and poetry. Publishing an artistic monograph is more difficult on the small Slovak market than it is somewhere else, Ryba said.

While the German publishing house Taschen publishes several tens of thousands of copies of a book, Ryba Edition only produces 700 to 1,000 copies of a similar book in Slovakia.

The printing costs and the price of paper in Slovakia are comparable to other European countries, he added.

"Certainly, more attention from the public media would help, along with some progress in book fairs in Slovakia," Ryba said.

Lešková of Ikar said government support for literature would make a big difference.

"This year, as part of a programme to support publishing projects, the Culture Ministry has distributed much less funding than during previous years," Lešková said. "We would appreciate it if the state supported reading among schoolchildren more intensively by creating libraries."

Over the past five years there has been a drop in book sales in Slovakia, but the last two years have been promising, Gregor said. The only negative thing has been the shrinking number of retail outlets in smaller places, he added.

The Ikar publishing house, which publishes about 250 books a year, recorded its worst drop in book sales in 2003 after VAT increased from 10 percent to 14 percent. The decline continued even after 2004 when the flat tax was installed, which brought another VAT jump to 19 percent, Lešková said.

There was more stability on the market in 2005, which helped revive the market and slightly increased book sales across the board, she said.

"Currently, the situation on the book market has stabilised," Lešková said.

However, Chovanec said, talking about a book market is quite misleading.

"There is sometimes a DaVinci Code or a Harry Potter, but the vast majority of Slovak authors publish 100 copies," Chovanec told The Slovak Spectator. "I know of no publishers who have become millionaires or influential businessmen. They are mostly enthusiasts who will probably do nothing else.

"The beauty of the (VAT) move is also in the fact that it will improve life for all publishers - full-time publishers and other companies that occasionally publish books; children's books, religious books, text books and also women's books," Chovanec added.

Slovak households spend about two percent of their income on books.

The head of the Association of Book Publishers, Alex Aust, said about 4,500 books were published 10 years ago. Last year, there were 9,400 books offered.

However, he also said that book sales have been stagnating over the past couple of years, and the circulation of books has been dropping as well.

According to a survey by the Literary Information Centre, about 3.7 percent of those polled reach for books on a daily basis, the ČTK wrote.

With files from Jana Liptáková