SLOVAKS might soon have their complete medical history and records stored on a single electronic card.
The Slovak Health Ministry has already drafted the legislation to support the creation of an electronic medical record system that would store all the information about patients' health conditions and the procedures they undergo. Independent observers, however, fear that the ministry has not yet found a way to protect this sensitive personal data. 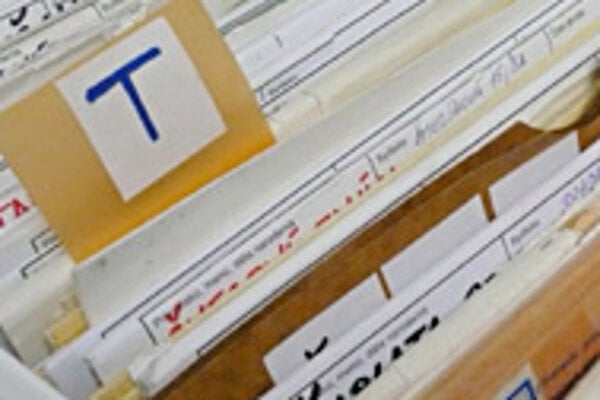 Font size:A-|A+  Comments disabled
SLOVAKS might soon have their complete medical history and records stored on a single electronic card.

The Slovak Health Ministry has already drafted the legislation to support the creation of an electronic medical record system that would store all the information about patients' health conditions and the procedures they undergo. Independent observers, however, fear that the ministry has not yet found a way to protect this sensitive personal data.

These registries would collect statistical data for analysing the health condition of the population, contributing to health policies, and improving disease prevention and health care in general, according to an official document from the Slovak Health Ministry.

The OECD and Eurostat would use the data for international statistical comparisons, the document adds. Installing such an electronic health documentation system would also let Slovakia meet its obligations towards the European Union, the ministry said.

The registry could prevent patients from having more examinations, tests or hospitalisations than necessary in the same year, the ministry says.

The registry would also increase patient safety, because doctors would be able to access continually-updated information about a patient's health and react more promptly if their condition worsens, he said.

The ministry hopes to acquire €100 million from EU funds to finance the project. It will be part of a larger undertaking called eHealth - using information technology to manage the health care system in Slovakia.

However, the Health Policy Institute think-tank argued that the database would concentrate a huge volume of sensitive personal data in the hands of a single state institution, which does not guarantee confidentiality.

"Such a concentration of personal data that is only superficially regulated by the law is potentially vulnerable to abuse," the Health Policy Institute said in a report. "Based on our findings, there is no system with such an extensive concentration of data functioning anywhere in Europe. The citizens, moreover, do not have the option of rejecting this obligatory monitoring (in the way they can, for example, reject an autopsy or donating their organs.)"

However, the Health Ministry rejected these concerns.

"Connecting personal details and health data that are saved independently on different technical media will only be possible with the approval of the health care recipient, just like it is with hard copy documents today," the Health Ministry said in a written statement.

The patient and their physician or health care worker will need an entry code to access the information, and every time the information is accessed or used, it will be recorded, the ministry said.

The National Register of Basic Medical Data is a legislative term that does not include a technical solution, the Health Ministry says. When the register is created, it will include all the norms and regulations that apply to the security of information systems and the protection of personal data, the ministry said.

The Health Policy Institute said the eHealth system requires a separate law that would treat the problem in its whole complexity before it can be responsibly installed.

The institute is also calling for a wide public discussion to solve the challenges of data security issues before the project is launched, the institute added.

The Association of Health Insurers agrees that the registry would open up security risks.

"It is necessary to have a clear plan and a standard procedure," the executive director of the association, Eduard Kováč, told The Slovak Spectator. "In the way it is proposed right now, the risks are far too great. The future medical data centre does not yet have the security aspects necessary for its daily functioning."

The main focus should be making the registry effective and useful, Kováč added. He referred to Israel as a country where a similar project has already been functioning for a long time.

"Data protection is definitely a key that requires substantial finances," Kováč said. "We are talking about Sk3 billion to Sk5 billion (€88.6 million to €147.8 million)."

More importantly, the health care system has bigger problems that need to be addressed before creating a database like this, he said.

"It is too early to install the system because it is like talking about a bowtie when you do not yet have trousers," he said.