Two more Saving Nests have opened to give women a safe, anonymous place to leave their unwanted newborn babies.
The 12th nest opened on July 12 at the Hospital and Health Clinic in Dolný Kubín. The 13th opened in Spišská Nová Ves at the beginning of August, the TASR newswire wrote. 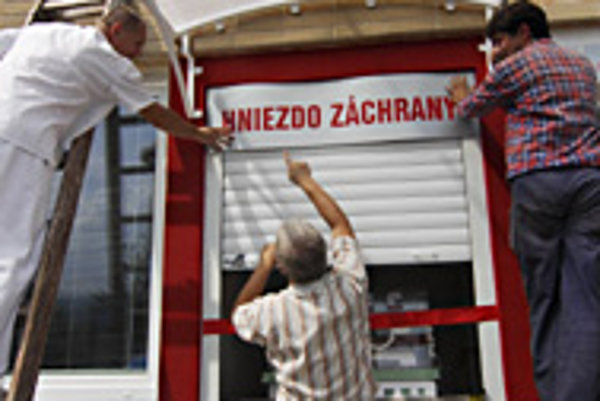 Two more Saving Nests have opened to give women a safe, anonymous place to leave their unwanted newborn babies.

The 12th nest opened on July 12 at the Hospital and Health Clinic in Dolný Kubín. The 13th opened in Spišská Nová Ves at the beginning of August, the TASR newswire wrote.

The Chance for the Unwanted non-governmental organisation runs the programme. The organisation's chairperson, Anna Ghannamová, said on July 19 that opening the Dolný Kubín Saving Nest filled a moral duty towards Orava - a region that the project had overlooked a little.

Less than five minutes after someone opens the roller blind of a Saving Nest to put a baby inside, it sets off a light signal somewhere else in the hospital, said the hospital director in Dolný Kubín, Miloslav Ostrihoň. Right away, nurses and doctors from the maternity department arrive to take care of the baby.

Slovakia is one of the few countries where public incubators for saving unwanted newborn babies exist, and where they are supported by legislation, Ghannamová said. Saving Nests are legal under an amendment to the Health Act. According to this law, women who put their children in a Saving Nest are not prosecuted.

The Saving Nests Project started in 2004, when the first three nests were opened. Ghannamová thinks it has been effective, as in the two-and-a-half years of its existence, the number of abandoned babies who die has decreased rapidly.

Before these nests started operating, there were 10 dead newborn babies discovered each year. But since the nests opened, there have only been three dead newborns, and 13 babies were found alive in the nests, Ghannamová said.

The Banská Bystrica Regional Government has sold two of its money-losing health clinics.

The sale of the clinics, in Poltár and Fiľakovo, was approved on August 23.

Their sale was recommended by the tender evaluation commission after a public commercial tender. According to the TASR newswire, both were won by SPC Bankruptcy Bratislava, which offered the most profitable conditions, including the long-term provision of health care services in the facilities.

"The health clinics have debts amounting to millions of crowns, and the executions of the debt repayments are still pending," said region President Milan Murgaš. "We shall pay the debts with the money gained by selling these facilities, and we will be a reliable partner for the contractors again."

SPC also offered the biggest amount, more than Sk25.2 million (€744,500), for the movable and immovable properties administered by the Poltár clinic, which experts say is worth about Sk14.6 million (€431,300).

The tender for selling the property administered by the clinics was announced by the region after the local governments turned down an offer to rent the clinics at conditions set by the region. Only two towns agreed to the offer - Tornaľa and Detva.

A modern X-ray machine donated by the Swiss government is up and running at the L. Pasteur Teaching Hospital (FNLP) in Košice.

The machine was officially put into service at a ceremony on August 20.

The hospitals in Humenné and Svidník also got X-ray devices as part of the project.

Each digital machine costs Sk2.5 million (€73,900). They are rarely used, and in the past, they were used to examine immigrants coming into Switzerland.

The FNLP will use the machine in their Clinic of Radio-diagnostics and Nuclear Medicine, in particular to diagnose chest and lung conditions, hospital spokesperson Jaroslava Oravcová told the SITA newswire.

The FCR device, made by the Fuji company, is one of the most modern devices used for X-ray diagnoses. It uses direct digital technology instead of film.

Shipping the devices, dismantling and re-assembling them, and training staff to use them cost about Sk5 million (€147,700).

The Swiss co-ordinator of the project was Leo Martin. He and his wife took part in the ceremonial delivery of the X-ray device to the FNLP.

Another guest was the chargé d'affaires of the Swiss Embassy, Claude Barbey, who officially cut the ribbon together with the financial vice-chairman of the FNLP, Miroslav Lenárth.

Koch Sanatorium on the move

Bratislava's Koch Sanatorium is moving to Petržalka, but will keep operating under the same name.

Mário Lužinský, the executive officer of the hospital, said the move was necessary because the 70-year-old building no longer complied with European standards, the SITA newswire reported on August 9. It was impossible to add more floors to the building or extend it in any other way.

"The conservationists did not allow us to change the design of the entrance door and windows," Lužinský told the Sme daily.

A European directive about hospital buildings is scheduled to come into effect in Slovakia in 2009, the TASR newswire wrote. It sets out precisely the dimensions of rooms and the operating room, among other standards.

The maternity hospital was built between the two world wars, and it does not comply with these standards. In the new building, not only will the surgery rooms and birthing room be bigger, but the patients' rooms will as well. The building will be twice the size of the original one, and it will have more extra features, Lužinský said.

But he could not say what would happen to the old building, because the sanatorium does not own the building.

The Koch Sanatorium has a long tradition of providing healthcare services. The building was designed by renowned architects Dušan Jurkovič, Otakar Klimeš and Jindřich Merganc.

The sanatorium also includes a garden created by gardener Jozef Mišák. The sanatorium and the garden together form a national cultural heritage site.

Health insurers have already helped pay for dozens of girls to receive a vaccine against HPV (human papilloma virus), which can lead to cervical cancer.

The vaccine appeared on the Slovak market last year. Since April 2007, health insurers have partially financed the vaccine for 12-year-old girls. Insurers cover five percent of the total amount, or about Sk750 of Sk15,000 (€443).

Each year, 550 new cases of cervical cancer appear in Slovakia. Every second day, one woman dies from this illness.

"The illness can be caused by the HPV virus, which can be transferred not only through sexual intercourse, but also by skin contact around the outer sexual organs," gynaecologist Michal Kliment said.

However, doctors say that most of the women interested in the vaccination are older, even though they have to pay the whole sum. Thus, about 700 vaccines are sold each month.

"The interest is growing, women are asking about the vaccination," gynaecologist Miroslav Zábovský from Považská Bytrica said. "This week alone, we prescribed the vaccines for three women. But most of them are women in their 30s, even in their 50s."

But many women expect the vaccines to become cheaper, or at least for the state to finance vaccines for 12-years-olds. One dose of the vaccine costs more than Sk5,000 (€148), and three doses are necessary.

However, the Health Ministry is not yet planning to finance the vaccines for girls. One reason is that so far, none of the EU member states is preparing to introduce obligatory vaccinations, or finance the vaccination from public health insurance, said ministry spokesperson Silvia Balázsiková.

Another reason is experts' differing opinions about the vaccine.

"Thus, we do not plan to change the current state of affairs yet," Balázsiková said.

Slovakia has an extremely low rate of same-day surgeries compared to Western Europe, something the Slovak Association for Same-day Surgery wants to change.

About seven percent of all surgeries in Slovakia are same-day surgeries, where patients are sent home to recover the same day they are operated on, association chair Eva Vidová told the TASR newswire. In Western Europe, the number varies between 40 and 65 percent, she said.

The association estimates that in a short time, Slovakia could increase its share of same-day surgeries to 30 or even 40 percent. This would save at least 20 percent of the treatment costs for these patients, Vidová said.

According to her, same-day surgery benefits all parties involved: health insurance providers save money; the state saves public resources; businesses get their employees back to work earlier to normal; and patients can resume their normal, working life sooner.

"Same-day surgery has not developed as much as we expected," Vidová said. "In the Slovak Association for Same-day Surgery, we have seen that in the last five years hospitalisation is still a 'national sport' in Slovakia.

"I see the reason mainly in the fact that health care providers do not have the motivation to change this, and also in the fact that the health insurers still do not seem to acknowledge that they should actively contribute to increasing the level of health care, and thus make the treatment of their policyholders more financially effective."

The average wage in the health sector in the Žilina Region is Sk17,000 (€502), according to statistics from the region's health department for the first quarter of this year, region spokesman Peter Kubica told the SITA newswire.

According to the statistics, four hospitals in the region - Čadca, Dolný Kubín, Liptovský Mikuláš and Trstená - achieved a surplus. In the health clinics, the total economic result was negative. The clinics in Námestovo and Turčianske Teplice were the only ones that didn't post a loss.

In the Žilina Region, the costs of healthcare employees' wages grew by more than Sk14 million (€413,800) in the first quarter.

Since April, the Žilina Region has been the administrator of four hospitals (in Liptovský Mikuláš, Trstená, Dolný Kubín and Čadca), two health clinics (in Námestovo and Turčianske Teplice), and five smaller health centres (in Turzovka, Kysucké Nové Mesto, Bytča, Martin and Liptovský Hrádok).

The construction of the Eastern-Slovakian Institute of Cardio-Vascular Diseases (VÚSCH) will cost about Sk1 billion (€29.6 million).

The foundation stone of the facility was officially installed in Košice on July 2. The new, modern institute will hold 170 beds for patients from all over eastern Slovakia and part of central Slovakia. The first patients are expected be treated there as early as 2009.

"Now we are looking for a bank, which would give us a floating credit of up to Sk400 million, by tender," Sabol added.

Currently, the VÚSCH is based in rented rooms. According to the SITA newswire, building a new, modern complex will give the institute the suitable, world-class conditions it needs to operate.