A day in the life of a shepherd

UP THE Jánska Valley in Liptov, shepherd Július Šuňavec walks behind a herd of 500 sheep. By his side, a small dog wags her tail.
On his command, the dog steers the sheep that wander away from the herd. Around him, the fresh Liptov meadows smell sweet and the high spruce woods rustle. It's enough to make someone say, 'Wow, how romantic!' 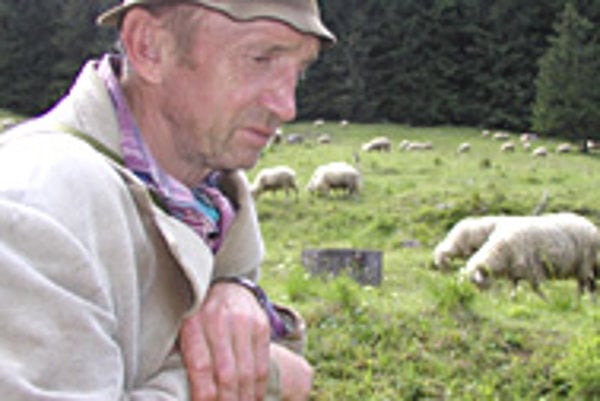 Font size:A-|A+0
UP THE Jánska Valley in Liptov, shepherd Július Šuňavec walks behind a herd of 500 sheep. By his side, a small dog wags her tail.

On his command, the dog steers the sheep that wander away from the herd. Around him, the fresh Liptov meadows smell sweet and the high spruce woods rustle. It's enough to make someone say, 'Wow, how romantic!'

Like the Canadian lumberjack or the American cowboy, it's easy to assume the life of a Slovak mountain shepherd is romantic. That's because we don't know the hard work that goes into it.

If you wanted to be the first to wish Šuňavec a good morning, you would have to be very early. In the summer, Šuňavec, from the Hybe agricultural cooperative, gets up at 03:30. In the spring, it's one hour earlier.

First he must go and milk the sheep - manually, of course, sitting on a low stool in the open air, or under a simple shelter. Milking sheep is done in very few places in the world. But that is why there are so few places where you can eat bryndza, or sheep's cheese.

And why do they get up earlier in spring?

"Sheep give their milk much worse then. So the morning milking lasts for two and a half hours," the weather-beaten Šuňavec explains.

Imagine sitting for a total of four or five hours a day in a very uncomfortable position and milking sheep, which are not always calm and patient, the milk just spurting in thin trickles...

Bryndza, korbáčiky (plaited string cheese), and boiled sheep whey are not made in the mountains any more.

"Today, everything has to be done much more hygienically, so the people from the valleys just come and collect the milk, and they make the products down there," Šuňavec says.

When does he go to bed?

"Maybe two hours before midnight," he answers briefly, before going back to watching his flock.

Then he adds that every second day is a little more leisurely. The shepherds take turns when pasturing, so everyone has free time every second day. That gives him time to sleep during the day.

However, he has to milk every day. And if he's not pasturing that day he has to help with the cooking.

In caravans by candle-light

No one brings a warm meal for the four shepherds and their chief shepherd.

"Beginning each week, the chief shepherd, as the boss, drives a car to the village to do the shopping, and then we play the cooks," Šuňavec says with a smile.

But the men do not have electric power here in the mountains.

"We cook on gas brought here in gas cylinders, or we roast something on an open fire from time to time," he says.

And what about water and light?, we ask.

"We take water from the well, and we just make light with candles or a torch," he said. "In the spring, and until halfway through the summer, the sun dawns early and sets late, so it is not so bad."

In the mountains, the shepherds do not live in romantic huts 1,000 metres above sea level. They live in "box" caravans on wheels. They move along the slopes and valleys of the Low Tatras every several weeks, when sheep have grazed all the grass on the old pastures.

The caravan is home for more than six months of the year.

"Three of us live in one caravan, and two in the other one," he says.

When was the last time he was home?

"We drove the herd to pasture on April 1. And since then, I have not been home to Liptovská Kokava," he says, in the middle of the summer.

There is not much that would drive Šuňavec home, he says. He split with his wife, and their four sons are already grown. In the past, maybe it was easier for shepherds' marriages to survive, even though they were away for seven months of the year.

However, wives came to visit their husbands from time to time, and the other way around, too. Today, it is more complex.

"But my parents came here to see me," Šuňavec says with a smile.

He almost imperceptibly makes a move for the dog, Zora. She reacts immediately, and darts like a rocket, yapping, to the edge of the forest to return a lost sheep.

"This year, a bear attacked seven sheep, and even killed a small goat that we kept with the herd," Šuňavec says sullenly.

Suddenly, we understand why he watches the edge of the forest so carefully.

"One sheep was mauled by a lone wolf," he says. "But thanks to the fact that wolves are more timid, I managed to scare him away from the herd, waving my crook and shouting."

It has been a long time since Šuňavec was an apprentice at the agricultural training facility, and he has spent the last two decades pasturing sheep. We are curious, of course, about what kind of money a shepherd can earn. Šuňavec does not wish to elaborate on that too much.

But indirectly, we learn that it could be about Sk14,000 (€414) net - for all the Saturdays and Sundays, early mornings and long separations...

So, is this life romantic? Well, maybe a little bit.

"It is hard work, but you can get used to everything," Šuňavec said. "However, I am in the mountains, which I like very much. I even have something to compare it to. I spent a short period on the plains, in the vineyards. It did not suit me. There were no hills there, no fragrant meadows, no brooks. I feel at home here."

The long-term pasturing method is almost unique in Europe today. It is an integral part of the traditional culture and way of life for Slovaks in the mountains and sub-mountain regions. About 400,000 sheep are bred in Slovakia today - approximately 60,000 more than 10 years ago, and the same as after WWII. In the '70s and '80s, when sheep-breeding was subsidised and there wasn't any competition from non-communist countries in wool production, 600,000 to 700,000 sheep were bred in Slovakia.

People interested in more information can visit the Shepherd Museum in Liptovský Hrádok. It has been open for two years, and is part of the Liptov Museum in Ružomberok. It is unique not just in Slovakia, but also in all of Europe, according to the website www.liptovskemuzeum.sk.