The winner is fun

THIS YEAR'S Kremnica Gags festival proved that humour is truly international.
It was the first time the 27-year-old festival had a Central-European dimension, festival organiser Pavol Kelley told The Slovak Spectator. International comedians were added to the competition of professional and amateur performers. 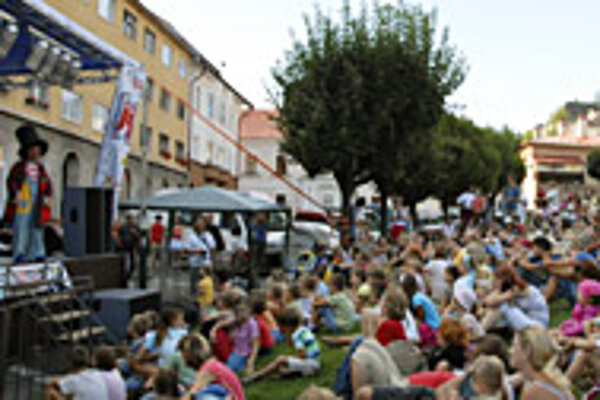 It was the first time the 27-year-old festival had a Central-European dimension, festival organiser Pavol Kelley told The Slovak Spectator. International comedians were added to the competition of professional and amateur performers.

"Suddenly, we felt the need to laugh together with our Polish, Hungarian and Czech colleagues as well," Kelley said. "Apart from the Visegrad Four countries, this year we have also included other European countries. This way, I think, we have managed to improve the quality of the festival."

Next year, the organisers would like to present humour from even more countries during the Gags festival, he said.

This year's Central-European Festival of Humour and Satire, Kremnica Gags, was held from August 23-26 in Kremnica, a medieval mining town where gold has been extracted since the 10th century. Performers came from Germany, Hungary, Poland, Switzerland and France.

"Gags has literally become international," festival president Milan Markovič, who is also president of the Academy of Humour, told The Slovak Spectator. "It is not just a phrase and we're not just bragging, as this time a Frenchman, an Italian, Hungarians, Polish people and Germans performed in Kremnica.

"I like Gags because it is intentionally devoted to humour. And there should also be humour in other places, and at any time."

Humourist Stanislav Štepka took part in Kremnica Gags for the fourth time. He is the founder of the famous Naive Theatre of Radošina, which performs virtually around the world.

He said he liked this year's Gags the most, as it gained an international dimension.

"Today, the district festival has become a truly Central-European festival of humour," he told The Slovak Spectator.

All kinds of humour

The festival was opened by Markovič and Speaker of Parliament Pavol Paška. While Paška tried to stay serious during the opening ceremony, Markovič left no doubt that he intended to start a deluge of humour.

He drove to the ceremony in a cheap Trabant mini-car, which had been produced decades ago in what was then East Germany. He was dressed in racing coveralls, mimicking Slovak President Ivan Gašparovič, who has made several public appearances dressed in similar silver coveralls.

"We have become used to the fact that at the end of August in Kremnica, fun wins," Markovič said. "Let us enable it to win even after August, after Gags. To win over stupidity, over all those modern depressions, and even over ourselves - if we deserve it."

He later raised a flag that resembled the presidential standard. But instead of the usual motto, "Truth wins," the words stitched on it read, "Fun wins".

The international festival continued in the way Markovič promised - with a lot of clownery, funny and funnier words, music, theatre acts and cartoons. In the outdoors, at the movie theatre and on alternative indoor stages, clowns, mimes, actors and musical ensembles performed; books were read; cartoons were exhibited; radio plays were heard; movies were watched.

The biggest success among the foreign performers was the French magician Carmelo, originally from Sardinia. The splendid musical clownery of Teatro del Chiodo from Switzerland was also a hit.

But the competitions did not run just between amateur groups and professionals, between various kinds of arts and genres, or between Slovak and foreign performers. Markovič's performance about famed actor and humourist František Dibarbora (1916-1987), who had his biggest success in the 1950's and 1960's, compared the past with the present.

"I don't want important humourists to be forgotten," Markovič told The Slovak Spectator.

"Humourists suffer, as they are not taken seriously by people even when they come with a serious message," he said.

The theme of comparing yesterday's life to today's was also present in productions dedicated to Kornel Földvári and Tomáš Janovic, two veterans of Slovak humour. And the Lane of Famous Noses paid tribute to famous Slovak humourists, such as the late Stano Radič and Jaro Filip. Two more relief sculptures were added to the collection this year: Katarína Kolníková and Ján Melkovič, who belonged to the Naive Theatre from Radošina.

In the last category, the Golden Gander was awarded to the Bratislava theatre troupe GUnaGU for their powerfully anti-racist play, John and Yoko. The writers and performers of the piece were Oľga Belešová and her husband Masahiko Shiraki, who comes from Tokyo.

The anti-award, called The Hit Goose, went to the Unknown Culprit for the collection of "ridiculous" broadcast license fees. (The company that collected the fees, currently at the centre of a legal dispute, couldn't be named for fear of a lawsuit.)

Humourist Ján Grexa stressed that every kind of competition is good.

"There were musical clowns here from Germany, Switzerland and Hungary," he said. "Every one of them was different, and every one was excellent. I laughed, but I was also moved - tears appeared, too. Both extremes of emotions were present."

Meanwhile, the musical competition included everything from punk to folk rock, said Peter Janků, the theatre expert and musician who presided over the jury that awarded the musical prizes.

Štepka from the Naive Theatre said Kremnica Gags is a splendid alternative to commercial TV programmes.

"Kremnica Gags proves that there is also humour of a different kind; that the programmes offered by commercial television, which brainwash viewers with primitive so-called entertainment, do have a polar opposite," he said.

Štepka, Grexa and Markovič agreed that Gags is becoming a true alternative to the growing commercialism of television comedy productions - not only on the commercial channels, but also on public TV.

"Unfortunately, the commercial principle has also been dominating on public TV - the dictatorship of low-level taste," Grexa said.

Štepka compared the role of performers in the totalitarian regime with their role in the present parliamentary democracy.

"During the totalitarian regime, the viewer had just one enemy - the state power - and today, he or she has several of them," he said. "But I think the crucial task should not be to fight during our whole lives and to seek enemies.

"One fan from Nitra wrote us that what he liked about the Naive Theatre of Radošina is that it does not search for enemies, but rather for friends. And I admit that searching for friends is my theatrical goal."

The event was also a success for the town of Kremnica, which was crowded during the festival. The shows were sold out and hopelessly packed.

"Gags is the culmination of summer season," said Kremnica Mayor Zuzana Balážová. "Every year, more and more people come. Last year, the number of visitors in Kremnica doubled during Gags, and this time, there are even more of them than last year.

"We are happy. These were four splendid days."