LABOUR Minister Viera Tomanová has survived a non-confidence motion in parliament.
The final vote came early on the morning of September 5 after a 17-hour blame game between the ruling coalition and the opposition.
The opposition wanted to have Tomanová sacked for what the Slovak Democratic and Christian Union (SDKÚ), the Hungarian Coalition Party (SMK) and the Christian Democratic Party (KDH) called a "moral and professional failure". 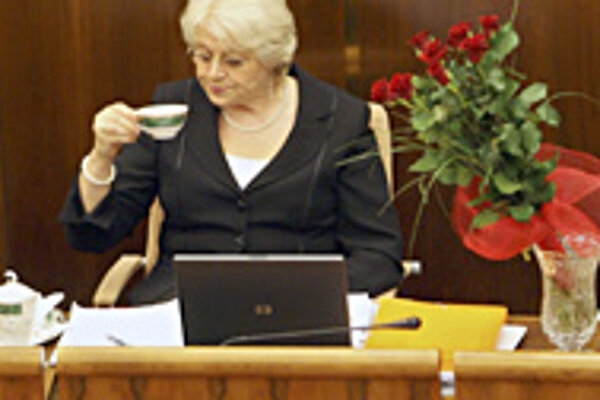 The final vote came early on the morning of September 5 after a 17-hour blame game between the ruling coalition and the opposition.

The opposition wanted to have Tomanová sacked for what the Slovak Democratic and Christian Union (SDKÚ), the Hungarian Coalition Party (SMK) and the Christian Democratic Party (KDH) called a "moral and professional failure".

Sixty deputies voted for sacking Tomanová, while 78 supported her. The opposition would have needed at least 76 votes to remove the minister.

Opposition deputies said Tomanová has jeopardised the pension savings of hundreds of thousands of citizens who are saving money in pension funds management companies with the way she has been trying to mend the hole in the budget of social security provider Sociálna Poisťovňa.

Tomanová and her team prepared a revision to the Social Insurance Act that, if approved by parliament, will allow people to quit the so-called capitalisation pillar of the pension system from the beginning of January 2008 until the end of June 2008.

The second, or capitalisation, pillar was one of the main attributes of former prime minister Mikuláš Dzurinda's old-age pension reform. It allows people to save for their pensions in private accounts administered by pension fund management companies.

The Slovak cabinet firmly supported Tomanová. Prime Minister Robert Fico said he was worried about his minister's health after all the hassles she had been through. He said the Slovak media has harassed Tomanová like no other politician in the past.

Fico said Tomanová has his full trust, as he considers her an expert in social affairs.

Deputy Prime Minister Dušan Čaplovič said Tomanová has only been trying to mend the pension system that "the government of Mikuláš Dzurinda devastated by bringing chaos and insecurity into it".

Tomanová's actions lack professionalism, said the chairman of the SDKÚ caucus, Stanislav Janiš. He said that even the National Bank of Slovakia (NBS) has had serious objections to her draft social insurance act.

Dzurinda, now the SDKÚ chair, told the SITA newswire that the parliamentary session was part of the opposition's fight to preserve the endangered pension reform started by his government. Dzurinda added that there was nothing personal in the attempt to oust the minister.

The opposition also said Tomanová has been creating fertile ground for cronyism at the ministry. Her ministry granted the non-governmental organisation Privilégium, Tomanová's previous employer, a subsidy worth Sk1.5 million (€44,400). Now the organisation has to return subsidies totalling Sk2 million to the state after officials discovered the group used misleading information to acquire the money.

The organisation owes more than Sk17.3 million to Sociálna Poisťovňa in payroll taxes and nearly Sk2.8 million in unpaid taxes.

Privilégium was granted the subsidy after its authorised representative, Miroslav Mečíř, signed a statement that his organisation had settled all its debts with the state.

MP Gyula Bárdos of the SMK said the ouster motion could not possibly overcome the parliamentary balance of power. However, he still considers it the opposition's duty to react to the minister's behaviour, the SITA newswire wrote.

Political scientist Miroslav Kusý said that initiating a non-confidence motion was a good move by the opposition.

"The opposition has to make itself visible even in cases where it does not have much chance for success," Kusý told The Slovak Spectator.

He added that it is the opposition's job to challenge the ministers.

"I do not think comments like 'it was just a circus' are justified," Kusý said. "When Fico was in the opposition, he was doing the same. He also knew very well that he did not have a chance to succeed but he continued initiating non-confidence motions, and he became a complete champion in fighting against the current opposition (which was then in power)."

Kusý said the prime minister has already crossed the line of rationality with his handling of the Tomanová issue.

"He seems to be engaged emotionally and cannot actually see the line," Kusý said. The healthiest move for Fico's political self-preservation would be to recall Tomanová, he added.