Breaking the ice in Prešov

STARÁ TEHELŇA - a community in Prešov that houses Roma, "rent dodgers", and other socially marginalised groups - is the setting for the final performance of the Stanica Východ festival on September 14.
Stará Tehelňa made headlines in 2005 when the local government planned to build a wall to separate the problematic area from its "normal" neighbours. 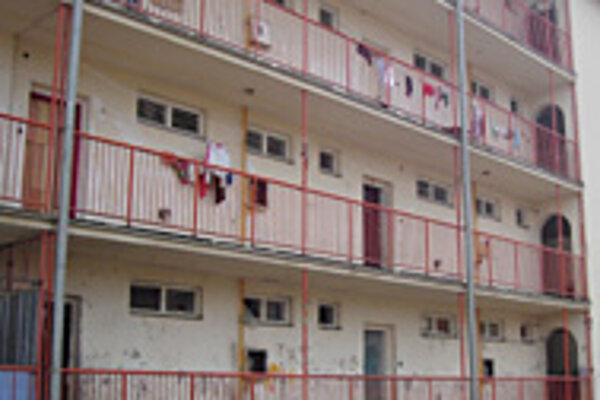 Font size:A-|A+0
STARÁ TEHELŇA - a community in Prešov that houses Roma, "rent dodgers", and other socially marginalised groups - is the setting for the final performance of the Stanica Východ festival on September 14.

Stará Tehelňa made headlines in 2005 when the local government planned to build a wall to separate the problematic area from its "normal" neighbours. The plan was eventually dropped due to pressure from international human rights organisations.

The Stanica Východ festival is the organisers' way of breaking the ice between the Roma and non-Roma people living in Prešov.

"We want to show that this is also a normal place, where people live, have fun, and go to work," Tomáš Lukačka, the head of co-organiser the Euforion association, told The Slovak Spectator.

"If we manage to attract even one person to Stará Tehelňa who would otherwise never have gone there," Lukačka continued, "we will have accomplished our goal. Of course, we don't expect the festival will make people immediately fall in love with each other, but we do want to confront those who have closed off their minds to the idea of ever going there."

"The festival is a very good idea," said Peter Németh from the Romar civic association, which runs a community centre in Stará Tehelňa. Németh added that he shares Lukačka's goal of breaking the prejudices that divide the people of Prešov.

Stará Tehelňa was built between 2000 and 2004 and consists of 176 small flats. Officially, the community has 1,676 residents, but local social workers have placed the actual number at around 2,500.

"Ninety percent of the community is Roma," Németh said, "sixty percent of whom are younger than 18. The unemployment rate is 98 percent."

Lukačka came up with the idea for the festival after meeting Dutch musician Merlijn Twaalfhoven, who uses music and art to heal cultural division. Twaalfhoven received international praise for his project in which musicians in both sides of Cyprus performed on rooftops so that their music could be heard across the militarised zone that divides the island.

"I think the most beautiful thing about people is that we're all different," Twaalfhoven told The Slovak Spectator. "The Roma in Slovakia deserve to be more valued for their rich heritage and living traditions, so I hope to learn from them and to create an interesting musical dialogue."

The festival starts on September 10 with a summer school for a select group of 12 to 20-year-olds from Prešov and Stará Tehelňa. The festival's organisers chose about 120 students from local basic schools to take part, but Lukačka expects only about 100 to be there on opening day.

"The students were most interested in the dance, singing, and visual arts workshops," Lukačka told the Spectator.

The film workshop involves students from university-level academies screening short films with the help of documentarians Adam Sebire from Australia and Marcel Pazman from Slovakia. The short films are based on both negative and positive experiences people have had with the Roma.

The final day's events start at 9:00 on September 14. Children will use coloured chalk to draw "The Promenade of Colours" from the centre of Prešov to Stará Tehelňa. At 19:00, spectators and musicians will follow the promenade to hear a performance of a composition by Twaalfhoven performed from balconies. Afterwards, the podium in the community will be the venue for additional concerts by IMT Smile, Twaalfhoven, the Farsa Duo, and the participants of the summer school, among others.

"My compositions will be made up of unusual combinations of musicians of different and often contrasting styles," Twaalfhoven told the Spectator. "I will also create sound performances with children and students that have a large musical effect and a spectacle."

A documentary by Sebire and Pazman will be another outcome of the festival.

"We are very honoured to have a documentarian as acclaimed as Sebire cooperating with us," Lukačka said, adding that he plans to send the documentary around to festivals.

Lukačka also hopes to arrange a performance in Amsterdam for the most promising participants of the summer school, but will wait to see how things work out at the festival first.

"The children should know how it is important to aspire," Lukačka said.