DO YOU want to see a sample of what's been playing on stages across Central Europe? Go to Nitra.
Between September 21 and 26, this western Slovak town will host Divadelná Nitra, the International Theatre Festival, which is staging the most interesting and thought-provoking performances by top European troupes and Slovak theatres. This year's festival is subtitled Middentity.
"It's a combination of 'middle' and 'identity'," festival director Darina Kárová explained to The Slovak Spectator. 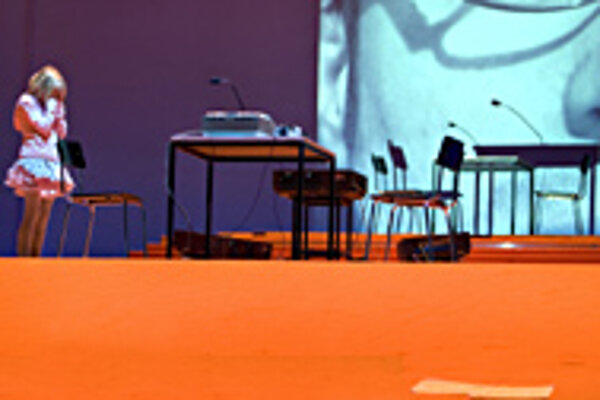 Font size:A-|A+
DO YOU want to see a sample of what's been playing on stages across Central Europe? Go to Nitra.

Between September 21 and 26, this western Slovak town will host Divadelná Nitra, the International Theatre Festival, which is staging the most interesting and thought-provoking performances by top European troupes and Slovak theatres. This year's festival is subtitled Middentity.

"It's a combination of 'middle' and 'identity'," festival director Darina Kárová explained to The Slovak Spectator.

The term symbolises looking for answers to questions of cultural and existential identity in Central Europe, which is literally between Western and Eastern Europe and is experiencing rapid change.

The subtitle is also linked to the title of a performance prepared exclusively for the festival. It consists of seven short pieces prepared by seven directors from seven countries (Austria, Croatia, the Czech Republic, Hungary, Poland, Slovenia and Slovakia).

"At a time when borders are starting to disappear within Europe, we have decided to examine how culture, history, habits, national memories and global influences have mixed into the life of ordinary people," Ján Šimko, the performance's dramaturge, told the Pravda daily.

The festival defines Central Europe as the countries within the vertical line from Slovenia to Poland.

"These countries share a common history and problems," Kárová told the Spectator. "They have also joined efforts in the last few decades to work through major changes and discover their identity."

The main programme of the festival's 16th year offers numerous directors and troupes, some of which will be performing at the festival for the first time. As well as Central Europe, the troupes come from Germany, Italy, and Norway.

"The main programme consists of several themes," said Kárová. "Middentity is the common thread, but they differ. Most of them are linked with identity."

Schiller's Don Carlos, directed by young German Nicolas Stemann and performed by Deutsches Theater Berlin, is the highlight of the main programme.

"This was a top play in the German-speaking scene last season," Kárová told the Spectator.

She lists the play among those about power, manipulation, and totalitarianism, even though it's a classic.

The Polish performance Transfer!, rehearsed by the contemporary provocateur Jan Klata, speaks about the expulsions of populations after the Second World War.

"It is about exodus on all levels, which is an experience Central Europe shares with only a few other places in the world," Kárová told the Spectator. "This performance bears a historical message and depicts the trauma."

Director Béla Pintér will arrive from Budapest with The Queen of the Cookies. The Czech Republic's Dejvické Divadlo will present Elective Affinities, a work by Jan Antonín Pitínsky that's based on Goethe's novel.

The Brothers Karamazov will be a presentation of both Slovak and Hungarian dramatic art, as Slovak director and actor Martin Huba prepared it with the Hungarian-language Jókai Theatre from Komárno. The Slovak scene will also be represented by the Aréna Theatre, which will perform Dr. Husák, directed by Martin Čičvák.

The American Dream Today is one of the festival's special performances. During seven evenings, Norwegian photographer and journalist Petter Alexander Goldstine, who spent six years living with American homeless people, the Roma, Israelis, Palestinians and other people on the outskirts of society, will discuss his experiences over freshly-made food.

In line with the international standard of similar festivals, all performances of the main programme will be simultaneously interpreted into English or have English subtitles.

The first day of the festival will also be the forum for the Dosky (Boards) Awards, which celebrate the most outstanding performances on the Slovak threatre scene last season.

The festival will also show films, hold some exhibitions and street performances, and open local galleries and museums from Saturday to Sunday.

The films were selected to match the theme of the main programme.

"They once again touch on identity or 'middentity' and, like the main programme, go deeper than what's in the mainstream," Kárová said.

What: The International Theatre Festival

Where: venues in Nitra