THE CODE for the CDs presented to the prosecutor general by former prime minister Vladimír Mečiar three years ago, allegedly containing information about the clients of the country's notorious failed pyramid schemes, has finally been cracked. 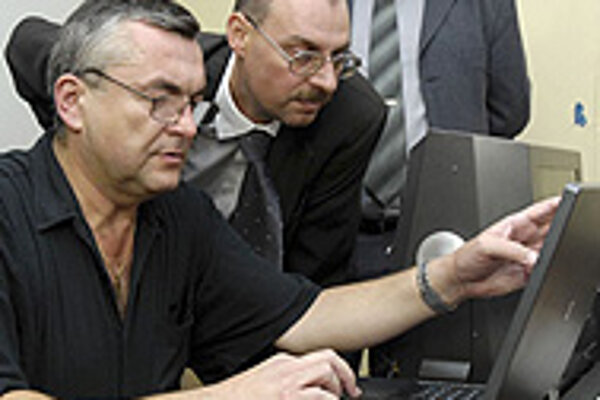 Font size:A-|A+
THE CODE for the CDs presented to the prosecutor general by former prime minister Vladimír Mečiar three years ago, allegedly containing information about the clients of the country's notorious failed pyramid schemes, has finally been cracked.

Prosecutor General Dobroslav Trnka opened an envelope on September 13, in the presence of journalists from newswires, that included the CDs and the code for unlocking the information contained on them.

The CDs in the envelope are alleged to contain important data about the non-licensed deposit companies BMG Invest and Horizont Slovakia. Trnka said the envelope also contained the password for decoding the material, supplied by the Slovak intelligence service (SIS).

As of press time, Trnka had not yet had time to study the materials, a spokesperson for his office, Jana Tökölyová, told The Slovak Spectator.

According to the SITA newswire, the CDs contain 700 Mb of data about clients of BMG Invest and Horizont Slovakia, including their assets and account numbers.

SITA quoted Trnka as saying that all data from the database would have to be checked thoroughly.

Mečiar, the leader of the Movement for a Democratic Slovakia (HZDS) party, claimed he got the CDs in 2004 from the owner of the non-licensed deposit companies, Vladimír Fruni. But he declined to comment on what they contained, saying he had not yet studied them.

"If there are names of clients who have profited from their investments, and if they are included in the group that did not pay or did not fulfill their tax liabilities, they could be (guilty of) tax offences," he said.

At a press conference on September 10, Prime Minister Robert Fico hinted at the contents of the CDs.

"It is probable that in Slovakia, there are people who knew about the developments in the non-licensed deposit companies and took their money from them shortly before these companies went broke, thus saving themselves - while others did not have such information," Fico said.

Mečiar said something similar in June 2005. He claimed that the CDs included the names of politicians who were clients of the pyramid schemes, and who got rich thanks to their bankruptcy.

"I know most of the names that are there," he told the private TV channel Markíza on June 2, 2005.

These days, Mečiar's claims about the mysterious records are much more cautious.

"We do not wish to say anything beforehand," he said on September 10. "There were specific tips and names, but if they are really there - let us wait for several days."

Back in June 2005, Mečiar could not specify precisely what he gave to the Prosecutor's Office.

"It was a cassette recorded on a CD," he told Markíza. "Two hackers have decoded this cassette, and the names of all the (clients) are listed there."

Dušan Muňko, a Smer MP at the time and currently the state secretary of the Environmental Ministry, said later that month that there was a disc on which Fruni recorded information about the deposits and withdrawals of the top public officials.

Mečiar alleged there are several copies of the CDs - two of which he gave to independent public offices and one he kept for himself.

He said every piece of information on the CDs must also be available in written form in the documents seized by the police.

"This is a safeguard," he said. "If something got lost from the documents, now it can be found.

"We are interested in companies, amounts, names of individuals and politicians," he told journalists.

Mečiar said names from the decoded record should be published. He told media he deserves to be informed of the contents, as he brought the record to the Prosecutor General's Office.

He said he talked with Trnka about the CD over the phone.

"We arranged to look at the discs together," he told journalists.

Mečiar promised journalists that if it was not explicitly forbidden to publish the contents of the documents, he would publish them.

"I can even publish the things that Prosecutor's Office and police cannot," Mečiar told the media on September 7.

"If there is really any information that could put someone in an interesting light, let it be shown," Fico said at a press conference on September 10.

But Trnka was opposed to publishing the names and the contents of the CDs.

"I see no reason why it should be me who publishes this," he told the TA3 TV news channel on September 6.

On September 13, he repeated he would not give the decoded password to anyone except the authorities - not even to Mečiar.

Opposition politicians and political analysts have questioned the authenticity of the recording.

"I can imagine that people could be intentionally put on such a list without having the slightest idea about it," Ladislav Pittner, former interior minister for the Christian Democratic Movement party (KDH) and head of the SIS, told The Slovak Spectator.

Mečiar did not specify how he received the CDs. He is already well-known for finding confidential materials in ways he cannot explain.

For example, in 1990, when he was prime minister, he claimed he found records from the intelligence files of the communist-era secret police (ŠtB) on his desk.

"I arrived at work and found an envelope on my desk, in which there were three files," he said, as quoted in Marián Leško's book, Mečiar and Mečiarism.

Some journalists, however, found it peculiar that the prosecutor only invited reporters from the country's two newswires, SITA and TASR, to the opening the envelope with Mečiar's material. When asked about the proceeding, Tökölyová told The Slovak Spectator that "it was a decision of General Prosecutor. He decided to do so in order to inform journalists as impartially as possible. Thus, all have the same starting line.

"The General Prosecutor has the right to do this," she said. "The agencies' newscast is... is accessible for all of you (journalists), one agency as well as the other, or both of them. The Prosecutor General's Office buys the broadcasts of both agencies, just to be sure."