PRIME Minister Robert Fico has been pouring criticism on pension fund management companies - essential players of the pension system initiated by the previous government - but he sat down at the bargaining table with them last week. 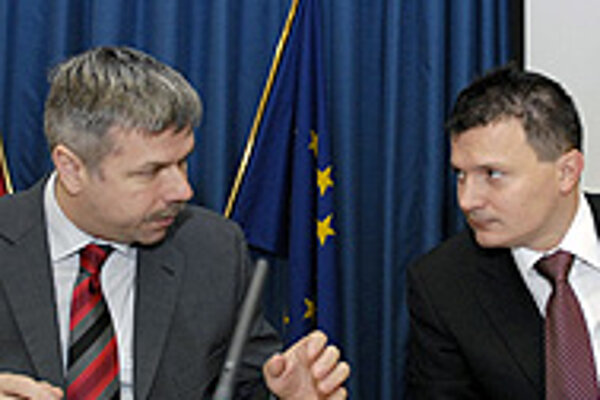 Font size:A-|A+
PRIME Minister Robert Fico has been pouring criticism on pension fund management companies - essential players of the pension system initiated by the previous government - but he sat down at the bargaining table with them last week.

Earlier this year, the prime minister compared the companies to pyramid schemes and said that their losses might endanger the future payout of pensions. His team, led by Labour Minister Viera Tomanová, drafted a revision to the Social Insurance Act that would allow people to quit the capitalisation pillar from the beginning of January 2008 until the end of June 2008.

The capitalisation pillar, or second pillar, allows people to save for their pensions in private accounts administered by pension fund management companies. It was one of the main attributes of the Mikuláš Dzurinda cabinet's old-age pension reform.

If the pension fund management companies do not commit to these guarantees, the government will not negotiate and will make the capitalisation pillar voluntary, Počiatek added.

The parliament was scheduled to start discussing the act on September 13.

The Association of Pension Fund Management Companies (ADSS) has been analysing the government's proposals.

"We are not reluctant to provide any guarantees, but these need to be defined in a way that benefits the clients," Ivan Barri, executive director of ADSS, told The Slovak Spectator. "Any guarantee of returns on the long term brings lower returns. If investments are made into deals with 'guaranteed' returns, such as state bonds or bank deposits, you will have lower returns than those from more risky tools with a potential of higher returns."

Meanwhile, the country's central bank rose to the defense of the capitalisation pillar, saying the system is safe enough.

"Any change made to the second pillar now will mean larger problems in the future," said the governor of the National Bank of Slovakia, Ivan Šramko.

Šramko said the system will work if it is kept compulsory. The system, as it was designed, pushes the government to keep the shortfall of the social insurance system under control and cut deficits. The government should use its own resources to cover the deficit, rather than lowering payments to the capitalisation pillar, he added.

"The state has had higher revenues than expected, so these funds should be used to fill the deficit," Šramko told the press.

Počiatek said the companies don't currently guarantee any yield, not even a preservation of the principal invested, the TASR newswire reported.

But every investment carries a certain risk, which was clearly communicated when the second pillar was launched, Šramko said. He added that even the first pillar, the so called pay-as-you-go pillar, has risks in the form of a deficit.

Currently, employers transfer 18 percent of employees' gross salary to the old-age pension system. One half of this sum goes to the state-run social security provider, Sociálna Poisťovňa, which constitutes the first pillar of the pension system. The remaining nine percent goes to private pension fund management companies.

The first package proposed by the government included an option for payments to the capitalisation pillar to be temporarily reduced to less than nine percent of the gross salary, with the option of gradually increasing that after a certain time period, Barri said.

"We can imagine this option working if the payments later exceed nine percent, which is the current level," Barri said. "We also expect to reach a societal consensus on this matter - a constitutional law which will not be constantly changed."

It is important that the funds taken away from clients today will be returned to them, Barri said. Over the long-term, it will bring them more money if they see less on their accounts for three years and receive more over the next 20 years, he added.

Earlier this year, Fico compared the operation of these pension fund administration companies to the ill-fated pyramid schemes that stripped more than 100,000 Slovak clients of a total of Sk14 billion (€418.1 million) a couple of years ago. The government cannot guarantee that the situation around pension fund administration companies will not become similar to those seen in the unlicensed deposit companies, Fico said.

Šramko has restated on several occasions that the private pension system in Slovakia is safe because it is based on multiple controls, with the clients' funds strictly separated from the assets of the pension fund management companies.

Fico said that in 2005 and 2006 alone, the private pension companies posted losses exceeding Sk1.5 billion put together, and claimed that the trend is getting worse.

According to Šramko, the losses that the companies have posted so far can be explained by the fact that the whole system has only just been launched. Some of the companies used legal accounting techniques to include all the initial costs in one year, the TASR newswire wrote.

The prime minister also published the wages of top managers of the private pension management companies, sug-gesting that while the companies are losing money, the managers' salaries are still high. However, Fico refused to say where he got the information.