The lesser of two evils

THE 'LAW of the year', as Prime Minister Robert Fico called the revision to the country's Labour Code, has posed some tough challenges for Slovakia's health care sector.
Regulations that limit overtime work mean the country's hospitals are faced with a dilemma: they can either hire new employees, or let physicians and nurses keep exceeding the overtime limit and violate the Labour Code. 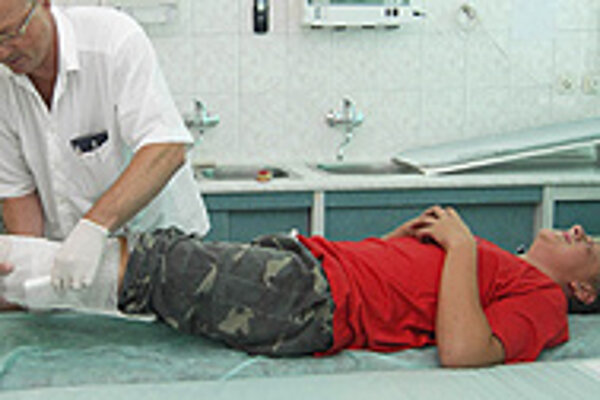 Font size:A-|A+0
THE 'LAW of the year', as Prime Minister Robert Fico called the revision to the country's Labour Code, has posed some tough challenges for Slovakia's health care sector.

Regulations that limit overtime work mean the country's hospitals are faced with a dilemma: they can either hire new employees, or let physicians and nurses keep exceeding the overtime limit and violate the Labour Code.

However, the Labour Ministry is confident that despite complications with the health care sector, the code that took effect on September 1 will have a positive impact in the long term.

"Changes made to the Labour Code will positively influence the labour market," Olga Škorecová, a spokeswoman for the Labour Ministry, told The Slovak Spectator. "The Labour Code gives more security to employees."

Some employers have already reported that they had to hire new staff as a result of the new code - specifically because standby time is now included in working hours, Škorecová said.

Until now, employers had to make sure that their employees did not work more than 48 hours a week, including overtime. But since September 1, employers must keep all the hours worked - regular working hours, overtime and standby time - below 48 hours.

However, health care workers have seen their working hours increase to 56 hours after the Health Ministry warned that 48 hours would not be enough. This exemption was granted to the health care sector on the basis of valid EU legislation.

The extension to the working hours can be only applied if the employee agrees, Škorecová said.

But health organisations still say they have to choose between two evils: they either violate the Labour Code or they fail to provide adequate health care to patients.

"The recent development only proves what the Association of Slovak Hospitals was saying before the law was adopted: it will cause huge problems for the health care sector," the president of the Association of Slovak Hospitals, Marián Petko, told The Slovak Spectator. "The health care sector cannot comply with the legislation due to the lack of physicians and nurses."

Fully following the new code would also cause a 30- to 40-percent drop in the income of health care employees, and result in fewer surgeries and a decline in the effectiveness of health care overall, Petko said.

"It's possible that the Labour Code was guided by good intentions, but without putting finances into the system, the legislation poses an often unsolvable situation for hospitals," he added.

The revisions to the Labour Code will actually make it more difficult for hospitals to secure their emergency operation after regular office hours, health care experts said.

The Labour Ministry said it understands the statements from health care sector employees, but the legislation is in line with EU regulations. Back in 2003, the European Court of Justice ruled that the time hospital doctors are on-call should be considered as working time.

"In practice it means that hospitals will have to hire more physicians to secure stable health care without endangering the health of the employees or the patients," Škorecová said. "The ministry cannot change the provisions of the Labour Code in a way that it contradicts the EU legislation."

The head of the Slovak Trade Union of Health Care Workers, Anton Szalay, said this is not a new situation, and that hospitals have been exceeding the legal working hours for a long time.

Physicians worked an average of 800 standby hours last year, plus 200 hours overtime, according to Slovak Radio.

The Association of Slovak Hospitals has already proposed that health care employees should be excluded from the Labour Code and function under a special regime instead.

"Another solution is to pour more money into the system and lift Slovakia to the level of EU countries," Petko said. He added that pay raises for health care employees would stop physicians and nurses from leaving to seek work abroad.

"The patient will pay the highest price for the Labour Code," Petko said.

The new Labour Code also requires the employer to arrange work shifts in a way that employees have at least 12 subsequent hours of undisturbed daily rest between the end of one shift and the start of the next. This time off can be reduced to eight hours for an employee older than 18 during urgent repair works, emergencies or activities that eliminate life-threatening situations or protect the health of employees. The resting time between two shifts cannot be shorter than eight hours even if the employee works overtime.

It gives more powers to the unions, limits overtime work, toughens conditions for fixed-term employment contracts and limits the use of trial periods before signing a permanent-status contract with an employee. The new Labour Code also bans the employer from terminating a fixed-term work contract without a legal reason and guarantees severance payments for employees who are fired due to restructuring.

However, employees now have more power and can immediately terminate a work contract when their employer refuses to cover the costs of a foreign business trip, for example.

Fico said that all this finally brings the country's labour legislation up to par with European Union standards.

With files from Jana Liptáková