Mergers and acquisitions on the agenda

THE COST of bank services in Slovakia rose 10 percent last year, but the average Slovak resident still pays less for banking fees.
According to a report from Symsite Research, each bank client paid an average of Sk2,384 (€71) in fees last year, the Hnonline.sk website reported. 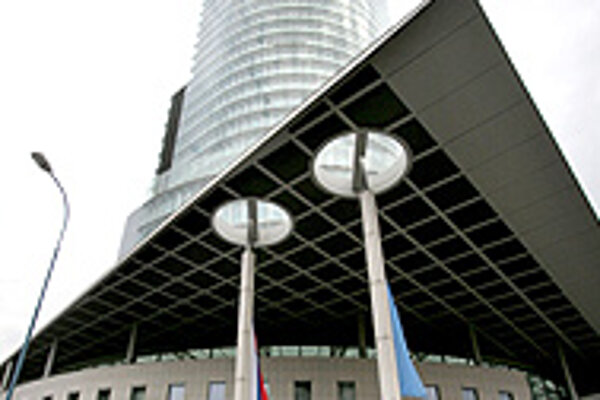 According to a report from Symsite Research, each bank client paid an average of Sk2,384 (€71) in fees last year, the Hnonline.sk website reported.

But according to the World Retail Banking Report 2007, Slovaks pay less for bank services than customers in other countries - the global average is more than Sk2,600 a year.

Slovak banks charge the most for account-keeping, cash handling and fees for payments. Banks also continue to raise the fees for cash withdrawal at the branch, in order to encourage clients to use electronic banking.

THE SLOVAK Anti-trust Bureau (PMÚ) has approved the merger of Penta Investments Limited, a Cypriot company, and the Slovak Privatbanka, the TASR newswire wrote.

"The merger gives the Penta company direct exclusive control over the operations of the Privatbanka company based on two contracts about the purchase of shares," PMÚ spokesperson Alexandra Bernáthová said.

FIVE years after OTP Banka Slovensko entered the Slovak market, its shareholders have decided to change its corporate identity.

OTP Banka general manager Ernö Kelecsényi told a press conference that the company needed a new communication style because of developments in the market. As a result, the OTP Banka logo got a new colour, font and shape.

The cost of the re-branding in Slovakia totalled €1 million (approximately Sk33.7 million).

"We calculated these expenditures into the budget for this year," Kelecsényi said. "So it will not significantly affect the company's economic performance in any way."

The Hungarian OTP Bank, the majority shareholder of OTP Banka Slovensko, is changing the corporate identity of its banks and daughter companies in all Central and Eastern European countries.

Debit cards get a new look

SLOVAK bank clients can now pay with debit cards bearing the face of their partner, a charity symbol, or the work of a famous artist.

There are 4.5 million debit cards in Slovakia, and so far, 95 people have designed their own. But experts say it is only a matter of time until all the cards with standard bank designs will be replaced by personalised cards, the Sme daily wrote.

"Overly-provocative bodies as card images are on the edge, and we refuse them most of the time," said the ČSOB manager for debit cards, Roland Katona. "Many people try to choose the logos of their favourite sport clubs for the design."

This is banned by the copyright act, but businesses can put their own corporate logos on their company cards.

"It is not unusual to find a company logo on a company's debit cards," said Ján Čarný, MasterCard Europe's general manager for the Czech Republic and Slovakia. By putting its logo on the cards, the company can promote itself every time their employees pay, making itself distinctive from competitors at the same time, he said.

There can be other benefits to personalised cards.

"If the card holder puts his own picture on the front side, the picture works as an additional protective instrument," Čarný said.

POLAND'S BRE Bank will start operating in Slovakia and the Czech Republic in the last quarter of this year, bank general manager Slawomir Lachowski told the Polish PAP newswire.

The bank will open eight branches in Slovakia and 10 branches in the Czech Republic under the name mBank, which is the trademark of BRE's internet banks, the TASR newswire reported.

According to the official statement, the bank has all necessary licenses for doing business in both countries. The branches should become profitable in four to five years, bank projections show.

In Poland, mBank currently owns a network of 15 financial branches where clients can ask for credit or use web services. The bank also has more than 50 kiosks under the name KIOSEK in major Polish shopping malls.

BRE's mBank is a retail division of its online banking services. It specialises in big businesses, international companies, and in modern and quickly-developing companies in the small and mid-sized business sector. Its services are used by more than 1.3 million clients, and it has PLN7.5 billion (Sk66.3 billion) in assets.

BRE Bank is a unit of Commerzbank, the second-biggest bank in Germany. Commerzbank owns more than 70 percent of the BRE Bank, as the PAP agency informed.

SLOVAK banks loaned 11.5 percent more to their retail customers in the first six months of 2007.

The total amount of the loans was Sk242.8 billion (€7.2 billion) as of the end of June, the SITA newswire reported.

According to the National Bank of Slovakia (NBS), most of the growth was caused by real estate loans. The amount of real estate loans increased by 11.6 percent compared to the beginning of this year, reaching a total of Sk169.6 billion.

Slovaks drew a total of Sk38.7 billion consumer credits as of the end of June, an increase in 7.2 percent.

A LATE-2006 advertising campaign from the Všeobecná Úverová Banka (VÚB) violated the advertising code of ethics, the arbitration committee of the Council for Advertising (AK RPR) decided at its meeting.

The campaign offered clients the option of paying their entire loan early without any penalty fees, and stressed that as one of the main benefits of choosing the loan, SITA reported. But after the ad campaign ended, VÚB cancelled the option and started charging premature repayment fees at a rate of five percent.

This could have misled clients about the conditions of loan offered by the bank, which were not fulfilled after the end of campaign, the council ruled.

"So far, it's mainly more solvent investors who are putting their money into real estate funds," said Roman Vlček, chairman of the board of the Slovak Association of Investment Fund Management Companies. "But if they meet the needs of a regular client, we can recommend them for him or her, too."

The minimum investment required for real estate funds is Sk100,000, which is 10 times higher than for other funds.

The financial advisor of the FinCo & Partners company, Ivan Sedílek, said there are some foreign real estate funds where Sk25,000 or 30,000 is enough for the first deposit.

Unlike other funds, real estate funds have the disadvantage that people can wait up to one year to have their money paid out, under the law. However, fund management companies say they are ready to pay out the money earlier, within several weeks at the latest.

Most domestic real estate funds will probably be oriented towards properties across all of Europe, but with an emphasis on the Central European region so they can profit from the faster-growing real estate prices there, Vlček said.

HUNGARY'S OTP Bank has its eyes on buying another Slovak bank in order to expand its market share.

"It is difficult to increase the market share on the Slovak banking market," OTP Banka general manager Ernö Kelescényi told the ČTK newswire. "The shareholder is considering the purchase of another bank."

Kelecsényi did not specify the name of the company that OTP is interested in. He said the purchase could happen later this year or next year.

Most banks on Slovak market already have foreign owners. The four biggest players - savings bank Slovenská Sporiteľňa, Všeobecná Úverová Banka, Tatra Banka and UniCredit Bank - have a 60 percent share on the market, according to Kelecsényi.

Recently, speculation appeared in the media about the possible sale of the postal bank, Poštová Banka, which is currently controlled by Slovak owners.

THE J & T Finance Group has started re-structuring the small Russian bank it bought in April.

J & T started its re-structuring of the Tretij Rim bank this summer, and it is currently working intensively on market analyses.

The plan is for the Russian bank to accurately follow the way J & T banking institutions have developed in the Czech Republic and in Slovakia. The bank will focus on private banking, project financing, and trading on the Russian capital market.

"For us, the bank is more than an entry into the Russian banking market," the president of the J & T Group, Jozef Tkáč, said in a statement. "Instead, we see it as the heart of all the future activities we intend to develop in this country.

"The main issue, like it is in the Czech Republic and Slovakia, is real estate development and corporate investments, but we also want to focus on investments in hotels and tourism.

"It is necessary to make all our steps with regard to the differences in the local market. One of the many questions we are trying to answer is the future name of the bank, as it is not simple to transfer the name 'J & T' into Russian," Tkáč added.

Immediately after making the capital investment, the new shareholder focused on strengthening the bank's capital to 500 million roubles with the prospect of further growth, company representatives told the media.

"Our goal is to get the bank among the top hundred Russian banks in several economic criteria, in the shortest possible time," Tkáč said. "This is the only way to set it apart from hundreds of other players on the Russian Federation's bank market in the future."