SLOVAKIA'S international football team only gained one point from its two Euro 2008 qualifying matches last week. But Bratislava businesses and tourism gained a lot more from those 180 minutes of football. 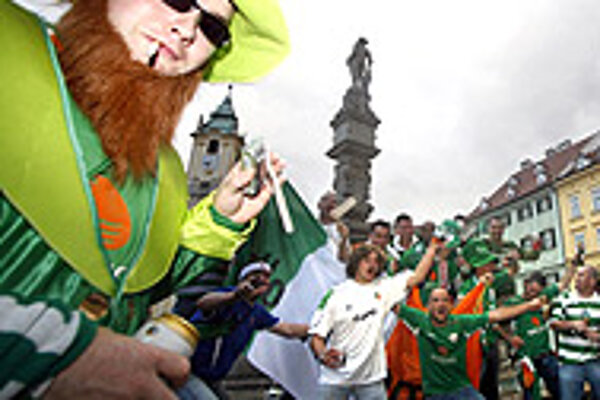 Font size:A-|A+
SLOVAKIA'S international football team only gained one point from its two Euro 2008 qualifying matches last week. But Bratislava businesses and tourism gained a lot more from those 180 minutes of football.

About 6,000 to 7,000 Irish fans descended on Bratislava for the Ireland-Slovakia match on September 8. And 700 arrived from Wales for the game in Trnava on September 12, according to The Guardian.

The Irish presence was felt throughout Bratislava's Old Town all weekend long, before and after the Saturday game. Throngs of fans draped in green and orange congregated at bars and paraded through the streets, occasionally breaking into spontaneous chanting.

"I think every Irish person in Bratislava was here," said Mária Evincová, manager of the Dubliner Irish Pub on Sedlárska Street, told The Slovak Spectator. "It was full for four days, and it was full-full. I think it was a record."

Slovakia earned a draw with Ireland after an injury-time goal evened the score at 2-2. And they lost 5-2 to Wales, meaning a berth in next year's European championship is a long shot.

But downtown bars and restaurants did a booming trade. Evincová wouldn't reveal the Dubliner's sales results, but she said they were well up.

The Gremium pub on Gorkého Street was packed with fans, foreign and local, watching the game on the big screen, said Gremium's Lucia Messingerová.

"On the day of the football match there were about 150 to 160 people in Gremium," she said. "Of course, business for Gremium was about 50 percent better on this day."

Those kinds of numbers aren't unusual for big international sporting events, like this spring's World Hockey Championships, she told The Slovak Spectator.

Hotels were also big winners. All the hotel rooms in Bratislava were booked on the weekend, said Michal Novotný, a receptionist at the downtown Hotel Kyjev.

"It was totally full," he said. "(Wednesday) there were some free rooms, but not much, because the game was in Trnava."

Those kinds of bookings are unusual for this time of year, he said.

Aside from the extra business drummed up in Bratislava during the football madness, there could also be long-term benefits for the city, said Hilda O Riain, deputy head of mission at the Irish Embassy. Fans who enjoyed themselves could spread their favourable reviews of Bratislava back home or make return trips.

"I think it's good for the city, and the press back home has been really good as well," she said. "I think the fans really enjoyed themselves here - the beer was cheap, the pubs were plentiful, the atmosphere was great, and the Slovaks were very friendly."

The Irish Embassy in Bratislava had been gearing up for the match since the official ticket sales started in Ireland. It put together an eight-page information leaflet for travelling fans that included everything from emergency information about the embassy to tips for using public transit.

The information was available on the Irish foreign affairs department website and the Irish football association's website, and a smaller information pamphlet was distributed at all of the city's information centres.

"In Ireland, fans tend to travel with the team in large numbers," O Riain said. "We have learned that the more information they have in advance, the smoother it goes."

For example, the embassy advised fans to carry photocopies of their passports when they were out on the town.

"As a result, we had hardly any lost passports," O Rian said.

While a lot of Bratislava residents are uneasy about groups of British stag party tourists, their impressions of the Irish football fans seemed to be more favourable, O Riain told The Slovak Spectator.

"The fans behaved themselves very well," she said. "And I think everyone in town this weekend had a good time with our fans.

"I'm sure when people see dozens of green-clad, mainly men, coming here, it might have seemed a little frightening. But I think Ireland left a very good reputation here, as they have other places where they've travelled."

The 250 or so Irish football fans staying in Hotel Kyjev, which has a 310-person capacity, made a noticeable difference in the hotel's atmosphere, Novotný said.

"It was much more lively in the halls and the café," he said. "One older Slovak couple came on Friday and they said, 'What is this?' We told them there was a football match.

"They stayed, because there were no free hotel rooms in Bratislava."

Novotný said the Irish fans at the hotel were spirited and "most of them were drunk," but they didn't cause any trouble.

In fact, the embassy recorded no major problems as a result of the football-related festivities, O Riain said. Neither did the police, according to Bratislava Police spokesperson Alena Toševová.

At the Dubliner, extra security staff were brought in to ensure the safety of the larger crowds.

"But we didn't need them because there were no problems," Evincová said. "(The bar staff) feel good, I think, because nobody thought the Irish people would be as friendly as they were."