GERMAN ARTIST Einar Turkowski won the Grand Prix of the Biennial of Illustrations of Bratislava (BIB) 2007 on Setember 7. The international jury unanimously chose the young artist for his innovative storytelling style and the high professional level of his work, Rosmarie Tschirky from Switzerland, the head of the jury, told the SITA newswire. 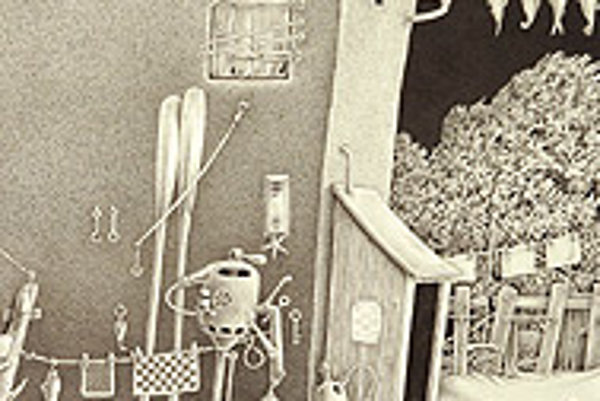 Font size:A-|A+0
GERMAN ARTIST Einar Turkowski won the Grand Prix of the Biennial of Illustrations of Bratislava (BIB) 2007 on Setember 7. The international jury unanimously chose the young artist for his innovative storytelling style and the high professional level of his work, Rosmarie Tschirky from Switzerland, the head of the jury, told the SITA newswire.

"The pictures invite the reader to join the artist in his original, poetic, and magical world," the jury wrote in its statement. "His skillful black and white drawings radiate with humour, emotion, intelligence and ... colour," it reads.

"It is amazing to receive only positive responses from all sides," Turkowski said at the awards ceremony in the historical building of the Slovak National Theatre on September 7. "I worked on this project for three years, so I'm very pleased to receive such praise," he said. Along with a golden sculpture of the award, he received a check for $3,000. BIB awards are regarded as a stepping stone to a promising career for young artists.

A total of 388 illustrators from 38 countries entered the competition this year, submitting 2,740 illustrations from 477 books for consideration.

The jury selected the winners of the BIB prizes between September 3 and 6. Illustrators Kamila Christiansen from Denmark, Iwona Chmielewska from Poland, Ivan Alexandrov from Russia, Alenka Sottler from Slovenia, and Farshid Shafiee from Iran received BIB Golden Apple awards.

The eleven prizes awarded at each BIB ceremony also serve as a guide to how children's books should look and show the main trends in illustrations, art historian Antónia Paulinyová wrote in the Sme daily. From this point of view it is important that out of a majority of colourful illustrations black-and white pencil sketches received the top prize, she wrote.

The illustrations which competed for the BIB awards are exhibited in Dom Kultúry (the House of Culture) at SNP Square in Bratislava. As well as this exhibition, visitors can see there works by Ali Reza Goldouzian from Iran, winner of a previous BIB, and laureates of the Hans Christian Andersen prize for illustration Margaret Mahy from New Zealand and Wolf Erlbruch from Germany. Slovakia is represented by Viera Gergeľová, who illustrated, among other things, Čin-čin, by Ľudmila Podjavorinská.

Bibiana, the international house of art for children, introduces works by young Slovak illustrator Ľuboslav Paľo, who received the BIB Golden Apple in 2005.

Children can look forward to workshops, film screenings and theatre performances to be held as part of BIB. "The aim of BIB is in particular to draw young visitors back to culture," Peter Tvrdoň, the main manager of BIB told the TASR newswire. He thinks that every child should visit the exhibition because nowadays society focuses too much on consumerism, and because, in TV and film, children are too often exposed to negative influences.

The exhibitions will last until October 26.