EVERYONE had settled into their seats at the Slovak National Theatre's historical building for a performance of Carmen on September 6 when an announcement was made from the stage. 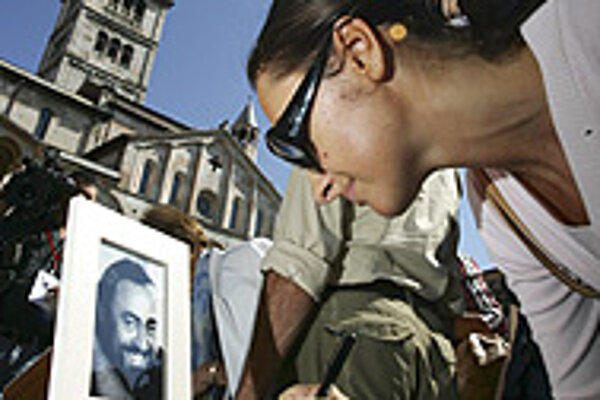 Font size:A-|A+0
EVERYONE had settled into their seats at the Slovak National Theatre's historical building for a performance of Carmen on September 6 when an announcement was made from the stage.

It was the evening's conductor, Dušan Štefánek, asking for a moment of silence in honour of Luciano Pavarotti, the 71-year-old opera legend who had died of pancreatic cancer early that morning.

The gesture was one of the number of ways Slovakia has been mourning the passing of the man known affectionately as maestro.

"I listened to Pavarotti all the time when I was at conservatory," Ľudovít Ludha, a leading tenor at the Slovak National Theatre, told The Slovak Spectator. "His voice had that perfect balance of emotion and technique. A little piece of everyone who loves opera died with him."

And another tenor rehearsing at the national theatre on September 13, who preferred not to be named, was at such a loss for words, he told The Slovak Spectator he didn't know what to say.

Slovakia and Pavarotti shared a special closeness after he performed at the annual Košice Days celebration in May 1998. By the end of his two-day visit, Pavarotti had clearly developed an affection for both Slovakia and the Košice State Philharmonic.

"I see a beautiful, young country filled with good music," he said at the event's press conference, with then-Mayor Rudolf Schuster at his side.

And despite the fact that tickets to the concert cost more than some people in Košice earned in a month, or the rain that beat down on the town's Festival Square that day, ten thousand fans turned out to hear Pavarotti sing some of his greatest hits, including the Italian folk songs Granada and O sole mio.

"Can you imagine holding an umbrella while trying to clap?" he joked to journalists afterwards.

Since his death, Slovaks from across society have been looking for ways to express their grief.

"The Slovak reaction has been noticeable," Italian Ambassador Antonino Provenzano told The Slovak Spectator. "There's been extensive coverage in the local media, a number of pages have been filled out in the condolence book here at the embassy, and there've been some phone calls from people wishing to honour the incredible artist he was."

On a personal note, I have a favourite memory of Pavarotti from my time in the Metropolitan Opera Children's Chorus in New York that I'd like to share.

I was waiting at the famed opera house's stage entrance one day when Pavarotti came in and sat down next to me. Too shy to say anything to him, I waited for his eyes to meet mine and raised my hand for a tiny, sheepish wave. With a totally straight face, he responded with a similar tiny, sheepish wave.

It was a wonderful example of the generosity and sense of humour he embodied and that brought a love of music into the lives, homes, and hearts of millions of people.