PORTRAITS OF America, real and imagined, is the theme of the new photography exhibit that opened at the American Embassy Art Space in Bratislava on September 11.
The exhibit is part of the embassy's mandate to foster cultural and artistic exchange between Slovakia and the United States. This project focused on how America is viewed from both the inside and outside and how it has changed since September 11. 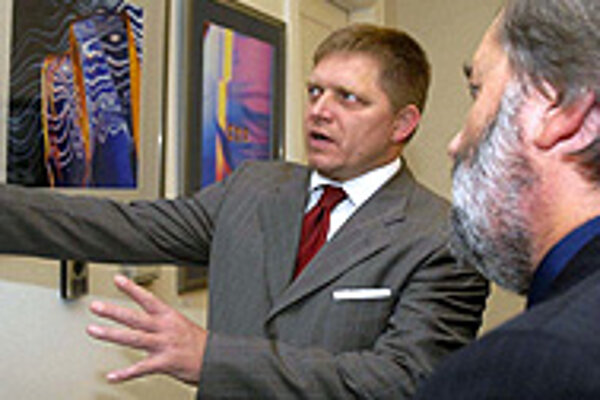 Font size:A-|A+
PORTRAITS OF America, real and imagined, is the theme of the new photography exhibit that opened at the American Embassy Art Space in Bratislava on September 11.

The exhibit is part of the embassy's mandate to foster cultural and artistic exchange between Slovakia and the United States. This project focused on how America is viewed from both the inside and outside and how it has changed since September 11.

The exhibit also served as a reminder of the spirit of partnership that has existed between the two countries over the centuries.

"The United States has been a refuge for the Slovak identity and a place from which we could wage the battle for national freedom," Prime Minister Robert Fico said at the exhibit opening. "From the times of Count Beňovský, who served with George Washington in the American Revolution ... to Slovakia's involvement in the war on terrorism ... there have always been times in our friendship when actions replaced words."

The exhibited works are by three Slovak artists, one of whom has never been to the United States, and an American professor. Their styles range from realistic landscape and documentary photos to imaginative black-and-white and abstract compositions.

"It's all about perspective," Dr. Marián Pauer, the exhibit's curator, told The Slovak Spectator. "Like a match between teams, each of the photographs contrasts the others, yet is fundamentally linked in what it's trying to accomplish."

The artists are Ivan Čaniga, who chose pieces from his series Parallel World; Rick Dingus, a professor of photography, photo history, and drawing at Texas Tech University; Robo Kočan, who showed works from his cycle Shadows of the Spirits; and Martin Kollár, whose documentary photos come from his journey across the southern part of the United States in 2005.

"These images are not only stunning to look at, but raise provocative questions about America," American Ambassador Rodolphe Vallee said. "What kind of society are we in 2007? What are we doing to our environment? What is in our environment that we have not seen until artists bring it to our attention?"

The photos by Rick Dingus were the first for me that touched on the topic of the environment. In Oilfield Trash, Dingus offers a look at a green field in Penwell, Texas that is filled with rusted oil drums and giant white discarded vats. Buffalo Mural, taken in Hale Center, Texas, shows a wall with a painting of Native Americans on it. This struck me as a delicate piece of commentary when put in the context of the different attitudes the Native Americans have toward the environment compared to North America's European settlers. And Crop Duster Mural, taken in Lubbock, Texas, displays the inside of a café that is lit to hallucinatory effect.

"It's like a meeting of the real and imagined within itself," Edward Kemp, the embassy's Public Affairs Officer, said about Crop Duster Mural.

Ivan Čaniga, who has never been to America, also commented on America and its environment in his abstract works.

Grand Canyon is an example of the artist's method of photographing glass objects which have been exposed to different colours of light. In this case, two square shapes are placed next to each other, with orange and green beads on top and between them. To represent Las Vegas, the artist used jagged shapes and discordant blends that, to me, symbolised the city's reputation as an eye-popping conglomeration of entertainment and economics.

Robo Kočan's black-and-white pictures played with light to produce works with elements of the fantastic. Útek z N.Y. (Escape from New York) shows a camel with enormously long legs walking high above the Manhattan skyline. Tanec duchov (Dance of the Spirits) brought the same spookiness to the southwestern United States, with the image of black spirits standing in a circle among canyons in a desert.

The artist's statement accompanying the collection emphasized its paranormal aspect.

"This observes a world not everyone sees," Kočan wrote. "Some of us intuit it and feel it, but many people do not even admit that something like this can exist."

But it was Martin Kollár's photographs that spoke the most to me about America's feelings on insecurity, fear, and patriotism since September 11. Syracuse, NY shows a woman in a garishly coloured diner with a rifle across the table; Bowling Green, N.C. captures a troop of Boy Scouts in the midst of a salute; and Keys, FL speaks volumes with the simple image of shopping carts adrift in a parking lot.

"I think the exhibit's fascinating," Jessica Perry, a Fulbright Scholar who's spending a year teaching in Bratislava, said to The Slovak Spectator. "As a teacher, I can only imagine what you would get if you asked students in New York or New Jersey to create art that reflects their ideas about Bratislava."