No roof over their heads

UP TO 50 Roma people in Nové Zámky have been sleeping in the square in front of the Town Hall in unsanitary conditions. It's their protest against being evicted from their homes for not paying rent. 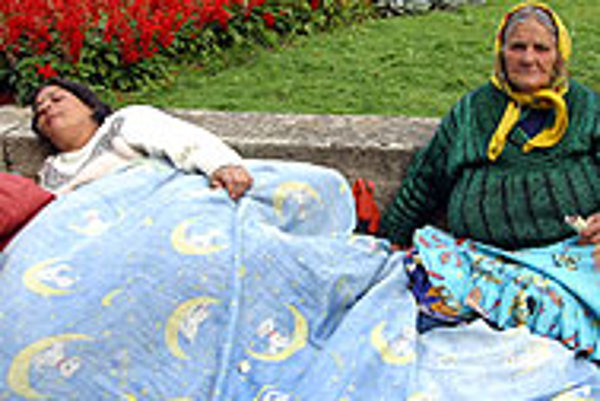 Font size:A-|A+0
UP TO 50 Roma people in Nové Zámky have been sleeping in the square in front of the Town Hall in unsanitary conditions. It's their protest against being evicted from their homes for not paying rent.

The Town of Nové Zámky sold two apartment buildings where the non-payers used to live to the Mediation KMCH company for one crown. The company then evicted the tenants and deported them to nearby villages.

The head of the Town Office, Peter Ágh, said the company was chosen in a tender. It took over the buildings on the condition that it set up substitute accommodation for the buildings' residents.

The debt from the unpaid rent climbed to Sk350 million (€10.3 million), the ČTK newswire reported. More than 200 Roma were evicted.

The Roma considered their new lodgings in neighbouring villages to be inadequate. And the locals did not accept them. On the night of September 13, the Roma relocated to Tekovské Lužany, Šalov and Čaka had their homes or possessions burned.

"I spotted flames before midnight," one of the Roma in Tekovské Lužany told the Sme daily. "I got a hose and started extinguishing the fire.

"We poured the most water on the gas valve, so that it would not explode. Even the power lines caught fire. We were afraid they would fall. The cables bubbled, the windows cracked.

"The firemen fought the fire for about an hour. If they had not come, the neighbouring building would have burned down as well."

He said he didn't want to give his name because he was afraid of the Mafia.

Police have not yet solved the crime.

Even community officials from the villages where the Roma moved didn't hide the fact that they simply did not want the Roma there.

"I told them to get on the bus and go to Levice, then return to Nové Zámky, and the town of Nové Zámky must give them substitute accommodation," Oľga Kolárdiová, mayor of the community of Mýtne Ľudany, told the private TV channel Markíza on September 14.

The Roma, fearing for their lives, refused to return to their burned homes and went back to Nové Zámky, though they had lost the roofs over their heads there. Up to 50 of them gathered in the square on September 14. At press time, that had decreased to one-tenth of the original number. Sleeping in the street was driving them to desperation, they told the media.

"I'm sleeping in the street with a seven-month-old baby, I'm sleeping outside," a woman told the TA3 TV news channel.

"We have nowhere to wash or to bathe, we have no food, nothing," another woman added.

"We have been lying here since September 14, can you imagine?" a third said.

The town administration in Nové Zámky is denying respons-ibility for the situation.

"This is not the task of the Town Office as such, to solve the problem of moving individual town citizens," Ágh told the private TV Markíza.

Anna Botošová, the government proxy for Roma communities, did not hide her feelings of helplessness about the situation.

"The unrest and the rage have taken on monstrous dimensions, and I really do not know how we will solve it," she told Markíza.

As of press time, her office had not responded to requests for comment from The Slovak Spectator.

Klára Orgovánová, the former governmental proxy for Roma communities, told The Slovak Spectator that the situation in Nové Zámky was just one example of how the Roma housing problem has not been solved. Moreover, she said the government of Prime Minister Robert Fico pays almost no attention to Roma issues.

"This is a complex issue, which can take no delay," she said. "The situation in town of Nové Zámky is also the result of one year of inactivity by Deputy Prime Minister Dušan Čaplovič, who is responsible for solving Roma problems."

Orgovánová said the town representatives' actions could be explained to a certain extent by the government's inactivity.

"Many of them are really in a desperate situation, they see no help," she said. "And if they see no help, they try to solve it once or twice. But if they fail the third time, they make a firm step. And these are the methods that towns usually tend to resort to."

Čaplovič, who also holds the ethnic minorities portfolio for the Smer party, pins the blame for the stalemate squarely on the town officials. He claims that in Nové Zámky, some problems with Roma apartment buildings appeared as early as three years ago.

"In spite of this, the mayor and the Town Office did not do a thing about it," he told TA3 on Sept-ember 17.

He also blames the inactivity of the former government, especially Pál Csáky, his predecessor in the position and the current chair of the Hungarian Coalition Party (SMK). Čaplovič said Csáky's actions favoured ethnic Hungarians at the expense of other minorities.

"In the previous term, the problems of the one biggest minorities were solved, but other minorities did not interest former deputy prime minister Csáky very much," he claimed.

Former labour minister Iveta Radičová of the Slovak Democratic and Christian Union (SDKÚ) objected that so far, she has only heard criticism about the previous government's projects from Fico's government officials, but she has not seen any sign of new ideas from them.

"Tensions are enormous, especially in settlements where the concentration of segregated Roma communities in a disadvantaged social position is very high, and they show in various ways - for example, even in the unwillingness to enrol non-Roma children in integrated schools," she told the Sme daily.

Orgovánová does not agree with Čaplovič's opinion, either. She said when she was the proxy, one of the government's priorities was to solve Roma housing problems.

"Čaplovič repeatedly claims things that are not true," she said. "We succeeded in solving provisional substitute housing measures, community programmes, and so on."

She named programmes that started under the previous government of Mikuláš Dzurinda.

"So far, this government has not accepted a single programme in addressing this issue," Orgovánová concluded.

She also said the ministry gave subsidies for Roma housing during her term, but nothing like that is happening now.

"In the last two years, suddenly there is no money for construction," she said. "And the community social workers programme is endangered, too."

Kristína Magdolenová, the chair of the Roma Press Agency non-profit organisation, is convinced that the eviction of the Roma was the result of the fact that they are persecuted in Slovakia.

"The Roma are considered second-class citizens here," she told The Slovak Spectator. This is why nobody defends them even when they are wronged, she said.

Moreover, some companies acquire lucrative property through transactions like the one in Nové Zámky, which are often unjust for the Roma, she said.

"The town sold those apartment buildings for one crown, and the property is located in the centre of Nové Zámky," she said.

Mediation KMCH refused to comment to The Slovak Spectator.

With no sign of the Roma leaving the square, town officials turned to the Office of Labour, Social Affairs and the Family to ask if it would be more appropriate to take the Roma children from their parents in the street and send them to social institutions.

"This is terrible," Orgovánová said in reaction. "In order not to give such a bad impression, with the Roma sleeping outside with their children, they take the children from them and send them to institutions.

"I feel terribly sorry for the people."

She added that the solution of the Roma issue requires enormous patience, a lot of work, and a lot of money.

"These problems will not solve themselves, they have to be treated systematically," she told The Slovak Spectator. "And the government's task is to make instruments for the best, and the least painful solutions."

Meanwhile, on September 16, after the Roma had been camping in the square for several days, the Council of Roma Communities NGO awarded Fico for his contributions to Roma issues.

They said Fico was chosen because he was the first Slovak PM who has ever apologised for the Holocaust of Roma during the Second World War.