AUTHORITIES will soon start issuing travel documents that will not only reduce the chance of passport forgeries, but also bring Slovaks one step closer to European Union standards and visa-free travel to the United States. 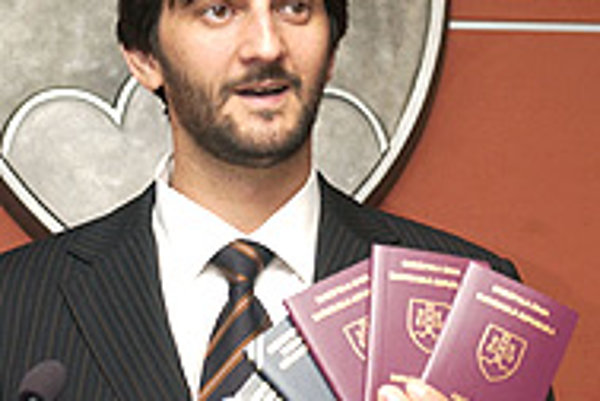 Font size:A-|A+
AUTHORITIES will soon start issuing travel documents that will not only reduce the chance of passport forgeries, but also bring Slovaks one step closer to European Union standards and visa-free travel to the United States.

The Slovak Cabinet passed a bill on travel documents on September 19 that will enable Slovaks to travel with biometric passports as of January 2008. The new passports, which are required by the European Union, will carry a microchip with biometric data on the personal information page.

The biometric features - a digital map of a person's face and fingerprint scan - will radically reduce the risk of passport forgery, the Interior Ministry said.

The most common way of forging a passport is to replace the photo or change the pages, Ľudmila Staňová of the Interior Ministry's press department told The Slovak Spectator.

Slovakia seized 27 forged Slovak passports in 2006, and six in the first eight months of 2007, she added.

Passports issued after January 1, 2008 will already include a digitised facial image. However the fingerprint scan will appear in the passports no later than June 2009.

Slovakia is still waiting for the European Union to specify the technical requirements of the fingerprint scan. Kaliňák said Slovakia is technically ready for the second biometric feature, but without the scanning devices, it would not be effective.

"We cannot store both biometric data simultaneously because the European Union has not yet approved the specifications for compatible scanning devices," he said.

A Brussels working group has been working on the criteria.

Slovak citizens who are issued a passport with only the digitised facial image can later have their passport changed to include both biometric features.

All passports issued prior to 2008 will remain valid until their indicated expiration dates.

The new passports for Slovak citizens will be burgundy and have 34 pages bearing a nine-digit code. The colour of the cover will depend on the class of the passport. Slovakia will issue passports for diplomats, refugees, resident aliens and aliens without citizenship, and also business passports.

Once the parliament approves the bill, people who fail to immediately report the loss of their passports will face fines of up to Sk10,000. People will be allowed to have a maximum of two travel documents, SITA wrote. Children under the age of five will not need passports if their information is recorded in their parents' passport.

The Interior Ministry does not expect any unmanageable pressure on local passport offices because they will not start issuing the new passports during the holiday season, when the demand is highest, Staňová said.

If there is an increased interest in the new passports, the ministry will make additional arrangements to handle the pressure, she said.

Kaliňák said the new passports can be seen as a symbolic entry ticket to the United States, as they increase Slovakia's chances of being included in the US visa-free programme.

"The US Embassy welcomes this development, which brings Slovakia closer to the requirements for Schengen accession, as well as meeting one of the security requirements for participating in the Visa Waiver Programme," Keith Hughes, press attaché at the US Embassy, told The Slovak Spectator.

The US Embassy will continue to work closely with the Slovak government to meet the requirements of the newly-enacted US law, which makes the visa-free programme more flexible while making travel more secure, Hughes said.

Along with biometric passports, Slovaks will also have to keep the so-called visa refusal rate below 10 percent. The country is currently in the 12-percent range.