Breaking down barriers with the power of music

WHAT would it take to bring hundreds of Roma and non-Roma people to a place called the "Roma ghetto" to celebrate together?
Dutch musician Merlijn Twaalfhoven and the Euforion non-governmental organisation answered that question in resounding fashion in Prešov: music. 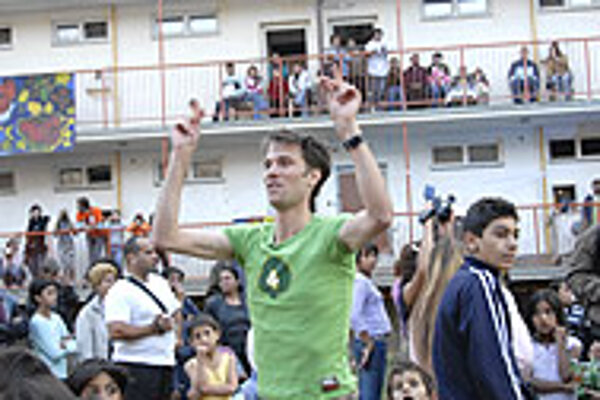 Font size:A-|A+
WHAT would it take to bring hundreds of Roma and non-Roma people to a place called the "Roma ghetto" to celebrate together?

Twaalfhoven and Euforion organised a festival called Stanica Východ (Station East) in the eastern Slovak city from September 10 to 14. The goal was to harness the power of music to break the ice between Roma and non-Roma citizens.

The festival started with music and art workshops for Roma and non-Roma children and culminated in a concert held both in the town centre and the Roma community of Stará Tehelňa.

The idea for the festival was born when Tomáš Lukačka, the head of Euforion, met Twaalfhoven by chance in Bratislava, Lukačka said before the final concert on Prešov's Main Street.

Twaalfhoven drew international praise in 2005 when he organised a project where musicians on both sides of the divided Cyprus performed on rooftops.

"We agreed that it would be very nice to organise something like that in Slovakia," Lukačka said.

They selected Prešov, where the co-existence of Roma and non-Roma people is sometimes tense. Stanica Východ was the first time either of them took part in a project involving the Roma.

The first part of the festival was a five-day art and music workshop for Roma and non-Roma children.

About 120 children came out for the workshops at first, and the organisers selected roughly 60 of them who showed a real interest.

"The beginning of the summer school was quite difficult," Lukačka told The Slovak Spectator. "In fact, it was hugely chaotic because there is a lot of life in these children. They are quite impish.

"But after about two days we found a common line and way to communicate and lead them to creation. The next three days were perfect."

Twaalfhoven agreed that the children were sometimes very hard to control. "I had to change my plans multiple times but I am very proud that in the end this work resulted in a large and very successful event," he told the Spectator.

About half of the children were Roma and half were non-Roma. That also led to some problems at first, Lukačka said.

"In the beginning Roma children did not want to learn Slovak folk songs and vice-versa," he told The Slovak Spectator. "But later they got to know each other and they enjoyed it.

"It was a great experience for them."

All of the children from the workshops got a chance to participate in the final concert. But the five-day summer school was too short to get complete beginners ready for the stage, so only the most talented performed at the final concert.

"This might be an inspiration for the others. For example, those who worked more and were more diligent made it to the big stage," Lukačka said. "Maybe we have helped to raise some positive Roma role models."

The final concert started in downtown Prešov. The artistic folklore ensemble of the local Alexander Duchnovič Theatre performed, immediately making the Roma and non-Roma who gathered in front of the stage dance.

After that, children from the summer school sang and danced, showing their talents and spirit. They were followed by Roma rapper Temeraf, who energised the atmosphere even more.

After more than one hour of the concert, Lukačka gave an uncompromising signal that it was time to move to Stará Tehelňa for the second part of the concert.

Stará Tehelňa is an estate that houses Roma, "rent dodgers" and other socially marginalised groups. It's sometimes also called the "Roma ghetto".

Its four-storey blocks, with 176 apartments in total, were built between 2000 and 2004. Officially, the community has 1,676 residents, but Peter Németh from the local community centre places the actual number at around 2,500. Ninety percent of them are Roma.

Stará Tehelňa hit the headlines in 2005, when the local government planned to build a wall there to separate the problematic area from its "normal" neighbours, who complained of brawls and petty thefts in their gardens. After pressure from international human rights organisations, the wall was not erected. Now two police cameras monitor the area.

The "normal" citizens of Prešov don't set foot anywhere near Stará Tehelňa. But the concert unleashed a flow of performers and onlookers from the Main Street to the housing estate, following colourful paper arrows that the children created at the workshops. It turned into an uncontrollable mass, with Roma rapper Ján Bihári leading the way with a megaphone.

Some passers-by joined the mass. Others were waving and others were just watching.

Probably the most passionate moment of the march was when people sitting on a restaurant patio started spontaneously throwing flowers on the marching children.

Even Stará Tehelňa's enclosed courtyard supports the feeling of a closed community. But on this day, everything was prepared for the concert by the time the crowds arrived. There was a stage in the middle, and balconies full of people were decorated by paintings the children made at the workshops.

Children from the summer school, Dutch-Polish band Radio Robotnik, Svidník's Farsa Duo and other musicians re-opened the concert with a composition by Twaalfhooven. Music sounded from all the corners of the courtyard, with performers standing on the balconies and following orders from Twaalfhooven, who was conducting this peculiar orchestra.

The concert continued with Twaalfhooven playing violin and rapping with Temeraf.

The night was capped off in grand style by IMT Smile, a popular Slovak band led by Prešov native Ivan Tásler. The whole audience was dancing and enjoying the music.

The Slovak Spectator asked Lukačka if the festival met its goals.

"During the IMT Smile performance, the ice was completely melted - if there was any remaining - in the first few seconds," said Lukačka.

For Twaalfhoven the festival and the summer school succeeded partially.

"Many people told me in advance that non-Romas wouldn't enter the ghetto," he told the Specator. "But it nevertheless astonished me that so few non-Roma people attended the show which was so attractive - and free! But many non-Roma children visited the ghetto and have a very positive experience now. This is the most valuable for me; these children might have a better relationship with Roma in the future."

Even though most people in Stará Tehelňa were Roma, the organisers managed to attract some people who would otherwise never have gone there.

"We have come here to hear Tásler," two young mothers with children told the Spectator. "We are here for the first time," they said, closely watching their children playing nearby.

Regardless of their motivation to go there, they saw the community from the inside and admitted that in the end, it was not as bad as they first thought it would be.

It was also the first time for Samuel Burdelák, a tall, blond boy who attended the summer school guitar workshop.

"I liked it," he told the Spectator. "Everything is OK, I like it here. I will come here sometimes to see them."

The Dutch Ambassador to Slovakia, Rob Swartbol, attended the festival and praised it.

"The Station East festival was a unique event, as for the first time a large performance consisting of dancers, musicians, soloists, Roma and non-Roma and international artists took place in the heart of a Roma residential area - Stará Tehelňa," he told The Slovak Spectator.

The embassy supported the project because of its excellent artistic concept and the main message - to destroy barriers among different people through music and change the image of Roma by highlighting their positive qualities, he said.

The Dutch Embassy will try to find ways to continue the concept, one of the last projects supported by its MATRA programme. It is phasing out this year because Slovakia is now a full-fledged member of the European Union.

"Composer Merlijn Twaalfhoven plans to continue the project in an international environment," Swartbol said. "I hope that the festival in Stará Tehelňa will become an annual tradition."

This is also a goal of the Prešov city office. Even though Euforion intended Stanica Východ to be a one-off event, Mayor Pavel Hagyari liked the idea and said he hopes there will be other concerts like it.

"This event has shown that it is not important to distinguish between the ethnic groups," Michal Kaliňák, the town spokesperson, told The Slovak Spectator. The festival showed that Stará Tehelňa, which raises a lot of negative feelings in the minds of non-Roma citizens and causes troubles that mostly result from the weak social situation of its residents, is also about something different, he said.

But one festival alone cannot make a miracle and destroy the downward spiral of suspicion and exclusion.

"Art is a very powerful way to communicate and to unite without prejudice and the loss of your own identity," Swartbol said. "But of course, art alone is not enough. Education in particular will be a key factor in improving the situation for the Roma and closing the gap between Roma and non-Roma."

Teachers from the Matica Slovenská primary school, where the workshops were held, said the project was positive, but they felt the workshops could have accom-plished more if they had been longer.

They saw great potential in the children, but more money and long-term projects are needed so they can live up to their potential. And their parents must also be involved in educational projects, the teachers said.

"They are completely right," she said to the Spectator.

"I'm a likeable, relaxed Roma," Bihári rapped at the concert. He thanked his parents for sending him to university and raising him to be proud of being Roma.

His song was a message that this is one of the ways to improve the situation of the Roma in Slovakia.

For more photos, go to www.slovakspectator.sk.