POLITICAL analysts agree that the border between coalition and opposition parties is clearly set in Slovakia and the re-grouping of these two blocs is improbable. But during the latest parliamentary session, ruling coalition parties twice came ideologically close to opposition parties - during voting on the bill to amend the social insurance act and the bill on honouring Andrej Hlinka. 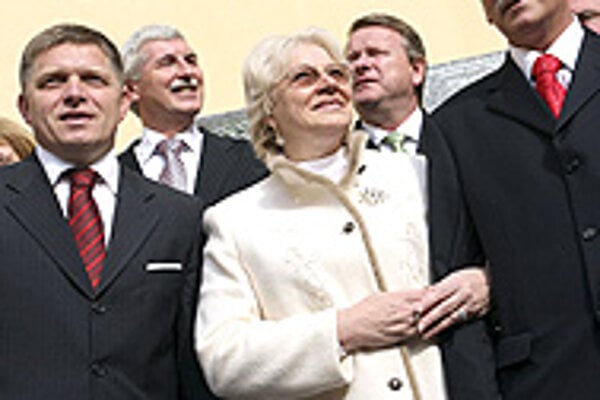 Font size:A-|A+0
POLITICAL analysts agree that the border between coalition and opposition parties is clearly set in Slovakia and the re-grouping of these two blocs is improbable. But during the latest parliamentary session, ruling coalition parties twice came ideologically close to opposition parties - during voting on the bill to amend the social insurance act and the bill on honouring Andrej Hlinka.

During the debate on the social insurance amendment, which would open the capitalisation pillar for six months, Movement for a Democratic Slovakia (HZDS) chair Vladimír Mečiar was against the ruling Smer party's bill until the last moment. HZDS MPs even voted with opposition parties to postpone the amendment at first.

The bill was eventually passed in an amended form with support from Mečiar's HZDS.

On the first day of the debate, September 20, Mečiar proposed to postpone voting on the amendment to the next parliament session.

The Speaker of Parliament, Pavol Paška (Smer), noted that such a procedural proposal must be supported by at least three parties. Thus, Mečiar was joined by two opposition parties: the Slovak Democratic and Christian Union Party (SDKÚ) and the Christian Democratic Movement (KDH).

Mečiar at first refused to make the connection between his proposal and the opposition's support.

"We just submitted it on behalf of the HZDS," he said. "If someone wishes to join, that is none of our business."

But without the support of the other ruling coalition parties, Smer and the Slovak National Party (SNS), Mečiar's proposal was not passed.

On the second day of debate, September 21, parliament was not able to vote on the bill. On Mečiar's orders, HZDS MPs did not register for the vote, which meant parliament was short of the minimum number of MPs required to vote on a bill. Thus, Paška postponed the debate.

Mečiar sharply criticised his coalition partners over the bill, but said the dispute had not caused a crisis in the coalition.

"I think it was very unfair of both partners," Mečiar told the Czech ČTK newswire on September 21.

He also said the coalition parties originally agreed to withdraw and adapt the bill.

He added that the consequences of breaking the coalition agreement are evident:

"Either he must find a solution, or the coalition agreement will come to an end," Zala said.

Milan Urbáni, the HZDS vice-chairman, came to the defense of his boss.

"We have to become aware of the fact that it is not just Smer that rules in Slovakia, it is the coalition," he told Slovak Radio. "Three parties rule, and every one of them has its own agenda, and we also have some principles in our party agenda."

Mečiar succeeded in pushing through some concessions to the bill on September 24. The revised amendment was eventually passed with HZDS support.

According to political analyst Juraj Marušiak, there seems to be a certain tension in the coalition.

"The potential dissolution (of the coalition) is so far very improbable, however, as no one could gain anything from it," he told The Slovak Spectator.

Mečiar has been playing the role of the one who tips the scale, Marušiak continued, and his party and the SNS have been trying to prove their importance to Smer from time to time.

"This is a standard move in ruling coalitions, and in the case of the HZDS, it's also an effort for self-preservation," he said.

Political analyst László Öllős told The Slovak Spectator that the situation in the ruling coalition is no way critical.

He said the HZDS electorate has been stabilised recently thanks to Mečiar's party joining government, and the party is not threatened with extinction.

"Mečiar does not have to fight so much," Öllős said. "Currently, he is creating situations so that he can take a popular position when it comes to cabinet policy."

He added that Mečiar, as a rule, takes a critical stance within the coalition, but he always comes to an agreement with the government in the end.

"In this way, he is signalling to his partners that it would be profitable to make him president, so they should push him aside from this coalition," Öllős said.

However, Mečiar recently said that the best presidential candidate would be Prime Minister Robert Fico. Öllős said such a claim is a tactical move that doesn't show too much pressure.

"He knows exactly that something like Fico running for president is not imminent," Öllős said. "And he also knows exactly that he has a real chance if all the ruling coalition parties stand behind him. Otherwise, he has no chance."

According to opinion polls, Mečiar does not have big chance of being elected president. According a poll by the Polis Slovakia agency taken between September 22 and 24, only 4.1 percent those asked would vote for him. President Ivan Gašparovič had 21.6 percent support, and the SDKÚ MP and former labour minister Iveta Radičová followed with 21.1 percent.

Mečiar has already made two unsuccessful runs for the presidency. He got to the second round both times, losing to Rudolf Schuster in 1999 and Gašparovič in 2004.

Shortly before Mečiar and his HZDS surprised the coalition over the pension bill, Vladimír Palko and his KDH surprised the opposition parties. The KDH prepared a controversial bill about recognising Hlinka, who led the party that went on to lead the fascist Slovak State after his death. The bill was almost identical to one submitted by the SNS.

MPs sent the SNS bill for the second reading.

The fact that the KDH and SNS prepared such similar bills shows that Palko's party has started to shift towards becoming a non-standard, undemocratic political party, analysts said.

He also added that in spite of this, it is not likely that the KDH and the SNS will merge any time soon. Palko openly criticises Slota's offensiveness, and Slota openly attacks Palko for trying to take SNS voters, Öllős said.

"It is quite problematic that Palko's party is gradually shifting towards the position of the SNS, although without its offensiveness," Öllős said. "These positions verge on undemocratic principles."

The bill on Hlinka provoked sharp protests from the Slovak public. A petition against this law was signed by dozens of Slovak personalities. The petition's creators say passing the law would cause a return to state propaganda, and be an insult to the country's spirit of democracy.