SLOVAKIA'S newly-arrived car giants are already facing a problem that has plagued industrial manufacturers across Europe: the lack of qualified labour.
One carmaker has already brought in up to 100 foreign workers from the Balkans, but human resources experts say hiring foreign workers is not the best way to fill the gaps in the Slovak car industry's qualified workforce. 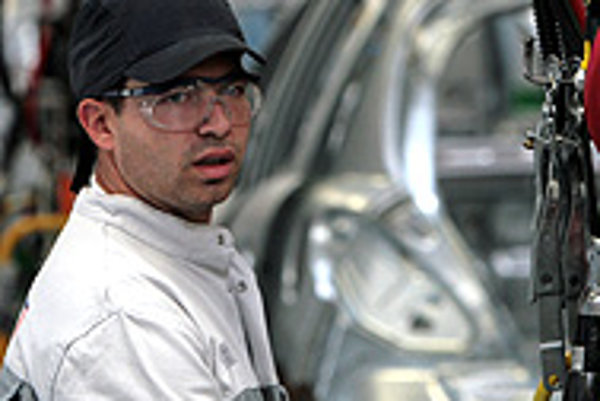 Font size:A-|A+0
SLOVAKIA'S newly-arrived car giants are already facing a problem that has plagued industrial manufacturers across Europe: the lack of qualified labour.

One carmaker has already brought in up to 100 foreign workers from the Balkans, but human resources experts say hiring foreign workers is not the best way to fill the gaps in the Slovak car industry's qualified workforce.

The company has wrapped up its main recruiting process, but with plans to extend production, finding trained labour might cause some headaches.

"Our company has already started sensing the lack of labour, while the Žilina Region's labour market, with its 5.6-percent jobless rate, is almost used up," Kia Motors Slovakia spokesman Dušan Dvořák told The Slovak Spectator. "There is a shortage of qualified labour in the area of production, mainly in the motor assembly we plan on extending."

Hiring Romanian workers was an option for PSA Peugeot Citroen, but Kia, which currently employs 2,500 people, does not see it as a number one solution.

"Kia Motors is a Slovak company, and as such its priority is to employ citizens of Slovakia," Dvořák said. "So far we have focused on Slovak candidates and we do not plan hiring abroad."

PSA Peugeot Citroen is the only car giant that has hired a large number of foreign workers so far. The lack of qualified workers has mainly affected areas like electronic component production, automatisation of production, and cabin painting. The company also lacks job candidates for its production operator positions.

"We hired workers from Romania to work during the summer months when there is a shortage of labour due to the holidays," Peter Švec, director of the PSA Peugeot Citroen communication department, told The Slovak Spectator.

Currently, there are up to 60 foreign workers at PSA Peugeot Citroen, mostly in production, Švec said. The company employed the Romanian citizens through temporary employment agencies, which did the first selection in Romania based on PSA requirements.

PSA Slovakia did the final hiring by testing the labourers' ability to work in the automotive industry. The results were comparable with the results of Slovak employees, according to Švec.

The Romanians work in the assembly hall and welding unit, and they went through the same training process as the Slovak employees.

"The company, however, continues to focus on finding full-time permanent workers from Slovakia who are the most stable and skilled," Švec said. "Only if the Slovak labour market is unable to supply the labour force would we reach for other recruitment options. We would not rule out employing foreigners."

PSA currently employs 3,000 people. It announced its investment in Trnava, in western Slovakia, in 2003 and started production in January 2006. Serial production at the plant began in May 2006.

Volkswagen, the car giant with the longest Slovak history, signed its investment contract in 1991. It has no plans to hire foreign workers yet, but the company is aware of the growing labour problems.

"It will be more difficult to gain a new workforce - especially one with a technical education," Volkswagen spokeswoman Daniela Rutsch told The Slovak Spectator. "That is why we have been building an effective internal training system."

Volkswagen currently employs approximately 8,400 people and is one of the largest employers in Slovakia.

The problem of qualified labour is a complex one and bringing in foreign labour is not the right solution, said Miroslav Poliak, a partner with HR firm Menkyna & Partners. With the growth of the number of automotive employees projected to reach 100,000 around 2010, a few thousand labourers from abroad will not solve the problem, he added.

"If we look at the automotive industry, which employs 65,000 people, and then take a look at the first attempt at bringing in foreign employees reaching a couple hundred people, we can already see that it will not cure the problem," Poliak told The Slovak Spectator.

"These positions we are talking about require the knowledge of Slovak language, which neither Romanians, nor Indians or Pakistanis, nor even Ukrainians speak," he said. "Of course, the only reasonable influx would be from Slavic countries where there is a language familiarity and the employees would be able to learn Slovak. Among other groups, it would be good to address Slovaks living abroad, mainly in countries where the living standard is lower than in Slovakia."

Many countries that could potentially supply labour to Slovakia have also been attracting foreign investors. That means these countries themselves will soon need qualified labour, so they cannot supply it to Slovakia, he said.

After meeting the chair of Volkswagen's board of directors, Andreas Tostmann, in June, Economy Minister Ľubomír Jahnátek agreed that the car industry needs technically-qualified labour, the TASR newswire reported.

"Slovakia devotes a lot of attention to general education, without people gaining the needed qualifications for labour," Jahnátek said.

A solution would be designing a joint project involving car industry companies, the ministries of economy and education, regional governments, trade unions, and employer unions and associations, the officials agreed. Civil and parents' associations should also help young people to select their schools.

If the problem is not addressed soon, it will get worse, and possibly complicate Slovakia's prospects of catching up with the more developed countries of the European Union, the minister said.