In the era immediately following the collapse of communism, the opportunities for Slovaks to study abroad were scarce, because of the lack of money and the lack of information. But even then, Ľuboš Pástor knew he had to get beyond the communist approach to economic studies that still lingered at most Slovak universities. 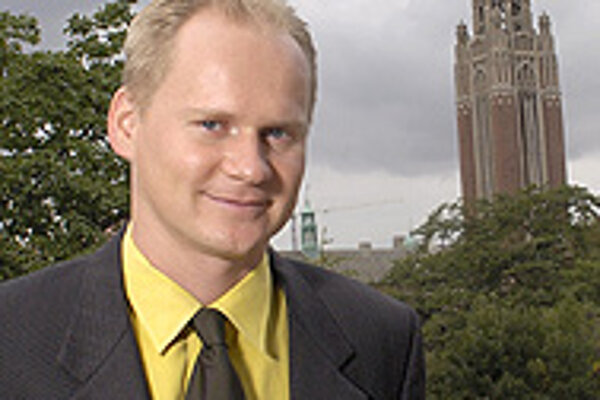 Font size:A-|A+
In the era immediately following the collapse of communism, the opportunities for Slovaks to study abroad were scarce, because of the lack of money and the lack of information. But even then, Ľuboš Pástor knew he had to get beyond the communist approach to economic studies that still lingered at most Slovak universities.

So he took the first opportunity that came his way and boarded a plane westward to North America, heading towards the continent where he hoped to make his dreams come true.

"If it weren't for the 1989 revolution, I might have become a mathematician, but the revolution broadened my perspective," Pástor said.

Now Pástor, 33, is a professor of finance at the University of Chicago, Graduate School of Business (GSB) - one of the leading business schools in the world. He's conducting research in a favourable environment, interacting with top experts in the field of financial economics, and teaching the most talented students.

How does a Slovak student become an internationally-recognised professor? You can tell long stories on this subject, but Pástor puts it quite simply:

"To start, get into a good PhD program. Then it's all about the quality of your research," he said.

Pástor joined the school in 1999. The quality of his research has been recognised by an impressive collection of awards for his work. Recently he received the 2007 Goldman Sachs Asset Management Award from the Western Finance Association for the best research in empirical investments, the Chicago GSB reported in a press release.

Pástor's favourite subjects in high school were mathematics and foreign languages, and he wanted to find a career where he could use them to do something meaningful.

"Economics, which is both quantitative and applied, seemed like a natural choice," Pástor says.

When he started university in the early 1990s, he decided to go to the newly-established Faculty of Management at Comenius University, where about half of the curriculum was taught in English by visiting faculty.

"I didn't want to learn economics from those who had been teaching its communist version for decades," he said. "I got access to international textbooks and met a number of remarkable people - including my wife, Sonia."

In spite of the programme's advantages, he said it was impossible to study economics seriously in Slovakia in 1994. He wasn't satisfied with average knowledge, so he decided to try studying outside Slovakia. He picked the US because he thought that's where he thought the highest-quality research was done, he said.

"When you return home after spending time abroad, it is easier to see what is really important to you at home, and also what could be improved in your home country," he says.

A short study stay abroad can also inspire students to try and get more out of the possibilities the foreign universities offer. This was what happened in Pástor's case. After he completed his studies in Slovakia, he went back to the US to do his MA and later PhD degree in finance at the Wharton School of the University of Pennsylvania - and he never left the American research-friendly universities again.

It's important for young people to invest in their education if they want to achieve success, he said.

"High-quality education is the best investment young people can make."

Chicago GSB ranks consistently among the top 10 business schools in the world, usually as one of the top five. For a researcher in finance, it's one of the best places to work, Pástor said. He added that the foundations of financial economics were laid there.

"We have a great environment for producing new ideas," he said.

The thing he most appreciates about being a professor at the GSB is the ability to interact with his colleagues. University of Chicago faculty and students have received 23 Nobel Prizes for economics since 1969. Pástor says that several of his colleagues at the GSB - such as Gene Fama, Dick Thaler and Lars Hansen - are also on the shortlist.

"It's very inspiring to be in the middle of it all," he said.

Pástor likes to bring recent research into the classroom. His students are mostly MBA students, who already have some work experience and therefore know how things are done in the field. That means they are eager to discuss how things should be done, Pástor explains. And he enjoys challenging his students to think clearly about important issues.

"It is fun to interact with them," he said.

However, he has no significant experience with Slovak students. In fact, he says very few Slovaks do serious academic work in finance, and they are all abroad. The opportunities they have in Western countries are much greater than those in Slovakia, where the environment is simply not favourable for research, Pástor said.

"As far as I know, no Slovak has ever won a Nobel prize, whereas the University of Chicago alone has collected 79 of them," he said.

He added that in some fields, internationally-recognised research has been produced in Slovakia, but that's an exception rather than a rule. In business and economics there are not even exceptions like that, but Pástor doesn't find it surprising.

"It is hard to produce high-quality research if you are on a tight budget, have to spend a lot of time teaching, and if you have to deal with a lot of bureaucracy," he said.

Western researchers, particularly in the US, have better resources for research, lighter teaching loads and higher salaries, he said.

Slovakia has very good high school education by international standards, but Slovak universities are not really competitive internationally, according to Pástor.

"First, Slovakia must think harder about the mission of its university education," Pástor says.

In his opinion, university education currently works under two different models. The first one, widely practised in continental Europe, provides education for the masses for free, with a little bit of research on top of that. The second model, applied by the top US universities, is to create expensive centres of excellence providing world-class research and teaching.

Slovakia is following the first model right now and this is where it will remain if it continues to mimic countries like Austria and Germany, Pástor says.

However, he doesn't think Slovakia must adopt the second model entirely.

Different countries can create centres of excellence in different areas that complement their economies. In Slovakia, for example, it would be useful to create a centre of excellence in car manufacturing. But we don't necessarily need one for studying bananas, Pástor says.

"If a Slovak student wants to study bananas, he or she can do so outside of Slovakia," he explains.

Slovak universities could also introduce tuition fees to help their situation, he said. Tuition fees, with a system of government-provided loans and scholarships for students who need them, would let universities hire better teachers and lead students to take school more seriously, Pástor said.

One year of tuition at Chicago GSB costs about US$45,000 (Sk1.1 million or €32,000) and rises five to seven percent per year. However, according to Pástor, students can always take out loans, and after they graduate from a prestigious universen get well-paid jobs that give them no problems paying off the loan.

With everything he's accomplished with his education, Pástor said he doesn't really have any specific long-term goals right now.

"I set plenty of goals for myself in the past, and it feels great to be goal-free for once," he said. "I enjoy my current work, so I take it one step at a time and try to do my best."