'The world has changed'

KAREN Hughes, the US under secretary of state for public diplomacy and public affairs, and long-time advisor to US President George W. Bush, made an official visit to Slovakia last week to talk to Slovaks about her country. 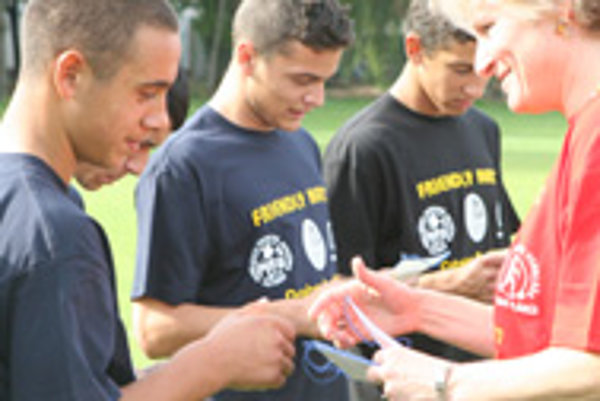 Font size:A-|A+0
KAREN Hughes, the US under secretary of state for public diplomacy and public affairs, and long-time advisor to US President George W. Bush, made an official visit to Slovakia last week to talk to Slovaks about her country.

She spoke to The Slovak Spectator about how the world perceives the United States, as well as the importance of diversity and a free media in countries like Slovakia.

The Slovak Spectator (TSS): One of your main jobs over your years at the White House, first as counsellor to President George W. Bush and later as undersecretary of state for public diplomacy, has been to interpret the White House to the rest of the world. How has the world's perception of the US changed since Bush took office in 2000?

Karen Hughes (KH): First of all, the world has changed, and that has made a big difference. The countries that joined the European Union (in 2004 and 2007), for example, look at themselves a little differently now that they are members of a union that we support and encourage. We welcome a strong EU. A strong EU means a strong partner for America in addressing challenges across the world. For the new members, this means a new image of themselves.

America has had to make some very hard decisions in the aftermath of September 11, and these haven't always been popular decisions, even though our president and administration made them in what we thought was not only the best interests of America but also of the broader world.

TSS: You were a member in 2002 of the White House Iraq Group, whose job was to convince the US public of the dangers posed by Iraq. . .

KH: It was claimed on Wikipedia that I was, but I had already left the White House by that time. I sat in on a meeting or two, but I was not a member. I get asked about it everywhere, but it's not right.

TSS: Still, the information the Bush administration used to justify the Iraq invasion later proved to be partly incorrect. How much of a problem has this caused in your relations with the rest of the world?

KH: I actually don't get asked about that very much. The issue that I get asked about around the world is the Israeli-Palestinian issue. One of the main things we can do to improve the overall perception of America and the prospects of peace in the world is to bring about an Israel and Palestine living side by side in peace and freedom.

But as you know, the intelligence we were using was not just from Unites States intelligence agencies, but was shared by virtually every intelligence agency in the world, and both Republicans and Democrats believed in it, so it was not a matter of partisanship. Most of the major levers of our country believed it was accurate intelligence. We also had a previous experience in 1991 when Saddam Hussein was actually further along in developing his weapons than the intelligence had shown us. Intelligence is by its nature an educated analysis, but it's not perfect.

TSS: Britain has a new leader in Gordon Brown, France in Nicolas Sarkozy and Germany in Angela Merkel. Do you expect your relations with these three countries to change?

KH: That's interesting. Newsweek recently declared "the end of anti-Americanism" on their cover page. I wish that were the case, but it might be a little optimistic, because I haven't seen that in the public at large. But when you talk about people's image of America, it's a complex tapestry woven by many different artists, from our corporate presence through McDonald's. Coca Cola and Wal-Mart, to our policies, to people's personal experiences, to maybe a movie you saw or a pop song you heard that maybe your kids liked but you didn't, and to the process of getting visas, which can be difficult sometimes even though we want to be a welcome country, and we're working hard here for Slovakia to become a member of the visa waiver programme. It's a very complex picture, and I find as I travel the world is that even though people may not agree with certain things that America has done, by and large much of the world still has an affection for the values and ideas that America stands for, like equality for all no matter what their background or race, to freedom of worship and the media.

TSS: You chose to come today to a football match involving Roma players. Why this among all other possible public appearances?

KH: To encourage respect for diversity, and to discourage the notion that differences foster divisions rather than being something that enriches us. My country was founded on the conviction that all people are created equal, yet for years we didn't live up to that. For years, women couldn't vote and didn't have the same opportunities as men, and African-Americans were certainly treated [unfairly]. Now my boss, the secretary of state [Condoleezza Rice], is both an African-American and a woman.

TSS: You worked as a television reporter from 1975 to 1980, and later as director of communications for George W. Bush, so you have seen things from both sides of the fence. What advice would you have for Slovakia's prime minister, who feels he is being unfairly treated by the media?

KH: That's a good question. I do come from a media background, and I believe that most journalists by and large try to be fair. I also know that most of us in politics get up every morning and read the headlines and tend to grumble about what we find there. But a free press is absolutely vital to a free society, and your role is enormously important in the representation of free thought and free expression. As they say, journalism exists to comfort the afflicted and afflict the comfortable. Being afflicted by a free press is a frequent source of consternation to those in power.