SLOVAKIA'S young people have not been spared from the country's unemployment woes: they have the second-highest youth unemployment rate in the OECD economic club. 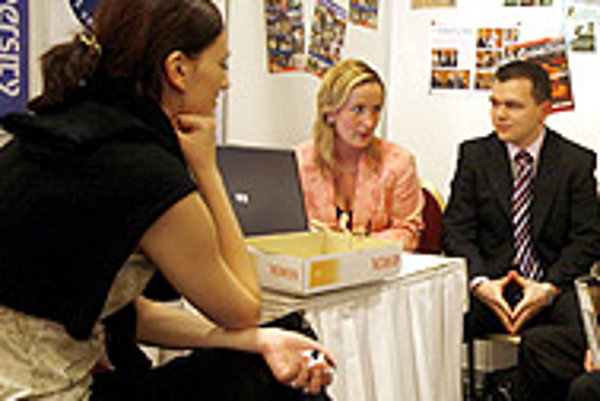 Font size:A-|A+
SLOVAKIA'S young people have not been spared from the country's unemployment woes: they have the second-highest youth unemployment rate in the OECD economic club.

The 15-to-18 and 19-to-24 age groups are among the most vulnerable on the labour market, because they have no experience to offer and not much motivation, in general, to work for slightly more money than they would get from social benefits, human resources experts say.

Last year's unemployment rate for young people was 27 percent - well down from the record level of 37 percent, reached in 2001. But there are still many obstacles for young people who are trying to find employment, according to a report that the OECD (Organisation for Economic Cooperation and Development) released in late June.

Almost 60 percent of Slovaks between 15 and 24 years old have been looking for work for more than one year, while the average among OECD countries is 21 percent. Similarly, only 26 percent of young people were employed last year, while the OECD average stood at 42 percent.

"People aged between 15 and 18 usually have no experience," said Gerard Koolen, managing partner of the Lugera & Makler personnel company. "But 95 percent of the vacancies that we are trying to fill for our customers require candidates with certain skills and work experience."

To help them gain skills, companies could offer extensive training for young students and job seekers, and schools could actively approach the companies, Koolen told The Slovak Spectator.

However, there are plenty of job opportunities for the age group between 19 and 24, he said.

"It might well be that the job offers do not match the job requirements of this group of people," he added.

Not all of the young people who register with the labour offices as unemployed are completely out of work - many young people prefer taking seasonal jobs abroad and earning more in a couple of months there than they would in a year with a regular job in Slovakia.

A lot of young people are registered with the labour offices even when they are working abroad, according to Ľuboš Sirota, director general of the Trenkwalder personnel company.

"Young people in this age group are still trying to get experiences and a long-term job is not a real life priority at that point," Sirota told The Slovak Spectator.

Slovakia's jobless rate has been gradually sinking over the past couple years. But each September, the job offices expect a moderate unemployment increase due to the arrival of new graduates on the labour market.

The registered jobless rate in Slovakia reached 8.19 percent at the end of August, which was a drop of 0.11 percentage points from late July. Compared with August 2006, the jobless rate was 1.66 points lower, according to the National Labour, Social Affairs and Family Office. The number of job seekers able to take a job immediately was 212,905 at the end of August.

However, a survey by Eurostat, the European Union's statistical office, shows that the seasonally-adjusted unemployment rate in Slovakia remained unchanged in August from July, at 11.1 percent. Slovakia had the highest jobless rate in the EU, the SITA newswire wrote.

Education professionals and human resources experts blame inadequacies in the education system for the high number of jobless graduates, as well as the lack of qualified labour to meet the market's needs.

"[The education system] has its qualities, but it has not been geared towards the practical needs of the market, its structure and trends, and the direction of the economy," Miroslav Poliak, a partner of the Mekyna & Partners personnel company, told The Slovak Spectator. "It also lacks flexibility."

Graduates are not prepared enough for the actual demands of potential employers, Poliak said.

"Students might have a general education, but only minimal professional specialisation in particular areas and perhaps no practical experience at all," he said. "They often do not have access to modern technology, or they are not being trained by effective and competent teachers."

After hiring a recent graduate, most companies still have to invest substantial funds into training their new employee, which is why employers always look for people with at least some experience, Poliak said.

While young people seem to be mobile because they do not have their own families and commitments, potential problems with housing repel them from moving to regions that might have plenty of jobs to offer, human resources experts say.

"If they finally find something, the price of rent sometimes takes up more than half of their starting salaries," Poliak told The Slovak Spectator.

Employers that set up housing for their workers are scarce, so young people often stay home as long as their social benefits exceed what they would take home from their salaries after paying the bills, he said.

"They have no motivation to move away from their families and work all day," Poliak said.