COMPANIES, job seekers and HR agencies are increasingly turning to the internet to help with the job recruitment process.
The web has made job searching and recruiting faster and more effective. Print media and labour offices cannot compete with job websites in collecting and providing information on vacancies and CVs of prospective candidates.
site for the Slovak market, topjobs.sk. 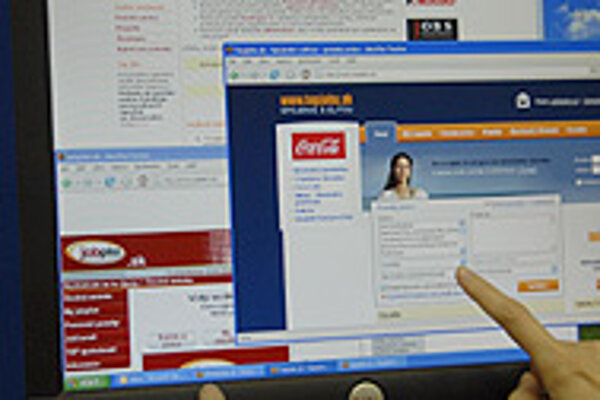 Font size:A-|A+
COMPANIES, job seekers and HR agencies are increasingly turning to the internet to help with the job recruitment process.

The web has made job searching and recruiting faster and more effective. Print media and labour offices cannot compete with job websites in collecting and providing information on vacancies and CVs of prospective candidates.

"The internet is currently second most effective source of job seeking and recruiting," said Libor Malý, director of LMC. The company runs Jobs.cz, which operates in the Czech Republic, and it recently launched a similar site for the Slovak market, topjobs.sk.

"Personal recommendation remains the first and most unbeatable source of recruitment," he added. "Its advantages are hardly about to be overrun by technology."

Online recruitment has become the only advertising field where the internet has beaten print media, said Dalibor Jakuš, executive director of Profesia, which runs the Profesia.sk job website.

None of these ways provided a detailed overview of the labour market situation, he added, but job websites have managed to do this.

The internet has made information on job vacancies available to more job seekers, which has raised competition among them. It has also made it easier for small companies to find better candidates.

"At the end of the day, it is a win-win situation for all the parties - companies get better employees and the job seekers have more opportunities to choose from," Jakuš said

The internet is not merely an electronic bulletin board where the job vacancies are displayed, Malý said.

"Today, the internet provides complex assistance to firms throughout the whole recruitment process - from the moment when the need to fill a vacancy occurs to the end of a successfully-completed trial period of a new employee," he said. "The internet currently manages all of this, and the whole labour market gets faster and more effective."

In the past, online recruitment was more or less a privilege for IT specialists, who were almost the only people using the internet regularly. Now the number of people searching for jobs on the internet is growing substantially.

According to a recent survez, people from 18 to 55 years of age from larger cities use Profesia.sk most often. Most of them have secondary and university education. Women use Profesia.sk for their job searches more often than men. Online recruitment and job searching is used more often in the Bratislava Region than in central and eastern Slovakia.

More companies are also turning to the internet to recruit for a greater variety of positions.

"Firms use the internet for recruiting almost all of their job positions, from cleaning to top management," Jakuš said.

The people who use Jobs.cz to find employment are active and hard-working, able to work with computers, and very often speak a foreign language, said Malý. Most of them are young, but the occasional 50-year-old manager also uses the site.

"A company that does not use the internet for recruiting cannot compete with those that use the internet, in terms of the effectiveness and the quality of the recruitment," Malý of LMC told The Slovak Spectator. "Today it is possible to find the best actual candidates only by using the internet."

The most frequently searched positions on Jobs.cz include IT specialists, technicians, accountants, financial managers and logistics specialists, he said.

The internet has already become an established form of recruitment and job searching, Malý said.

With growing internet penetration in Slovakia, the internet will soon be available to almost everyone with a mobile phone. It is also available 24 hours a day, it can be regularly updated and modified, and it can store large amounts of information.

"If all the job offers currently published on Profesia.sk were printed in the maximum possible density, the result would be a book the size of A4 paper about 500 pages long," Jakuš told The Slovak Spectator.

Even though Slovakia still lags behind Western European countries in internet penetration by 10 to 20 percent, the proportion of Slovaks using the internet for job searching is significantly higher than in neighbouring countries, Jakuš said.

Malý said the Czech Republic and Slovakia are already using some services on job websites that online recruitment specialists in western countries have not even launched. He believes that the services still have more room for greater sophistication.

Job website administrators say the sites will soon be used not just for one-off recruiting, but to help build careers.

"The internet must become an aid in building an optimal, life-long career," Malý said. "And this is no fantasy - this is already a doable task."

Human resources companies first saw job websites as competition, but they have gradually changed their minds. They realized very early that they can use the websites as an effective source of job seekers for their clients, the site managers said.

The internet is an opportunity for HR companies to innovate their business models and better respond to the changing needs of the market, Jakuš told The Slovak Spectator.

"Currently, no standard HR company can function without the internet and many of them have created their own sophisticated internet solutions," he said.

"Instead of the negative impact that was expected on the HR company market, the internet contributed to their growth.

"It made their activities more effective and faster. The competition of job websites forced them to offer higher quality services."

"The whole business is about your state of mind - you either see the things as a problem or as a challenge," Malý said. "Those who see the problems will fail sooner or later and will make room for those who can see the opportunities.

"It is the same with the labour market. Our mission is to help companies and people to be better, to have better employees and better jobs, to meet their challenges and to bring an added value to the world."