A WALK through the centre of Bratislava these days can feel like a crash course in marketing. Inevitably, someone shoves a flyer for language courses at you, blocks your path and asks for "just a minute of your time", or whips out knock-off watches and perfumes for sale. 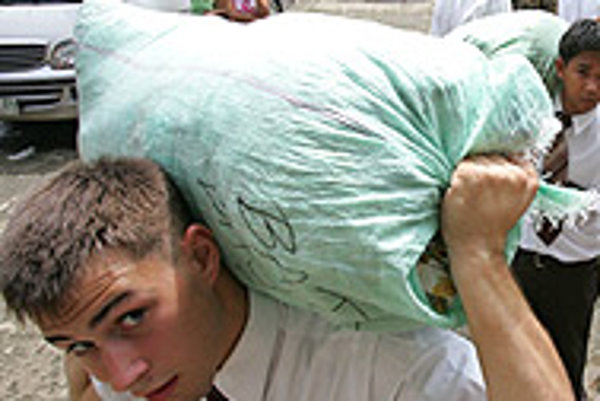 Font size:A-|A+
A WALK through the centre of Bratislava these days can feel like a crash course in marketing. Inevitably, someone shoves a flyer for language courses at you, blocks your path and asks for "just a minute of your time", or whips out knock-off watches and perfumes for sale.

But then there are the mild-mannered young men in freshly-pressed suits who speak of religion in fluent, if accented, Slovak and wear name tags that always begin with "Elder". They're missionaries from the Church of Jesus Christ of Latter-day Saints (LDS), commonly known as the Mormons.

Mormon missionaries were particularly visible throughout Slovakia's largest cities last September, when the church launched an effort to get the religion officially recognised by the government. The law at the time required 20,000 signatures from the general public, so the missionaries canvassed streets for days, carrying the Book of Mormon in one hand and a petition in the other.

But Slovakia's deep-rooted Catholic traditions, and at times even the Catholic Church itself, have presented some challenges.

The LDS was established in Fayette, New York on April 6, 1830 by Joseph Smith, who Mormons believe translated the Book of Mormon from "reformed Egyptian" written on gold plates delivered to him by the Angel Moroni. The translation was accomplished with divine assistance and represents the modern gospel of Jesus Christ.

"We are a Christian church," Marvin Slováček, Jr., the president of the Czech Prague Mission, which oversees the church's activities in Slovakia, told The Slovak Spectator. "We may study Joseph Smith, but we believe in Jesus Christ."

After Christ's crucifixion and the death of his apostles, the LDS believes there was an apostasy - a "falling away" from the true teachings of His word - that lasted until Christ restored his church through Joseph Smith.

And as well as believing Christ appeared to followers who had migrated from the Holy Land to the New World, the LDS teaches that prophets exist on Earth today, such as Church President Gordon B. Hinckley.

"I grew up Catholic, but whenever I read the Old and New Testaments, I always wished I could have lived during the times of the prophets, to be closer to them," Monika Baťková, who converted three years ago and serves as the church's spokesperson in Slovakia, told The Slovak Spectator. "And then I started to ask myself, 'Why do we think God isn't talking to us now?' and 'Where are the prophets now?'"

The basis for Mormon beliefs is The Articles of Faith, 13 tenets written by Joseph Smith.

"Among them is allowing everyone the privilege of worshipping how, where, or what they may," Slováček said.

Mormonism actually has a long history in this region. The first missionaries arrived in Prague in 1884, but significant missionary work didn't begin until about 45 years later, when Elder John A. Widtsoe dedicated Czechoslovakia for the preaching of the gospel, according to materials provided by the LDS.

Mormons in Czechoslovakia were persecuted by the Nazis during the Second World War. In fact, the arrest of four Mormon missionaries eventually led to all missionaries being expelled from the country.

The end of the war presented a glimmer of hope. In 1946, three Mormon missionaries re-entered Czechoslovakia and resumed their work, but were again expelled once the Communists took power. By 1950, all public church activity was declared illegal, leaving Czechoslovak Mormons without support for more than 40 years.

"During Communism ... priesthood leaders often visited members one by one or in small groups to administer the sacrament, comfort and teach," the LDS Church News Archives states in an issue provided to The Slovak Spectator by Kahlile B. Mehr, author of Enduring Believers, Czechoslovakia, and the Latter-day Saints, 1884-1990. "Church materials that found their way into the country were typed on old typewriters with nine carbon copies at a time and then passed to members in different locations."

Then in 1990, following the Velvet Revolution, the LDS was granted recognition by the newly-elected democratic government. At that point, the church had 345 members and was growing at the rate of about 200 new members a year.

But when the Czech Republic and Slovakia split in 1993, the LDS was left without official recognition in Slovakia.

The LDS operated for years in Slovakia without official recognition by the government. This was due in part to the Church Registration Act, passed in 1991, which required minority religions seeking recognition to present a petition signed by 20,000 Slovaks in support of the new religion.

"In theory ... the law encouraged religious freedom, but made it impractical to attempt," Shaun D. Stahle wrote for the LDS Church News. "Church leaders concluded it was impractical to meet the demands of such stringent laws and felt it best to wait until the law was changed."

But in September 2006, with the law still in place, the church gathered all the missionaries it could muster and sent them around Slovakia's major cities to collect signatures.

While the petition drive was under way, Catholic bishops issued a statement urging believers not to sign it, saying Mormonism was "not in line with the doctrine of the Catholic Church".

The statement earned Archbishop Ján Sokol, the head of the Bratislava-Trnava diocese, a visit from American Ambassador Rodolphe Vallee.

"The LDS co-operated with the Catholic Church on several kinds of events and services, and still does," Slováček told The Slovak Spectator. "But everyone has the right to say what they believe."

The LDS gave itself a month to gather the signatures, and was delighted to find missionaries were collecting thousands each day.

"It took a little more than a week," said Baťková, who worked on the petition drive with her husband Viliam Baťka, who serves as the LDS's Public Relations Director. "It was really amazing."

In all, the missionaries gathered 33,000 signatures, which were immediately presented to the Slovak government for verification. The LDS was officially granted recognition on October 18, 2006.

Official recognition allows the LDS to build and operate religious buildings, as well as perform legally binding ceremonies, such as weddings.

"It also allows us to accept financial support from the Slovak state," Baťka said, "but we don't. That's not why we did it."

The LDS Church now has 5 branches and more than 100 members in Slovakia.

"We feel our relationship with the Slovak government is good and that we are accepted and free," Slováček said.

Nonetheless, earlier this year, the Church registration Act was tightened even further. Now, instead of 20,000 signatures from the general public, the signatories must be permanent residents of Slovakia who are adherents of the religion and understand its principles.

"But the law's not retroactive," Slováček said.

According to Slováček, the LDS has 20 missionaries in Slovakia, most of whom are from North America. Mission applications are voluntary and the missionary does not choose where they will go. Once they arrive, they're put into a Mission Training Centre, where they learn the local language intensively for two months, he said.

"They learn mainly vocabulary from the area of religion, and many of them are really very good," Baťková said.

"They volunteer to spend time away from home and cover all the expenses themselves," Slováček said. "They do it from their heart because it's about conviction. It's really a labour of love."

The LDS is also co-operating with other religions and churches to provide humanitarian and social services to the needy.

"Two of our missionaries did nothing but social work while in Bratislava," Slováček said.

The LDS is also in the process of setting up Mormon Helping Hands, a program designed to provide community service and disaster relief to local communities. In Slovakia, the plan is to use it to improve the environment.

"It's our way of giving back to the people who were good to us, and gave us their trust," Baťka said.