BRATISLAVA has finally held its own photo marathon. After Prague, Vienna, and Berlin, the Zaostri (Focus On) civic association organised the first year of this popular competition for photo enthusiasts in the Slovak capital on September 22. 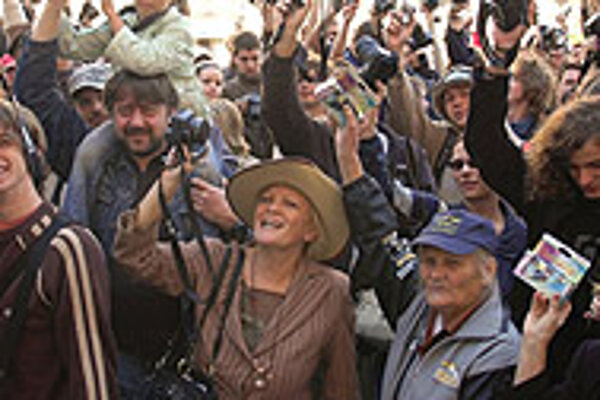 Font size:A-|A+
BRATISLAVA has finally held its own photo marathon. After Prague, Vienna, and Berlin, the Zaostri (Focus On) civic association organised the first year of this popular competition for photo enthusiasts in the Slovak capital on September 22.

The event gives photographers a set number of hours to take pictures on certain topics in a given order.

As many as 393 photographers registered in Bratislava, 363 of whom completed it successfully.

Photographers from other Slovak towns joined the event and the participation of Germans, Austrians, Englishmen, Czechs and even Spaniards gave it an international character.

The photographers had six hours to bring back photos on 12 topics: Saturday; We, People; Versus; and Free Places. The organisers also borrowed a slogan from an ad for a popular soft drink in Slovakia, Kofola: If you love her, there's nothing left to consider.

Other topics were not as easy to interpret - Old Walls, Old Stories; I Will Show You Something; I Like to Be Here; Structure; Sweat; Slow Down; and Restart.

"The other hundred or so used analogs," Károly told the Spectator.

This included the 36 disposable cameras given out to the participants who arrived empty-handed.

Prominent Slovak documentary photographer Pavol Breier, a member of the jury, was pleasantly surprised that despite the limited time, many of the photographers had thought over the list of topics and made a compact series of images.

"They really created series that had a concept and were homogenous," Breier told The Slovak Spectator.

"The photographers who used analog cameras had only one picture to spare for each topic and a list they had to follow, so they thought carefully before taking each image," Breier said.

Those with digital cameras took more pictures and just deleted what they didn't want, which "disrupted the series in the end", he said.

"But the quality of the winning series is comparabale, whether taken by a digital or analog camera," he continued.

In Károly's opinion, the photo marathon had a successful debut. As well as a lot of participants, there were positive responses to it posted on its website.

The high attendance also tested the ability of the organisers to collect the digital pictures within a relatively short period of time.

"But there were no major complications," Károly said.

Zaostri plans to organise the photo marathon again and turn it into a tradition.

"We are already planning for next year," Károly said.

The 10 best series from the photo marathon will be on display at the Klarisky Church from October 7-22. Zaostri also plans to put photos on the event's website, www.fotomaraton.sk.

Photo marathons springing up across the country

The spa town of Piešťany was the first Slovak town to host this popular event on September 1. A total of 51 photographers enrolled, of which 31 captured images on topics such as Bridge - the Place for People, Water that Keeps me Afloat, Park, Mirroring, Not only the Sky is Blue, and others.

"The response from the photographers during the competition, as well as comments on the website, were very positive," director Martin Valo told The Slovak Spectator. "They liked the chosen topics."

Unlike Bratislava, Piešťany had a category for children aged between 10 and 14 called Young Photographer.

From this category, "the photos by Jakub Kovacz are particularly nice", Valo said, adding the photo marathon would certainly return next year.

The next photo marathon takes place in Banská Bystrica on October 6.