THERE has been a growing extremist presence at football matches involving Slovak clubs this year, showing links with the neo-Nazi movement.
So far, Slovak police have made some arrests surrounding the matches, but no one has been charged for inciting the actions. 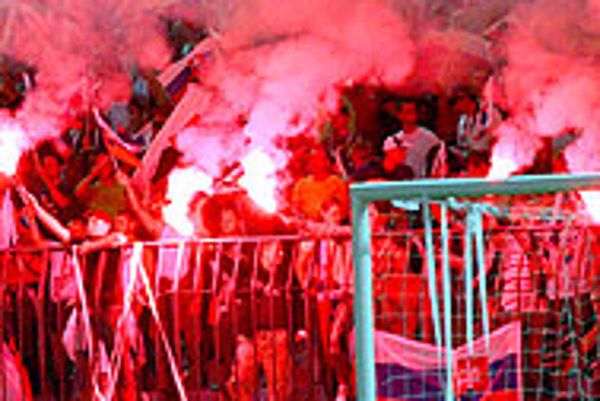 Font size:A-|A+0
THERE has been a growing extremist presence at football matches involving Slovak clubs this year, showing links with the neo-Nazi movement.

So far, Slovak police have made some arrests surrounding the matches, but no one has been charged for inciting the actions.

April 20, Senec: Fans of the ŠK Slovan Bratislava football club commemorated the birthday of Adolf Hitler during a football match in Senec. According to the People Against Racism non-government organisation, Slovan fans at the match displayed a huge banner that bore Hitler's image and the words "Alles gute, Adi" - which roughly translates as "Happy birthday, Adi (Adolf)." They started chanting "Racist, Fascist, Hooligans," and later raised their right hands in a Nazi salute. Towards the end of this routine, they destroyed the banner.

Police have halted their investigation in this case, the regional spokesperson of the Bratislava Regional Police, Alena Toševová, told The Slovak Spectator.

July 7, Vienna: Even before the football match in Vienna, the second round of the UEFA Intertoto Cup between Slovan Bratislava and Rapid Vienna, Slovan fans blocked traffic and destroyed cars.

Some radical hooligans harassed passers-by in the Hütteldorf district prior to the match, as photos on the Ultrasslovan.sk fan website show.

At the stadium, Slovan fans tried to tear down the fencing to get to the Rapid fan section. They managed to destroy the fencing, but police rushed into the stands and pushed the Slovaks out. Later, Slovak hooligans set fires in the bleachers, which had to be extinguished by security forces with water hoses.

"I have never seen anything like that," UEFA delegate Teuve Halopainen told the public Slovak Television channel after the match.

Slovak police did not investigate this case.

"The match was played in Vienna, it is being investigated by the Austrian police," police deputy spokesperson Andrea Polačiková told The Slovak Spectator.

September 23, Bratislava: The centre of Bratislava was flooded by football fans from the town of Trnava, who marched behind a flag strikingly reminiscent of the flag of Nazi Germany. Instead of a swastika, it had the Spartak Trnava club logo, and instead of the Reich's cross, it had a clenched fist.

On the way from the railway station to the Artmedia stadium in the district of Petržalka, Trnava fans were accompanied by dozens of policemen with anti-riot equipment.

However, police showed no interest in the flag, the Sme daily wrote.

September 29, Trnava: Four state police officers and four railway security officers were injured in a clash between fans of Spartak Trnava and Slovan Bratislava, both during their match in Trnava and in the riots that followed. According to the TASR newswire, paramedics treated about 50 fans at the site.

Ten people were detained - three men for not being able to prove their identity, three for suspected breach of peace, and four for rioting, damaging property and spreading extremism.

This case has not been solved either.

"Trnava police officers, in cooperation with Bratislava Police, are gradually questioning the suspects - it is necessary to interrogate more people," Trnava Regional Police spokesperson Martina Kredatusová told The Slovak Spectator. "In Trnava, about eight officers are working on the case."

October 6, Trenčín: Slovan Bratislava fans clad in jackets with the word "Steinar" - a brand worn by neo-Nazis, according to People Against Racism - invaded the Trenčín fans' area during the match, stole their banner and beat them.