Barrier-free booths cause the biggest headaches

BARRIER-free public phone booths are often not actually barrier-free, not placed on premises that are always accessible to the public, or not marked properly.
The market regulator, the Telecommunications Office, con-ducted an inspection of selected public phone booths which their operator, Slovak Telekom, declared as barrier-free. 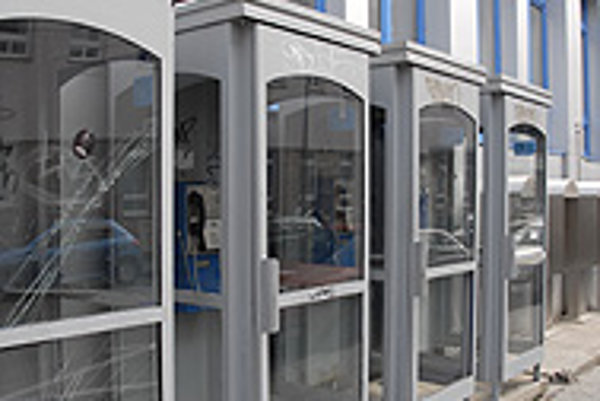 Font size:A-|A+
BARRIER-free public phone booths are often not actually barrier-free, not placed on premises that are always accessible to the public, or not marked properly.

The market regulator, the Telecommunications Office, con-ducted an inspection of selected public phone booths which their operator, Slovak Telekom, declared as barrier-free. The office checked 975 payphones from May 5 to July 2 - about 55 percent of all the phone booths that had been declared barrier-free.

The market regulator requires the situation to be fixed by the end of this month.

The office also said Slovak Telekom did not fulfil the obligation to make at least 25 percent of its phone booths barrier-free in locations where the public has constant access. This was based on statistics that Slovak Telekom submitted before the inspection.

"In January 2007, Slovak Telekom reported 7,880 phone booths in all of Slovakia as placed at premises constantly accessible to the public," the Telecommunications Office report reads. "Out of these, 1,779 were declared as barrier-free, which is only 22.58 percent."

Slovak Telekom is required to operate the public payphones as the provider of universal telecommunications services. In 2005, when the regulator was deciding who would handle the services, Slovak Telekom was the only telecom operator interested in providing universal service to the full extent.

Jana Burdová, Slovak Telekom spokeswoman, said the most frequently cited shortcoming - the inability to make certain types of phone calls - should be reported in a different way. They should be evaluated as part of the qualitative parameters of the universal service, she said.

A report on this statistic is submitted every six months, and each quarter is reported separately.

During the Telecomm-unications Office investigation, the main reasons why it was impossible to make the phone calls in question were: missing or stuck number keys, missing receivers, and phones that did not read cards, take coins, or were otherwise out of order, according to Slovak Telecom.

"These findings prove that these are common problems that are addressed under the universal service qualitative parameters," said Burdová.

In the second quarter of this year, Slovak Telekom fulfilled the qualitative parameter and reached 97.09 percent.

"The target is 92 percent, which means ST outstripped the parameter," Burdová said.

However, Slovak Telekom plans to remove the shortcomings, such as missing instructions for using the phones or missing information on emergency numbers, by the deadline set by the Telecommunications Office, Burdová said. It is also working on providing barrier-free public payphones that are spread evenly all over Slovakia.