FIXED phone lines, mobile phones, broadband internet and digital television - borders between these areas of business are disappearing. Telecommunications companies in Slovakia used to compete in only one or two fields of the business, but now they are becoming rivals in a growing number of areas. 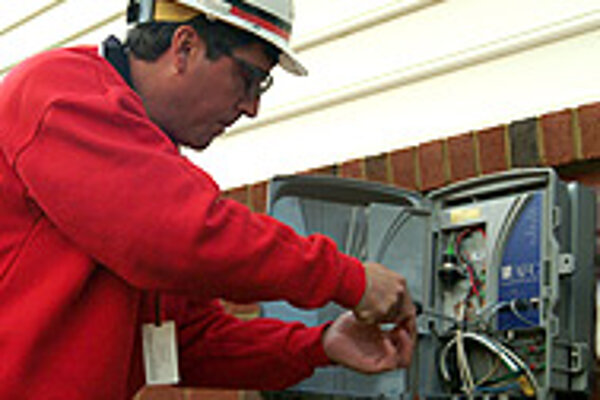 Font size:A-|A+
FIXED phone lines, mobile phones, broadband internet and digital television - borders between these areas of business are disappearing. Telecommunications companies in Slovakia used to compete in only one or two fields of the business, but now they are becoming rivals in a growing number of areas.

Telecom firms in Slovakia are following a global trend by vigorously investing into new areas of business so they can provide products based on the so-called triple play business model - voice services, internet and TV. However, the services are still only accessible to a limited number of customers.

The largest mobile phone operator in Slovakia, Orange, launched the commercial operation of fixed line voice services at the beginning of September. Orange provides the service through its new fibre optic network, which it has been testing since last year. The network also enables Orange to provide broadband internet and another new Orange product, digital TV.

Slovak Telekom (ST), which is a major operator of fixed phone lines and an important internet provider in Slovakia, began offering digital television last December. ST is also developing a fibre optic network, along with its traditional network of metal telecommunications cables. Thanks to the fibre optic network, ST can draw more potential customers with digital TV and broadband internet.

UPC Broadband Slovakia, which is mainly known in Slovakia as a provider of cable TV and broadband internet, launched commercial operation of fixed line phone services in April 2006.

"The goal is to provide customers with all the telecommunications and video services through one provider, which is also financially convenient for customers because a package of services lets providers offer attractively-priced services," Jaroslav Kolár, spokesman of UPC Broadband Slovakia, told The Slovak Spectator.

New players moving into the video segment is a logical development that can also be seen in the markets of all developed countries, he added.

"We plan to gradually offer triple play services in other towns, too," Kolár said.

The current trend of falling sales on fixed line voice services and the growing availability of broadband internet connection are encouraging all the European operators to search for new services for their customers, said Jana Burdová, spokeswoman of Slovak Telekom.

"These are the reasons why Slovak Telekom decided to enter the untapped market of digital interactive television," she said.

ST is currently interested in developing its fibre optic network, which will help increase the number of potential customers for its digital TV and broadband internet. The company plans to invest about Sk1 billion (€29.8 million) into fibre optics this year and a similar amount in 2008.

"Some of the optical infrastructure will be put into operation in these locations by the end of this year, and the development will be finished in 2008 when Martin and some other towns will also be covered."

However, the company does not want to comment on the amount of investments it has so far put into digital television, which is still a fairly new project.

"We will not disclose the current amount of the investments for strategic reasons," she said.

ST currently has more than 7,000 registered users for digital TV in more than 50 towns and cities. The company's current infras-tructure allows 110,000 customers to access digital TV through its existing network of metallic cables. The new fibre optic network will let it offer digital TV to another 100,000 customers by the end of this year.

"The main goal of Slovak Telekom is to bring broadband internet and triple play service to as many customers as possible," Burdová said. "Customers have reacted positively to the combination of digital TV, internet and voice (phone) services, and our company will continue in this direction."

Orange Slovensko is another company that wants to be a leader in providing a number of integrated telecom services at once.

"We see great potential in this area of business," Richard Fides, spokesman of Orange Slovensko, told The Slovak Spectator.

Orange Slovensko is one of the first companies within the France Telecom group to develop services based on fibre optics.

"Slovakia will be one of the technological leaders in this area because it is one of the cutting-edge solutions," Fides said. "Our mother company, France Telecom, has only launched similar services in some selected areas of Paris so far."

Orange Slovensko announced that it plans to invest about Sk1 billion into fibre optics by the end of this year. The total amount of investments will be in the several-billion-crown range.

The company wants to add more potential triple play service users by the end of this year. First it is concentrating on locations with the highest expected customer interest. After that, Orange will start offering new services using its local partners as soon as they are technically and financially able to introduce them, Fides said.

Orange has only been offering these services for just over a month, and it will not publish a precise number of customers so far. However, the company is pleased by the interest in this product and the interest is developing in line with its expectations, Fides said.