COMMERCIAL digital TV broadcasting could replace the current analog technology in Slovakia by the end of next year.
The Telecommunications Office (TÚ) will try to announce the tender for the operator of the first multiplex terrestrial digital broadcast (DVB-T) in the first quarter of 2008, the SITA newswire wrote. 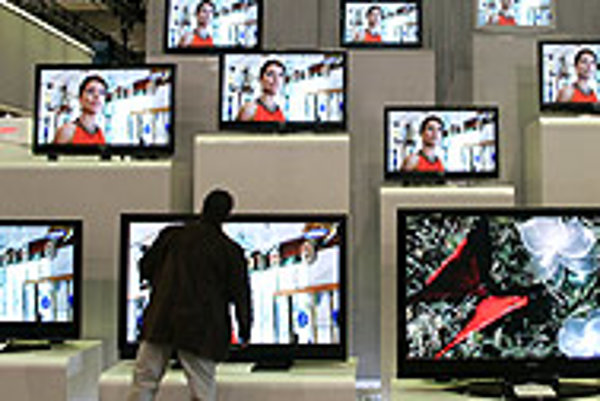 Tender for digital broadcasting on its way

COMMERCIAL digital TV broadcasting could replace the current analog technology in Slovakia by the end of next year.

The Telecommunications Office (TÚ) will try to announce the tender for the operator of the first multiplex terrestrial digital broadcast (DVB-T) in the first quarter of 2008, the SITA newswire wrote.

"It is possible that by the end of 2008, regular digital broadcasting on a commercial basis may be started," said the head of the office, Branislav Máčaj.

A plan for the transition from analog to digital must be approved before the tender can be announced. The TÚ has almost completed the plan, and it will hand it over for the legislation process as soon as it's done.

Máčaj said he thinks several companies will bid for the tender for operating the digital broadcast - likely including the former Slovak Telekom-affiliated Rádiokom-unikácie, which was recently bought by the TRI R consortium.

Rádiokomunikácie has already been distributing TV signals across all of Slovakia.

"After the Antitrust Office of the Slovak Republic has approved the purchase (of Rádiokom-unikácie), we will focus on improving coverage in Slovakia with a high-quality TV signal, enhancing services, and first of all, preparing the transition to digital TV broadcasting, so that the highest possible number of people are satisfied," Eric Vattier, the CEO of I.T.A. Telecom Slovakia, which is a member of the TRI R consortium, said in August.

The current law, however, only accounts for the possibility of a single operator of the multiplex during the transition period. For this reason, Máčaj said he expects that the operator of the first multiplex will probably provide services to the broadcasters for a regulated price.

The deadline for the transition to full operation of the digital broadcast is set for December 31, 2011. After this date, the analog broadcast signal will likely be shut off and the multiplex will have to broadcast across all of Slovakia.

PEOPLE who live in the valleys or the hills won't be able to get a TV signal on ordinary antennas, starting between 2009 and 2011.

The higher-quality digital terrestrial signal that is expected to replace the current analog transmission will not reach about a fifth of Slovakia's inhabited territory.

As everyone in Slovakia is entitled to public broadcasts, the state is preparing subsidies for those who will lose their terrestrial signal to buy a satellite, the Pravda daily wrote.

The satellite dish with a receiver device will cost Sk3,000 (€90) or more for one TV set. The Ministry of Transport, Post and Telecommunications says that up to one million citizens could get subsidised satellites, and the compensations could cost the state almost Sk3 billion.

The subsidies would go through the STV public broadcaster, which would receive money from the state. STV cannot pay for the satellites from its license fees, and it doesn't have enough income on its own to fund the dishes.

"If STV's income from advertising was about Sk300 million a year over the next years, STV would have to pay for the satellite receivers over almost 10 years, which is impossible," the ministry said in its report on possible ways to finance the transition to digital terrestrial broadcasting.

The ministry is considering offering subsidies before analog TV broadcasting is eliminated. For the first 300,000 to 450,000 people who switch to digital TV, the ministry is proposing a motivation grant of Sk1,000 crowns for the digital tuner, which costs Sk2,000. It also plans to cover the whole cost of the cheapest tuner - Sk2,000 - for the 180,000 or so people below the poverty line.

Some citizens with disabilities would get a more advanced digital tuner, worth Sk6,000, for free. The advanced tuners would let them use subtitles or an audio description of the programme.

The motivation and social grants would cost Sk2.1 billion to Sk2.6 billion in total.

Possible sources of financing are money from the state treasury, EU funds and private capital, the ministry said.

The ministry is discussing the satellite subsidies and the financing of the transition to digital TV with all the ministries and private companies involved - such as TV channels and signal broadcasters.

"The definite conclusion will appear in the proposal that we must present to the government session by the end of this year," said ministry spokesman Marián Jánošík.

The state must abide by the principle of technical neutrality when it comes to subsidies. In Germany, the subsidy only applied to aerial digital broadcast receivers, and it was questioned by the European Commission. In Austria, families get the subsidies but they can choose if they want to receive the digital signal by antenna, cable or satellite.

The subsidies could also make it cheaper to get digital TV through cable, which is already offered by Orange, Slovak Telekom, UPC and Satro.

During the transition to digital broadcasting, the analog system will also operate in parallel for some time. The government strategy created in 2006 expected this time to be six months. The cost of broadcasting two signals instead of one for six months would be about Sk175 million.

"There will be efforts to shift these costs to taxpayers," said the chairman of the Parliamentary Committee for Culture and Media, Pavol Minárik (KDH). The TV channels would not be willing to abandon analog broadcasting if switching to digital costs them viewers and advertising revenues, due to the fact that not everyone would be able to access digital TV during the transition, he said.

A recent amendment allows analog transmission to operate until 2011.

RÁDIOKOMUNIKÁCIE, which provides radio and television broadcasting and services to mobile operators, is officially in the hands of its new owner, the TRI R consortium.

The share transfer followed approval by the Antitrust Office, based on the contract signed between Slovak Telekom and

TRI R has already paid for the shares it received and the money has already been transferred to Slovak Telekom's account.

The two contracting parties agreed that they would not reveal the price, commercial terms, or any other terms under which TRI R acquired the TBDS shares.

"We see Slovak Telekom's decision as an acknowledgment of the quality of our bid and a confirmation of the wisdom of its choice in creating a partnership within the consortium," said Jozef Motyčka, the chairman of the Board of Directors of Movys, the leader of the TRI R consortium.

"Our experience in the field of radio communications in the Slovak Republic, along with the know-how of our foreign partner, creates the basic preconditions for the long-term and successful development of the TBDS company."

The TRI R consortium was founded by Movys (60 percent), I.T.A. Telecom Slovakia (30 percent) and Hampden Investments Limited (10 percent), with the intention of jointly bidding Rádiokomunikácie in a tender announced by Slovak Telekom.

T-SYSTEMS, the German company that is part of the Deutsche Telekom telecommunication group, is planning to shift 1,600 jobs from Germany to Central Europe by 2009.

According to the German Handelsblatt daily, the company is considering Slovakia, the Czech Republic and Hungary, the SITA newswire wrote on October 4.

The shift would involve 1,500 jobs in accounting and 100 service jobs, the daily wrote - about 30 percent of the employees of the German division of the T-Systems.

The company is deciding between Prague, Košice, Budapest and Debrecín.

T-Systems has already been operating in Slovakia through the T-Systems Slovakia company. Last year, it built a customer service centre in Košice, which offers non-stop support services for customers across Europe.

THE TELECOMMUNICAT-IONS Office of the Slovak Republic (TÚ) solved 70 disputes between telecommunications companies and their clients out of court in the first six months of 2007.

According to TÚ, it had a 43-percent success rate, which means an agreement between the disputing parties, SITA wrote.

The TÚ is not a substitute for the court. It can only settle disputes out of court when the dispute involves payments for public services or the quality of the services.

In addition, the office can only step in when a customer files a complaint and is not satisfied with the way it was settled.

The TÚ itself does not handle the complaints. If a customer files a complaint to the office, it gives it to the company that is the subject of the complaint.

The birth of the extremely popular mobile phone messaging system is considered to be the opening of the first SMS centre, which receives messages from mobile phones and sends them to recipients. It was constructed by the Acision company, and the first operator to buy it was Telenor, the Sme daily wrote.

In Slovakia, SMS arrived with the arrival of GSM networks in 1997. That was when Orange (then called Globtel) and T-Mobile (then called EuroTel) started operating. So SMS is also celebrating its 10th anniversary in Slovakia.

The first commercially-sent SMS went through the Vodafone network in Great Britain on December 3, 1992, and it read: "Merry Christmas". It was sent from a PC and received on a mobile phone.

The first SMS written on a GSM mobile phone was sent one year later, in 1993. But the idea of sending text messages originated in the 1980s.

Several years ago, it was expected that with the appearance of the third-generation networks, modern technologies would eliminate the SMS. But they are still popular among mobile phone users.

SMS is now an irreplaceable business for mobile operators. In 2006, the worldwide SMS market was worth USD80 billion (Sk1,900 billion or €56.6 billion). By comparison, the entire telecommunications market in Slovakia is worth Sk60 billion.

The average price of an SMS worldwide was 11 US cents last year (Sk2.64), and operators' gross profit margin was almost 90 percent on average.

In Slovakia, one SMS costs from Sk2.40 to Sk3.50. In some lump fees, or within some services, clients can send an SMS for free.