OPERA DIRECTOR Peter Konwitschny returned to the Slovak National Theatre (SND) on October 5 with Puccini's Madama Butterfly, the first premiere of the 2007/2008 season.
His return was eagerly awaited. Two years ago, he thrilled SND audiences with a staging of Tchaikovsky's Eugen Onegin that eliminated the "fourth wall" between the performers and the audience. 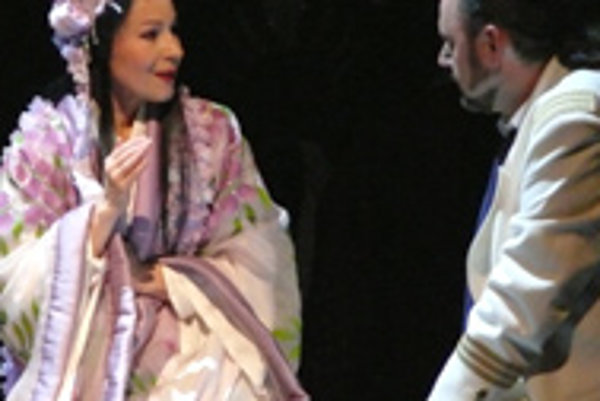 OPERA DIRECTOR Peter Konwitschny returned to the Slovak National Theatre (SND) on October 5 with Puccini's Madama Butterfly, the first premiere of the 2007/2008 season.

His return was eagerly awaited. Two years ago, he thrilled SND audiences with a staging of Tchaikovsky's Eugen Onegin that eliminated the "fourth wall" between the performers and the audience. It was a modern production that Bratislava's conservative opera-goers could accept, because it felt classical.

As a grand opera, Butterfly's text is entirely sung and deals with epic themes set to a large orchestra and chorus. Its tragic story takes place in early 20th-century Japan and tells of Cio-Cio San, a geisha known as Madam Butterfly, who is given in a brokered marriage to Pinkerton, a young American sailor stationed there.

Despite warnings from Sharpless, the American consul, that Butterfly will take her obligations as a wife very seriously, Pinkerton abandons his marriage once he has slept with her, and returns to America.

Three years later, with her new son by her side, Butterfly still believes Pinkerton will return, which he eventually does. But with him is his American wife, Kate, whom he has married in the meantime. Pinkerton still loves Butterfly, but she is now disgraced and nothing can change that. As Pinkerton, alerted to her profound despair, calls her name, she commits hara-kiri (a ritual suicide used by Japanese samurais), just as her father did years ago.

Some of the same devices Konwitschny employed to make Onegin so daring came across as contrived in Butterfly.

Onegin's most dramatic moments were brought to life through innovation, such as extending the stage over the orchestra pit, so that characters could sing to others positioned in the audience. This magnified the experience, almost like watching a 3-D movie.

But in Butterfly, the characters who entered from the orchestra or from above the stage did so simply as a way of introducing their role. The moment held no special emotional or dramatic content, so it seemed like an unnecessary straying from convention.

Also, the scenery in Onegin consisted mostly of a black stage with folding chairs, true to its Romantic style, which emphasises drama over spectacle.

But Butterfly is a grand opera. The set, designed by Jörg Koßdorff, was clusters of transparent sliding panels evocative of Japanese screens. With the large stage of the new SND theatre at his disposal, it seemed a waste to use something so pared down.

More effective in Butterfly were the black-and-white images of early 20th-century Japan that were projected while Pinkerton and Sharpless introduced the story at the beginning of the first act. The juxtaposition of geishas in rickshaws against Americans in dapper suits was a succinct metaphor for the opera's main conflict, and definitely clarified it.

But the greatest success was the opera's dramatic timing and emotional effect. As Butterfly, Eva Jenisová had to communicate a woman who makes the transition from endearing innocence to honourable sacrifice. Frankly, her voice does not have the requisite power for this role, but at times, such as in her main aria, it exhibited a blend of tenderness and defiance that made the transition credible.

Many of Jenisová's most effective interactions were with Monika Fabianová (Suzuki, Butterfly's maid). By the end, the two were like sisters - rolling on the floor together out of happiness when Pinkerton returned to Japan and wrestling for control of the dagger with which Butterfly eventually killed herself. The latter scene was heartbreaking, with Fabianová displaying utter despair and helplessness.

Some of the opera's most potent moments were the most simple. When Jenisová saw Katarína Sroková (Kate), which was her confirmation that Pinkerton has married another woman, the music stopped and she simply looked directly at the audience. It was timed precisely, and the expression on Jenisová's face was a perfect expression of a broken heart. It was a real tear-jerker.

Many of the other singers were also excellent. Ľudovít Ludha (Pinkerton) was in his usual excellent vocal form, with flowing Italianate style and sparkling tone. Dalibor Jenis (Sharpless) had a stentorian sound and a sympathetic aura that made his compassion for Butterfly believable. And Ivan Ožvát (Goro, the marriage broker) was appropriately obsequious.

Despite occasional miscalcu-lations, Konwitschny's direction makes for effective drama, and reminds us that a true theatrical experience is always about feeling.