THE SLOVAK government is attempting to cure the country's long-term unemployment woes by subsidising companies that employ a higher number of socially vulnerable people.
Though the model is widely used abroad, Slovakia's business sector remains cautious, saying it might be difficult to keep the system transparent. 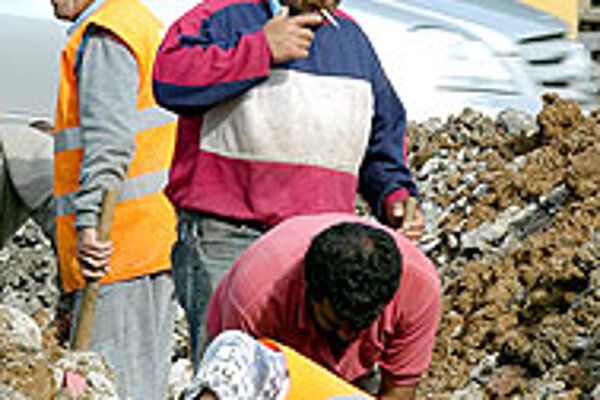 Font size:A-|A+
THE SLOVAK government is attempting to cure the country's long-term unemployment woes by subsidising companies that employ a higher number of socially vulnerable people.

Though the model is widely used abroad, Slovakia's business sector remains cautious, saying it might be difficult to keep the system transparent.

Slovakia's current jobless rate of about 11 percent is its lowest since 1996, but long-term unemployment is still a pervasive problem in many parts of the country. The Labour Ministry hopes its so-called "social companies" can bring some relief to these regions by offering employment to the young jobless, people over 50, single parents or those caring for three or more children.

If a company takes more than 30 percent of its employees from these socially vulnerable groups, and plans to employ them for more than 12 months, it would be eligible for "social company" status - and more money.

The companies must also pledge to use 30 percent of their profit for creating new jobs or improving employees' working conditions, Labour Ministry spokeswoman Oľga Škorecová told The Slovak Spectator.

"The main goal of a social company will not be creating profit, but rather maintaining and creating new jobs," Labour Minister Viera Tomanová told the Hospodárske Noviny economic daily.

The eligible categories for socially-vulnerable employees are under-25-year-olds who have been out of work for at least two years after graduation; people over 50 who have been registered as jobless for at least 12 months; people who have never worked or studied because of their parenting duties; parents or guardians of three or more children; single parents; and people with physical or mental disabilities.

The draft revision to the law on employment services has laid the groundwork for social companies. The ministry says it has formed the law in a way that should make it possible for a wide variety of employers to request social company status.

"Any employer that meets the conditions of the law can, by law, become a social company," Škorecová said.

However, the ministry expects that the eligible employers will mostly be companies established by municipalities, like in other European countries.

The government plans to establish a social agricultural enterprise that would serve as a pilot project for tackling long-term unemployment and improving the economic conditions in Rimavská Sobota. Similar companies are expected to emerge in Revúca and Veľký Krtíš. These are districts where long-term unemployment is the highest.

Businesses from other sectors will also function as social companies, the ministry said.

The business community says the most important step to setting up these companies will be to secure transparency in the whole process.

Tibor Gregor of Klub 500, an organisation for companies with 500 or more employees, said he understands the proposal as an extension of the existing system of protected workrooms for disadvantaged groups, which use their profits for the creation of other jobs.

But he fears the social company system would be highly vulnerable to abuse in Slovakia.

"We are aware of the theories of social business and its spread in Great Britain, the USA and eventually in Italy," Gregor told The Slovak Spectator. "We are convinced that the developmental level of these economies, mainly in relation to business ethics, is at a completely different level than it is in Slovakia.

"In general, I do not see this as a very transparent and easily-controllable way of using state budget money to solve long-term unemployment problems, especially under Slovak conditions."

However, the ministry said the conditions for companies to receive the subsidy are defined by the legislation. But the rules do not strictly set the form of the enterprise, in order to allow the widest possible space for employing disadvantaged applicants.

The ministry's Centre of Labour and Social Affairs will be in charge of overseeing and controlling these companies. The centre will decide on the applications for gaining social company status, and operate a registry of these companies that will be published on the centre's website.

Gregor said it would be much more effective to create a system of further education for the disadvantaged groups, drawing money from the European Social Fund and through the form of a national project.

"If we are to go to in the direction of subsidies, these should be distributed to all the employers who employ disadvantaged groups, without exception," he said. "In practice, I can hardly imagine how these social companies would be controlled, and especially how they are going to use their profits. It is administratively and financially a very demanding system of control."

Another potential pitfall of the social company system is that it gives a competitive advantage to only one business group compared to others - stemming from substantially lower labour expenses.

"This proposal has not met with wide support from the business community," he said.

Social companies create jobs for the long-term unemployed, plug them into the labour process and further their education. But the risks are management failures, the lack of knowledge of the management, the lack of motivation and the potential abuse of the subsidy, according to the Sme daily.

A recent World Bank report said that labour market flexibility in the new European Union countries has not improved much in recent years. The problem of long-term unemployment is pervasive in virtually all countries in the region, but particularly in Slovakia, Croatia, Romania, Poland and Bulgaria, the report read.

"Slovakia is an extreme case: three out of four unemployed are jobless for more than one year," the bank wrote.

In the first quarter of 2007, the unemployment rate in Slovakia stood at 11.5 percent, which means that 303,000 people did not have a job, according to the Slovak Statistics Office. Out of that number, 72.5 percent of people were unemployed for more than one year.

In the second quarter, the average jobless rate dropped by 2.4 percentage points year-on-year to stand at 11.1 percent. The number of unemployed fell by 65,900 to 291,200, the Slovak Statistics Office reported on September 4.

Labour market watchers suggest the falling overall unemployment numbers might be the first sign of a slowdown in the outflow of Slovaks taking jobs abroad.