PERSONAL insurance is becoming increasingly popular in Slovakia, according to a poll from the GfK Slovakia Agency.
The most-used personal insurance product is capital insurance, which was chosen by 36.4 percent of those asked, the SITA newswire wrote. The second most common type of insurance is accident insurance, or the "additional insurance of persons". 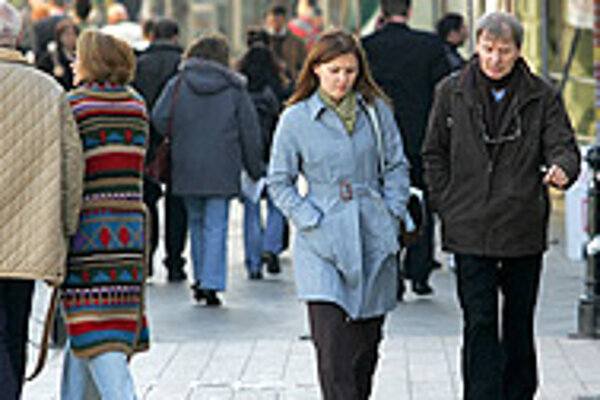 PERSONAL insurance is becoming increasingly popular in Slovakia, according to a poll from the GfK Slovakia Agency.

The most-used personal insurance product is capital insurance, which was chosen by 36.4 percent of those asked, the SITA newswire wrote. The second most common type of insurance is accident insurance, or the "additional insurance of persons".

The poll results also show that the number of Slovaks opting for personal insurance keeps growing. A poll from the same period of last year found that 42.5 percent of residents had no insurance. This year it was slightly fewer people, 39.9 percent.

The GfK Slovakia Agency conducted the poll in March 2007 on a representative sample of 1,000 respondents aged 15-79 across Slovakia.

ALMOST one-third of all Slovak citizens can be called "guarantee enthusiasts" from an investment point of view, putting most of their money into savings accounts and life insurance, according to a recent survey by Austrian company Raiffeisen Capital Management (RCM) in co-operation with GfK Slovakia.

According to the survey, the "careful" category applies to 20 percent of Slovaks.

"They prefer forms of investment like life insurance and additional pension insurance," the poll said.

At the opposite end of the spectrum, 18 percent of the respondents were put in the "aggressive" category, which includes mainly men who like taking risks and investing in shares, bonds and mutual funds, SITA wrote.

Another 18 percent of Slovaks fit into the "sensible" category. These respondents said they preferred investing in mutual funds and life insurance.

The survey also suggests that Slovaks view themselves as poorly informed when it comes to investment opportunities. Thirteen percent of those questioned said they have had little experience with investing.

Almost 90 percent view transparency as a key element when investing. Almost all Slovak investors save their money in the Slovak koruna, with only about three percent picking a different currency.

In most cases, the reason given for saving was the wish to have money available for a rainy day, or to gain funds to support families and children.

Euro introduction will cost insurers up to Sk700 billion

However, an exact figure isn't clear yet because it's hard for insurance companies to differentiate between the costs of introducing the euro and their current operational costs, said Jozefína Žáková, the general manager of the Slovak Association of Insurance Companies.

"However, it is clear that the main sources of costs will be adjusting information systems, administration costs, and costs related to communication with clients," she told a press conference, the SITA newswire wrote.

Žáková said the euro-related costs will not affect the cost of premiums or insurance rates.

"Surely, the clients must not feel it," she said. "This is solely our problem, and there is no way it can be reflected in the cost of premiums."

Insurance companies in Slovakia currently administer more than 13.5 million policies, and they will be influenced by the changes to different extents. According to Žáková, insurance companies are now prepared to meet all the euro-related legal requirements, as well as the rules for the dual currency displays for financial institutions.

"In spite of the fact that insurance is a specific legal field, different from other financial fields, insurance companies are closely cooperating with the National Bank of Slovakia (the central bank) and other relevant bodies in order to make the final documents simple, clear and understandable for clients," she said.

TRAFFIC offenders who cause accidents will have to pay more for their car insurance starting in 2009.

Imrich Fekete, head of the Slovak Office of Insurers, said a central registry for accidents will be launched by the end of this year. It will contain information on all accidents in Slovakia where the claims were paid from mandatory car insurance policies, the Pravda daily wrote.

The registry will let insurance companies charge more for drivers who cause accidents. They may be forced to pay several times more for a policy than drivers who have not caused any accidents since 2002.

Before the system is launched, all insurance companies on the market must agree on the surcharges.

Currently, only some of them issue higher prices for traffic offenders, such as ČSOB Poisťovňa. The Komunálna Poisťovňa company only charges more for drivers who have caused two or more accidents in the last year, "pardoning" the first accident. The same goes for Kooperativa, which is Number 2 on the market.

Most other insurance companies still offer rebate prices for drivers. Some drivers may get the lowest available price if they change their insurance company by the first half of November, or if they agree to a different deal with their current company.

The new registry will take effect when drivers sign policies for 2009, at the end of next year.

The Slovak Office of Insurers includes all the insurance companies on the market.

SLOVAK Railways (ŽSR) is preparing a tender for insuring its property, and for third-party damage liabilty insurance, with an estimated value of Sk124.5 million (€3.7 million), without value-added tax.

According to an announcement in the European Bulletin of Tenders, the planned order should be completed within four years after the contract is signed with the chosen bidder. The tender deadline has not been announced yet, the SITA newswire wrote.

The ŽSR had a profit of Sk20.651 billion in the first six months of 2007, which was 2.4 percent more than the projected amount. At the same time last year, the company had a loss of almost Sk337.5 million.

EXIMBANKA, the state-owned bank that specialises in state support for exports, expects to contribute Sk96.3 billion (€2.9 billion) to the Slovak export sector next year - an increase of 4.7 percent.

Banking activities are expected to make up 70 percent of the total amount, and insurance activities 30 percent.

Insurance activities are expected to contribute Sk29 billion to the sector in 2008, with most of that - up to Sk25 billion - coming from insurance for commercial risks.

In order for the projected increase in exports to occur, Eximbanka says it must expand its capacity for insuring receivables towards foreign entities. It also intends to intensify its cooperation with commercial banks and insurance brokers.

The bank also plans to have a net profit of Sk42.4 million next year, an increase of 12.2 percent. The biggest share of Exmibanka's banking activities next year is expected to be re-financing credits - Sk59.3 billion.

Eximbanka is owned by the state through the Finance Ministry.

SLOVAK Post has announced three new public tenders with a total expected value of Sk870 million (€25.9 million), without VAT, including a tender for supplying its comprehensive insurance, the SITA newswire wrote.

The other two tenders are for supplying its fuel, and providing services connected with the SAP information system.

The tenders were published in the Official Bulletin of the European Union. The insurance order is expected to be worth Sk90 million without VAT for a period of three years. The deadline for applying for tender applications was October 19, and the date for opening the envelopes with bids is scheduled for November 8.

The largest contract is for a supplier to provide 8.5 million litres of fuel over four years, at a total of Sk600 million. The tender will take the form of a limited competition. Bidders have until November 5 to ask for applications, and the bid envelopes are to be opened on November 22.

The tender for preparing and running the SAP information system has an expected value of Sk180 million, without VAT. It will also take place in the form of a limited competition and the contract is expected to last for four years. The deadline for accepting applications for documents is November 9, and the envelopes are to be opened on November 23.

Nurses can insure themselves

STARTING in January 2008, members of the Slovak Chamber of Nurses and Midwives can use special legal security insurance, the Plus Jeden Deň daily wrote.

Nurses and midwifes will also be able to use a 24-hour legal helpline to consult with a top insurance company.

Not only recovery, but also deep and structural changes are necessary after pandemic

See some of the remarks by participants on the first day of the GLOBSEC Bratislava Forum 2021.