The aroma of history, with a focus on the taste

BRATISLAVA NATIVE Denisa Priadková gets misty-eyed when she recalls the city's pre-war café culture, which put it on par with its neighbours Vienna and Budapest.
Communism forced that tradition to end, she says, and as a result, far too many of the cafés in Bratislava today value style over substance. 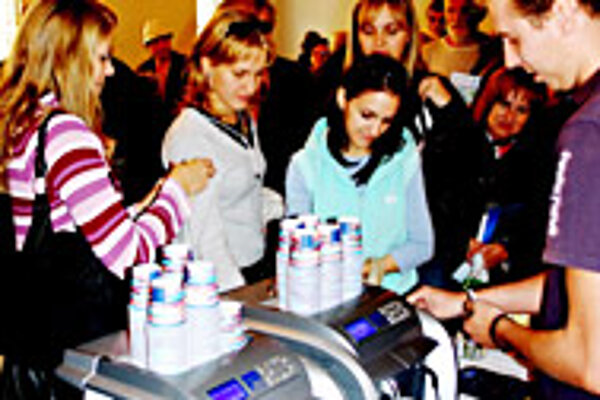 Font size:A-|A+
BRATISLAVA NATIVE Denisa Priadková gets misty-eyed when she recalls the city's pre-war café culture, which put it on par with its neighbours Vienna and Budapest.

Communism forced that tradition to end, she says, and as a result, far too many of the cafés in Bratislava today value style over substance.

So four years ago, Priadková and her husband, Peter, who run the PR 2002 firm, turned their frustration into a campaign to restore the city's glorious past and re-acquaint the Slovak public with good coffee.

"Cafés in Bratislava used to be the hubs of social life," Priadková told The Slovak Spectator. "All kinds of people gathered there, including artists and intellectuals, who spent the day debating philosophy and politics. Of course, once the communists came into power, it wasn't something they encouraged.

"In fact," Priadková continued, "one woman who lives in my building had her house and belongings seized for being involved in that social circle. You never knew who was listening."

Of the three capitals in the neighbourhood, Bratislava was the only one that saw its café culture deteriorate over the 40 years of communism.

"Vienna never had socialism, so its coffee traditions and culture have remained intact," Priadková said. "But the same is true for Budapest, because the people there never fully accepted communism. That's why there was the 1956 Hungarian Revolution, and why communism, alongside fascism, is banned in Hungary today. So even in Budapest, the coffee brewers and cafés kept the tradition alive, and it has made a difference."

Priadková's campaign in Bratislava was inspired by the problems she feels plague the city's cafés nowadays - a lack of ambience and an ignorance of the art and science of making good coffee.

"A good café doesn't have bright lights and mirrors and smoke everywhere," Priadková said. "It has a staff that relates to you, coffee you pay for after it's served, your favourite magazine or newspaper to read, and a selection of blends that inspires experimentation."

And, in an aside that will provide a glimmer of hope to all those coffee lovers in Bratislava who want to enjoy their favourite drink late into the evening, Priadková says another sign of a good café is whether it serves decaf.

"The reason you often can't find decaf in Bratislava is because people don't ask for it," she says.

To help the public make informed decisions about coffee, Priadková and her husband used their PR 2002 firm to publish The Ten Commandments of Good Coffee, an informational booklet that features advice on everything from how much milk to put in a mélange to what kind of sweets to eat with it. The booklet's available at participating cafés and at the mayor's office.

They also came up with Coffee Day, an annual event that took place on October 17 this year at three locations across the city. The day's activities included offering free samples of different blends of coffee, as well as lessons on which milk, cream, and sugar to use.

"People were excited about what they were drinking, but their first question was about how much it costs," Priadková recalled about this year's Coffee Day. "Our message is, 'Don't think about the price. Think about how it tastes.'"

The PR 2002 firm has also put together the City Café contest in which it awards one café in Bratislava the title of Best Café of the Year. Any café that's been open in the city for at least a year at the time of the contest is eligible. First, a select group of voters narrows it down to 16 nominees, and then the public chooses the winner. The winning café receives an award from the mayor, and voters can win up to Sk150,000 in prizes.

This year's list of nominees includes some well-known names, such as Café Vienna on SNP Square and Coffee&Co on Laurinská Street, as well as some neighbourhood favourites, such as Next Apache on Panenská Street and U Anjelov on Laurinská. (A full list of the nominees is available in the booklet and at www.skvelakava.sk.)

Voting cards can be found at any of nominated cafés. To vote, just fill the card out and drop it in the café's voting box, or send it to PR 2002 by mail. The deadline is November 14.

"We hope that by doing this," Priadková said, "we'll get people going to these places and asking themselves why they like or don't like the feeling and coffee there."

As far as which brand of coffee she prefers, Priadková said she likes Lavazza because it's been producing coffee for generations, requires a certain standard from all its distributors around the world, and invests in training for its local baristas.

When it comes to how Bratislava's cafés can reclaim their past, Priadková is quick to put an equal share of the burden on customers, rather than just the café owners.

"People have to be willing to say they're not going to settle for bad coffee," Priadková said. "Because if the customers have high standards for the tradition, the cafés will have to meet them, and that will make the difference."