A lens on modernity

IN THE current photography exhibit at The Guggenheim Museum in New York, Foto: Modernity in Central Europe, 1918-1945, photomontages of nude women catapulting through the air, rigidly aligned skeletons and tanks on the move are the most revealing symbols of interwar uncertainty. 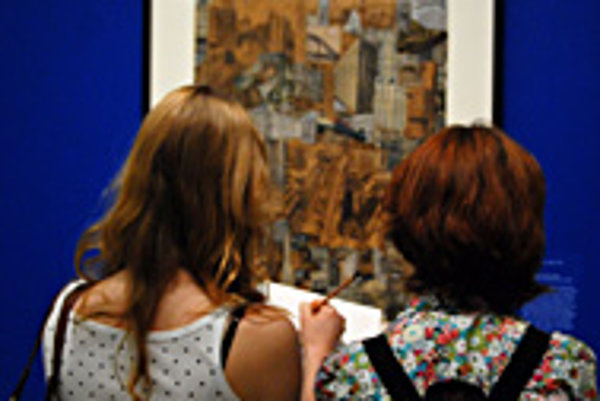 Font size:A-|A+
IN THE current photography exhibit at The Guggenheim Museum in New York, Foto: Modernity in Central Europe, 1918-1945, photomontages of nude women catapulting through the air, rigidly aligned skeletons and tanks on the move are the most revealing symbols of interwar uncertainty.

The montages, many of which capture the mechanised imagination of the early Soviet era, offer a glance into the high-speed revolutionary utopias of early 20th-century communism. Even before the Red Army took over from the fascists in Central Europe, Communism was a spectre hanging over Europe. The images tell of Central European modernity in its many sombre shades of gray and charcoal.

In Central Europe, for the first time, photographers were treating the frame like a canvas to be obscured or left untouched. Artists worked desperately to document a fragmented time. A calm figure in an open field, the sky, or an ominous expanse of darkness invite contrast with the unsmiling, hurried expressions of the peasants, workers, and utopian daydreamers.

In each image in Foto, there are moments captured by film and those captured by the photographer's eye. In the dozens of images spanning the 27-year period of the exhibit's focus, the photo collages depict the mammoth scale of modern industry and a loosening of social and sexual mores, suggesting that what the lens captures and what the photographer sees are two different things.

Photographers in Central European capitals like Berlin, Prague, Budapest and Vienna were closely attuned to the work of their peers in the great metropolises of the West. None of the major trends, from Cubism to Dadaism, escaped the imagination of Central Europe's interwar photographers.

When traveling through the former communist satellite states in Central and Eastern Europe after 1989, Anthony Suau, a Pulitzer-prize winning photographer, said he was startled by the "fairy tale-like quality of life" behind the former Iron Curtain. Even in transition from communism to capitalism, the richness of personal lives compensated for the bleak quality of the surroundings.

Then there are small depictions of human fragility, like a self-portrait by Stanisław Ignaty Witkiewicz entitled Self-Portrait, Zakopane. A solemn-faced Witkiewicz stares open-eyed and pale into the black space of his reflection in a broken window.

Another image, Russian-born American photographer Roman Vishniac's Entrance to the Ghetto, Kazimierz, 1937, shows the vacant, snow-swept streets of the Jewish ghetto in Kraków, Poland. The cinematic photograph, tinged with the sadness of abandoned spaces, is disarming.

While the works on display in this exhibition are undoubtedly photojournalistic in nature, they represent more than the nature of modern life. Rather than documenting moments, photographers in Central Europe were expressing in their art an attitude of uncertainty and displacement.

Most of the photographs catch a split-second movement in high speed motion. There is a certain precision in capturing the stillest moment in a frenetic action and Central Europe's interwar photographers found it.

But there is also a notable absence of the hard, steady images of conflict - a curatorial decision that plays up the fairy tale-like aspect of the region's ambitions, artistic and otherwise, while reducing the growing rumble of the horrors Central Europe would soon face to an ever-present murmur.

In combination, photographs of peasants picking potatoes in the upper right corner of the frame and Martin Munkácsi's quick sports shot of a goalie that has just missed a save capture the limbo of life.

The nudity that might strike a pre-war eye as unorthodox and obscene is dulled by the sheer quantity, much like a state or collective plan. The political map was cracking and so, quite literally, was the canvas these photographers were working on.