Research is about ideas, not location

WATCHING the world ice-hockey championships with his family in Slovakia is one of the things that Aleš Černý, a professor of finance at the Cass Business School in London, misses the most.
His childhood dream was to be a goalkeeper. However, as the hockey dream evaporated, mathematics turned out to be the next best thing.
"I enjoyed solving problems and had a knack for formulating mathematical models that somehow reflected reality," Černý said. 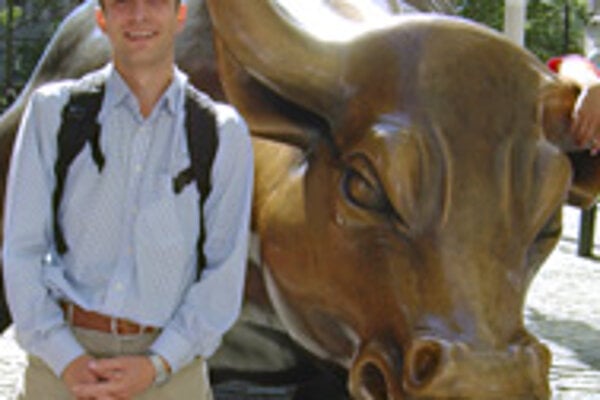 WATCHING the world ice-hockey championships with his family in Slovakia is one of the things that Aleš Černý, a professor of finance at the Cass Business School in London, misses the most.

His childhood dream was to be a goalkeeper. However, as the hockey dream evaporated, mathematics turned out to be the next best thing.

"I enjoyed solving problems and had a knack for formulating mathematical models that somehow reflected reality," Černý said.

After attending Gymnázium Veľká Okružná in Žilina, a secondary school specialising in mathematics, and taking part in physics competitions at home and abroad, he decided to enter the mathematical engineering programme at the Czech Technical University.

"My fascination with physics quickly turned into disappointment, due to the unmanageable amount of material we had to digest in the first two years," Černý remembered.

His attempts to study at foreign universities were equally unsuccessful.

"My faculty offered one international placement for all of the second- and third-year students combined," he said.

Not one to give up, Černý decided to look for another challenging area of applied mathematics. The opportunity presented itself in the form of the then-new US-style doctoral programme in economics at Charles University in Prague (CERGE).

The long-awaited chance to study abroad finally came after Černý won the ACE Phare scholarship, which let him complete his PhD at the University of Warwick. Today he believes that spending a semester or two abroad provides a fresh perspective on one's own country, in addition to giving students the opportunity to meet interesting people on a social level.

Černý chose the UK because of the language and the old tradition of parliamentary democracy.

"I believed that continental Europe must have somehow inherited a lot of its culture from England. I got that one completely wrong, of course," he joked.

But Černý came to love London, and now calls it his second home. The city also helped him pursue his successful career in financial mathematics at Cass Business School at City University .

"We are on the doorstep of the world's largest financial centre," Černý said.

Teaching in specialised one-year Master degrees is a major part of his work. The courses have to achieve a good balance between theory and practice, he said. Some of his students have many years of banking sector experience; others come straight from their undergraduate degrees.

But it is research that has cemented Černý's reputation. So far he has lectured at more than 30 invited research presentations in Europe and overseas, including in the US, Japan and Canada.

The top research is often produced by US universities, reflected in an outflow of talented Europeans, Černý said.

"Fortunately, in mathematical finance, Europe more than holds its own with centres like Berlin, Copenhagen, London, Milan, Paris, Vienna and Zurich," he said.

Černý recognises that he is part of Slovakia's continuing brain-drain problem, and that he'll be watching hockey from abroad for a while longer. But he thinks Slovak universities can overcome their financial disadvantages.

Many Western universities and departments are not short on resources by Slovak standards, but they have problems fostering high-quality research, he said.

The potential solution in Slovakia, he suggests, is to create "lean-and-mean research departments by relocating resources to researchers who publish in journals with high impact factors."

The second option for Slovak universities is to offer specialised Masters programmes at premium fees, he said.

"Good researchers in applied subjects are usually also very good teachers," he said. "And if these successful individuals are able to earn extra money running specialised postgraduate courses, fewer of them will leave for abroad and the quality of undergraduate teaching will also improve."