HEALTH insurance should no longer be a profitable business in Slovakia, or at least not according to Slovak Prime Minister Robert Fico. Private health insurers will be banned from paying out dividends to their shareholders based on the amendment to the health insurance act that the Slovak Parliament passed on October 25 by a narrow margin, after opposition MPs left the house. 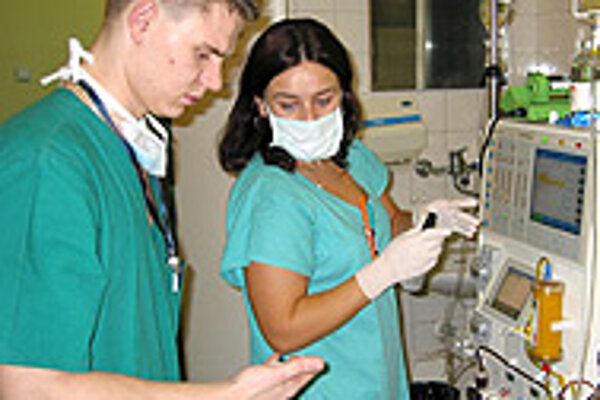 Font size:A-|A+
HEALTH insurance should no longer be a profitable business in Slovakia, or at least not according to Slovak Prime Minister Robert Fico. Private health insurers will be banned from paying out dividends to their shareholders based on the amendment to the health insurance act that the Slovak Parliament passed on October 25 by a narrow margin, after opposition MPs left the house.

Instead, any profits they make will have to be fed back into the health care system.

Private insurers called the law hostile to the investments of their major shareholders and said they plan to take Slovakia to international courts.

"We are not shivering with fear," Fico told Slovak Radio in response.

He added that there have been similar threats in the past, related to halting the privatisation of the airport, but nothing has materialised.

Fico said that the amendment will not harm the insurers - it will only prevent them from profiting from public resources.

"What is happening now clearly reveals what the health care reform organised by Mr. (Rudolf) Zajac, Mr. (Mikuláš) Dzurinda and Mr. (Ivan) Mikloš was all about," Fico told Slovak Radio's Saturday Dialogues political talk show, referring to the previous government leaders. "The point was to allow someone, mainly foreign firms, to access public resources and gradually cut off huge profits from these resources. People are now required to pay money as insurance premiums to the insurers, and it is absolutely unacceptable for us to allow someone to keep part of this money."

"As the volume of finances flowing from the health insurers to health care providers increases, the quality of the health care that is provided will improve as well, along with reducing the waiting time for some planned procedures," ministry spokeswoman Silvia Balázsiková told The Slovak Spectator.

The ministry also expects the legislation will lead to more modern health equipment and more room to increase wages for physicians and nurses, she said.

But Eduard Kováč, executive director of the Association of Health Insurers, said the revision is at odds with the Fico government's official agenda. The agenda clearly claims that no such changes would be made to the health legislation, because they would damage Slovakia's reputation by failing to provide enough protection for foreign and domestic investments, he said.

"This was the first step towards fulfilling the government's decision from May 23, 2007, which encouraged both institutional and legislative steps that gradually lead to the creation of a single health insurer," Kováč told The Slovak Spectator.

All these developments will lead to complaints filed with the Constitutional Court, since the legislation violates international agreements on the protection of investments, he said.

However, all four private insurers - Dôvera, Union, Apollo and Európska Zdravotná Poisťovňa - will continue performing as usual in 2008 so clients don't need to worry yet, Kováč said.

Eurambank, the Austrian majority owner of Apollo, is currently analysing the impacts of the amendment in relation to international agreements on the protection of investments, Apollo spokeswoman Radoslava Miklášová told The Slovak Spectator. Apollo is ready to take all the legal steps necessary to protect its investments, she added.

"The amendment installs regulatory mechanisms that lead to state economic control and centralism, and will harm all the participants of the system - not only the insurers but also providers, health care employees and most importantly the clients," Miklášová said.

Zuzana Horníková of Dôvera also expects that the health insurers will no longer be able to operate in an environment that meets international standards.

"The cabinet and parliament are preventing us from freely handling our resources and investing them meaningfully into the development of the health care sector," Horníková told The Slovak Spectator.

Hicee B.V., the Dutch 99.3-percent shareholder of Dôvera and 49-percent owner of Apollo, sees the amendment as a fundamental contradiction of investors' rights guaranteed by the Slovak Constitution and legal norms on investment protection, Horníková said.

"The approved measure will considerably devalue Hicee's investments to the point that it can be harmful," she said.

Legal representatives of Hicee have already sent the health and finance ministers a notice about the existence of legal dispute between the company and Slovakia, she added.

Union will continue its activities, company spokeswoman Nina Zelníková said. But one of its shareholders, the Dutch insurer and financial group Eureko B.V., will go to court if that's what it takes to protect its investments, she added.

"We assume that this decision of cabinet will have a negative impact on health care, and also potential investments into it," Zelníková told The Slovak Spectator.

đEurópska Zdravotná Poisťovňa, established by the J&T Finance Group, is also considering sending an appeal to the Constitutional Court, said Kováč of the Association of Health Insurers.

However, the Health Ministry said it had expected reactions like these from the health insurers.

"We can hardly expect any other statements from them, because that would have contradicted the opinions they presented in the massive campaigns that they recently ran and poured dozens of millions of crowns into," Balázsiková told The Slovak Spectator.

Všeobecná Zdravotná Poisťovňa is the largest health insurance company, with three million clients. The company's director general, Anton Kováčik, said the legislation will level the playing field for all the health insurers, because they will all be obliged to use their profits exclusively for health care, the SITA newswire wrote.

"Returning money from a positive economic result back to the public health system is logical," he told the SITA newswire.

The legislation must still be signed by the Slovak president for it to take effect. If President Ivan Gašparovič signs the law and the health insurers challenge its validity at the Constitutional Court, it could block the law from taking effect.

Fico said he's not afraid of legal action, because the government's decision was clearly legitimate.

"No one was caused any harm," he told Slovak Radio. "The ease with which the health insurers said that they are going to sue us for Sk30 billion - they clearly said that they wanted to grab something from the public resources for their own private purposes."

The head of the Health Policy Institute think-tank, Tomáš Szalay, said the new legislation is not likely to solve the problems of the health care sector, because the health insurers are not a cause of the problem. On the contrary, they are stabilising elements on the market, he said.

"The problems within the health care sector can be attributed to the government's lack of vision in this area, to drug policies, and to the fact that hospitals cannot be reformed," Szalay told The Slovak Spectator. "If there are court trials and we lose them, not only politicians but also taxpayers will pay the bill."

The government's proposal to cancel the transformation of state hospitals into joint stock companies has also been significant, because most hospitals are in catastrophic condition today because of the missing funds and investments, Szalay said.

"The owner of these institutions, the state, has had a rather harsh attitude towards the hospitals," he said. "If the state is not willing to invest into the hospitals, it should make it possible for the private sector to do so."

There has also been a fiery debate about another part of the amendment: cutting the funds that go to the so-called administrative fund that health insurers use to cover their operating costs, from four percent to 3.5 percent of the insurance premiums collected from the clients.

The Health Ministry claims that the money should be enough for the insurers to cover their operational expenses.

The insurers will still be able to survive on the administrative fund, the prime minister said.

"If they want to persuade me that it is not enough for them, I do not believe half of the words they say," Fico told Slovak Radio.

Reducing the limit for operating costs means limiting services for clients, said Miklášová of Apollo. She added that insurers will have to give up some of their flexibility and narrow the room for communicating with their clients.

"The decision to reduce the fund has happened without any relevant feasibility studies on the part of those who submitted the proposal," said Horníková of Dôvera. The decision will mainly affect clients, but also health care providers, she said.

The insurers spent most of the administrative fund for 2007 on covering personnel expenses and investments into information technologies, according to Zelníková of Union, and next year expenses (euro conversion) will be added as well.

Brezničan said that the cap on expenditures will not affect the quality and range of services provided by the public Spoločná Zdravotná Poisťovňa.

However, Szalay said that the state insurers will have the most problems meeting the new limit.

"To operate, a health insurer needs to purchase high quality and effective health care, and good infrastructure - for example, information system, supervising physicians, call centre," he said. "Saving through infrastructure will turn against the clients themselves and the providers. After all, it is a natural interest of each business to push down operating costs, but not under the limit that makes it impossible for them to improve their performance."

According to Szalay, 3.5 percent is relatively small - for example, health insurers in Germany use about 5.5 percent for their operations.

Currently, any insurer that makes a profit is legally required to take a number of steps, Kováč of the Association of Health Insurers told The Slovak Spectator.

"First it needs to keep its solvency and also fill its reserve fund; it needs to have technical reserves, pay operational expenses to the Office of Health Care Supervision and pay the emergency operational centres," Kováč said. "It must also fulfill its contractual obligations - after all, it must have clients, and they would part from the insurer if it had unreasonable policies."

Once an insurer meets all these obligations and still creates a positive economic result, it is only natural that it would want to manage these funds, Kováč said.