SCIENTISTS say a key to improving research and science in Slovakia is educating young scientists, particularly doctoral students. But researchers working on their PhD degrees complain about a lack of funding, and many are leaving to do their research abroad. 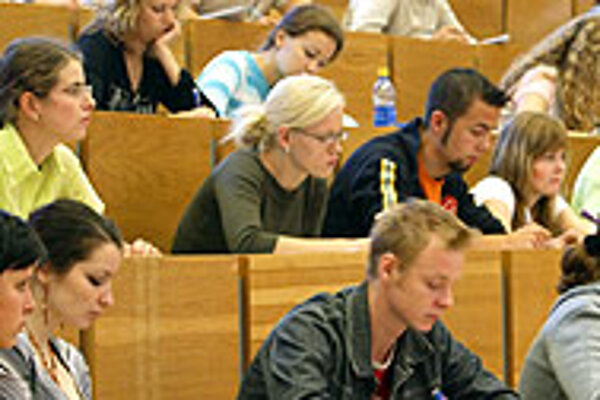 Font size:A-|A+0
SCIENTISTS say a key to improving research and science in Slovakia is educating young scientists, particularly doctoral students. But researchers working on their PhD degrees complain about a lack of funding, and many are leaving to do their research abroad.

Last year there were more than 3,500 full-time and almost 7,000 part-time doctorate students studying at Slovak universities, the Slovak daily Sme reported. According to the Institute of Information and Prognosis about Education, the number of third-degree students is rising, and the growth is expected to continue in the future.

"It's not true that graduates are not interested in doctoral studies in Slovakia," Gabriela Elexová, the chair of the Slovak PhD Students' Association (ADS) told The Slovak Spectator. "The number of doctorate students rose significantly after 2004, when (the amount of) scholarships was raised."

But many students leave to complete their PhD abroad because of a lack of financial resources in Slovakia, she said.

Other reasons they give include the higher level of research and education abroad, better equipped laboratories, the availability of quality literature, and the opportunity to interact with respected people in the field.

Marcela Mrvová, a lecturer from the Faculty of Mathematics, Physics and Information Studies at Comenius University in Bratislava, told Sme that about 20 to 30 percent of the students in her field apply for third-degree study each year, mainly those who are interested in experimental work.

But there are almost no resources for students to work in laboratories, she said. The only way doctorate students can get funding for their activities is through so-called university projects - which are led by the universities without outside support.

The problem is that it's usually the best students with the most potential who leave, Elexová said. She thinks this only deepens Slovakia's growing brain-drain problem.

Branislav Ondrášik just defended his PhD thesis at Comenius University in Bratislava. He did part of his PhD research in the US.

It's understandable that bright young scholars leave for countries with better research environments, he said.

"They love research and when they want to do good research, they cannot do it in Slovak academia and universities," Ondrášik told The Slovak Spectator.

But a lack of finances is not the only thing that holds back research conditions in Slovakia. Universities are not attracting young scholars "(not only) because of the pay, but in some cases at some colleges, because of the fear from older colleagues, who fear the competition from new thinkers that can endanger their long-standing establishment," Ondrášik said.

There are also prestige issues. According to the Slovak university law, the status of a PhD student is the same as any first- or second-degree student, and that doesn't make it attractive for young researchers, Elexová said. The association often hears complaints from doctorate students who have to do some inferior jobs at their universities, and they are underpaid.

"Because of this fact, as well as the obligation to do some teaching during their studies, they do not have enough time to carry out their own research activities," Elexová said.

She compared this to the usual practice in Ukraine, where PhD students have no obligation to teach and "their universities support them in their research work".

As a result, doctorate students in Slovakia are more than first- or second-degree students, but their senior colleagues at the universities still don't treat them as equal partners, Elexová said.

"The future of Slovak science and research is in the hands of the Slovak government, but to some extent it could be influenced by the researchers as well," Elexová told The Slovak Spectator. "The willingness of older and more experienced fellow researchers to participate on their research projects and help the PhD students to carry them out plays an important part here."

A lack of motivation and research quality is caused by the lack of finances, she said. But it is possible to get some money from European research programmes, so the ADS plans to provide PhD researchers with information about these options.

"The mobility of PhD researchers could also be a source of positives, provided that after achieving their degree, the students come back to Slovakia and use their new knowledge, experiences and contacts for the benefits of Slovak science and research," she said.