WINTER tourism is becoming increasingly important for the High Tatras.
In recent years, revenues from the summer season made up 50 percent of the mountain region's tourism revenues, the winter season made up about 30 percent, and the rest was off-season tourism, the SITA newswire wrote. 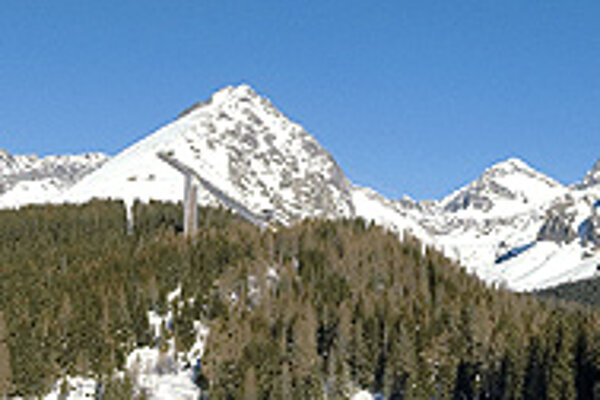 WINTER tourism is becoming increasingly important for the High Tatras.

In recent years, revenues from the summer season made up 50 percent of the mountain region's tourism revenues, the winter season made up about 30 percent, and the rest was off-season tourism, the SITA newswire wrote.

"In recent years, revenues from the winter season have gained four to 35 percent against the summer season," said the executive director of the High Tatras Tourism Association, Peter Chudý.

The jump in winter tourism revenues is the result of the longer winter season, thanks to snow-making technologies.

"This causes the increase in sales and revenues in winter," Chudý added.

The two biggest ski hill operators have invested the most energy into building their snow-making technology. The 1. Tatranská company expanded its snow-making efforts at the Interski and Esíčko ski areas. Tatranské Lanové Dráhy has built snow-making machines at Jakubkova Lúka and at the ski trail that runs from Štart to Tatranská Lomnica.

The hill operators intend to start snow-making as soon as the weather conditions allow it.

"It is much better and it makes more sense to start the season earlier, instead of extending it in the spring," said the technological manager of the 1. Tatranská company, Ján Gavalier.

One of the most important developments of this winter season will be the new funicular from Starý Smokovec to Hrebienok.

Last winter, the ski season in the High Tatras lasted from November 11, 2006 to May 8, 2007 - a total of 161 days. The exception was a period of three weeks between the end of November and the beginning of December, when a sudden warm spell made it impossible to make snow or ski, even in the highest-altitude ski resorts.

Seventy-five resorts were evaluated last year as part of the 2006 to 2009 rating period. Stars are handed out based on specific criteria that measure each resort's equipment and the quality of services.

Judging is done by the Sitour company and Lavex, the professional association for ski-lift and gondola operators, the Trend magazine wrote.

The star ratings stay in effect until May 31, 2009. According to Sitour CEO Ladislav Jurdík, any resort can ask for a re-evaluation before then, especially if it makes new investments that could affect its rating.

Resorts that have not been evaluated so far can also apply to be included in the evaluation. Five more resorts have asked to be judged in 2007, raising the number of resorts that will be rated to 81.

To earn two stars, a resort must have not only ski-lifts and trails, but also some snack facilities and toilets, and printed information about the resort. To get three stars, resorts must also have a website, a kiosk with snacks, and ski rental.

Ski resorts with four stars must include a seasonal information centre for visitors, one cableway, its own website with a webcam picture, child care, a panoramic map of the resort, an eat-in restaurant, ski school, ski repair and service, and cross-country ski trails.

To earn the top five-star rating, a resort should add a year-round information centre, have two or more cableways, offer attractions like snow tubing and an ice rink, and organise regular events.

Ratings were based on the resorts' technological equipment, including the mountain lifts, the length of the trails and their difficulty, and additional services and equipment.

For the first time this year, ratings also accounted for a resort's elevation above sea level. They also recorded artificial snow-making based on the number of kilometres of the resort's total tracks that have artificial snow, not the percentage.

A MULTI-PURPOSE sports centre worth about Sk190 million (€5.7 million) will be built near the Aquapark Tatralandia recreation centre outside of Liptovský Mikuláš.

Its construction, planned for the next August, officially began with the laying of a symbolic foundation stone, the SITA newswire wrote.

The Town of Liptovský Mikuláš got a Sk170-million Euro-funds subsidy for the investment. The rest - Sk20 million - came from its own resources.

"We wanted to promote and support the development of cultural, social and sports events in the Liptov region," said Liptovský Mikuláš Mayor Ján Blcháš.

The investment will complement the services offered at the nearby water park and help boost tourism in this region, he added.

The sports centre will have three tennis courts with a special surface, three basketball and volleyball courts, a handball court and other recreational space.

It will have a capacity of 600 seats, plus 800 moveable seats. The project will also include a 200-car parking lot, roads and other infrastructure.

This is the biggest Eurofunds project supported by the Slovak Tourism Agency.

A PORT for 450 sailboats and a winter dockyard with 180 storage spaces. A golf practise course. A mall with a park, hotel, public beaches, wellness centre, and water park open year-round.

This recreation megacentre, Danubia Park, is coming to the grounds of the Gabčíkovo waterworks in Bratislava, the Hospodárske Noviny daily wrote. Construction is expected to start within two years.

The waterworks are not currently in use, and they were supposed to have been flooded. Danubia Invest, the company that rents the grounds from the public Vodohospodárska Výstavba company, expects the construction on its new complex to be finished by 2014.

According to project manager Katarína Bednárová, the investment is in the early preparation stage. The zoning plan is being prepared and the environmental assessment is underway.

"We are considering several models of financing, which could be made from our own resources, credit and other sources," she said. "The decision will be hugely influenced by the results of a study on how to best use the grounds."

The document is expected to be ready by the end of the year. It will also include data about the expected return on the mega-investment.

Danubia Park is being planned as a cross-border project. Most of its users are expected to be residents of Bratislava and southwestern Slovakia, but guests are also expected to come from the nearby regions in Austria and Hungary.

Vodohospodárska Výstavba signed a 99-year contract for renting the grounds two years ago. Danubia Invest pays an annual rent of Sk3.7 million (€111,000) for the 220-hectare property. A competitor of Danubia Invest, the HB Reavis Group, offered Sk1.5 million a year.

IN THE first half of this year, about 3,500 Russian tourists came to Slovakia. Not bad, except that 80,000 went to the Czech Republic

"The main problem is the lack of information and promotion of Slovakia in Russia, which we intend to improve in the future," Alexander Vladimirovič Turov, the business representative of the Russian Federation in Slovakia, told a press conference at the Infocesta 2007 travel event in Žilina, the SITA newswire wrote.

In the first half of 2007, 13 million Russian tourists travelled to destinations around the world. Russia was visited by 10 million foreign tourists, including 3,500 from Slovakia.

According to Russian tour operators, tourists from Russia are most interested in Slovakia for its ski centres, water parks, mountains, castles, traditions and fresh air. Another advantage is that the Slovak mentality is similar to the Russian one.

However, the poor condition of roads and air connections between Moscow and Bratislava are seen as disadvantages.

The third annual Infocesta brought Russian tour operators to tourism facilities in the Žilina Region. The aim of the event was to promote the potential of the Žilina region, with cultural attractions, historical monuments, folklore, traditional cuisine, and hospitality.

Infocesta was organised by the Žilina Region in cooperation with the Russian Embassy. The partnership will continue when Žilina Region signs a contract with the Ivanovsk region in Russia.

"This contract gives us the basis for developing every field where we see an interest, for example in tourism, education, healthcare and the social sector," said the head of the Žilina Region, Juraj Blanár.

The Šahy Health Centre recreation area will transform into a sports and recreation complex with a water park by 2010.

The Goldrex company plans to gradually construct a water park at the site, complete with playgrounds and infrastructure. The expected investment will total Sk149.3 million (€4.5 million).

The local council agreed to sell the 6.25-hectare property for one crown, the Asb.sk online magazine wrote.

The recreation area currently has a beach swimming area with a childrens' pool and a 700-square-metre lake. But this year the lake was only used for fishing, as the water quality was not good enough for swimming.

The aquapark would also include a rope centre called Tarsaniade, street basketball and volleyball courts, facilities for bowling, pétanque, tennis and beach football, and a wellness centre and gym.

In the first phase, starting next year, the operator won't expand the area beyond its current swimming and fishing uses. Major construction won't start until the second year, after the blueprints and projects are prepared.

The park is expected to open for the summer season in 2010. According to experts, about 100 people are expected to work at the complex in two shifts.