Remembering the Holocaust on All Souls' Day

WHILE the holiday on November 2, All Souls' Day, originated as a Catholic observance, on that day Bernard Knežo Schönbrun remembers the lives of Jews lost during the Holocaust .
He was the only member of his family to survive the Holocaust. 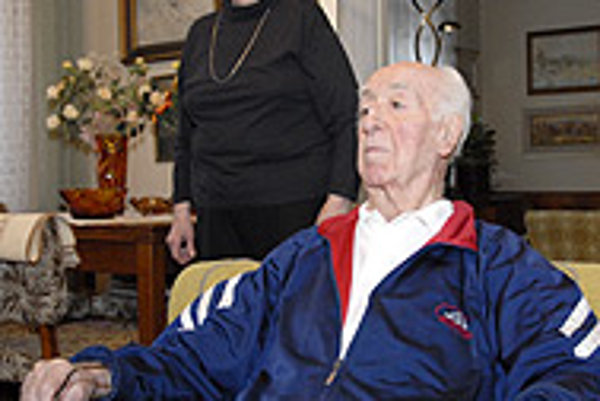 Font size:A-|A+0
WHILE the holiday on November 2, All Souls' Day, originated as a Catholic observance, on that day Bernard Knežo Schönbrun remembers the lives of Jews lost during the Holocaust .

He was the only member of his family to survive the Holocaust.

"I had only three sisters," Knežo Schonbrun said. "They all died. The whole family."

Today Knežo Schönbrun is a kindly 88-year-old with Parkinson's disease. He almost apologises when he starts to tell the horrific story of what happened to his family, which he learned from the testimony of eyewitnesses.

When the Slovak State - the Nazi puppet state that ruled Slovakia during the Second World War - first emerged, Knežo Schönbrun was 20. He was recruited to the so-called Sixth Battalion in Prešov: a reception camp for Jewish boys aged 19 to 25 who were then sent to a labour camp, disguised as an army battalion.

He believes the Sixth Battalion was mainly founded to make the deportations of Jews peaceful.

"They simply put us together so that they could control us," he explained.

While members of the Sixth Battalion were spared from the concentration camps, his other relatives were not so lucky. His three sisters and their husbands did not survive the Holocaust. Neither did his mother. To this day, he still calls her "Mum".

Starting in 1940, Knežo Schönbrun's mother was bedridden with a severe case of rheumatism.

When Knežo Schönbrun was in the Sixth Battalion, his sisters nursed his mother. But in 1942, they were sent to the concentration camp in Lublin one by one with their husbands.

Thus, in the tiny village of Iňačovce in the Michalovce District, close to the Ukrainian border, his mother was nursed by the neighbours. His sister Karolína, who lived in a nearby village, arranged a hide-out for her mother with a neighbouring family, before her own deportation to the concentration camp.

Knežo Schönbrun learned that he had to do something, as the deportations were already in full swing. But he was not able to leave the labour camp; he needed a permit.

One Saturday afternoon after he finished his work, he went to the office of First Lt. Pšenička, who was in charge of the Sixth Battalion in Prešov, to request a permit to leave.

"What for?" he remembers the commander asking.

"My mother wants to see me. I would like to go home and visit her," Knežo Schönbrun responded.

"If she wants to see you, send her your photo," Pšenička answered, before assigning him to an extra 150 minutes of work the next Monday for wasting 15 minutes standing in the office.

"This was the answer of someone who was our commander," Knežo Schönbrun said.

The next Saturday, the same thing happened again. This time, Pšenička wouldn't let him leave because he hadn't shaved properly.

"But how could I have shaved properly, when we lived together with horses in a stable?" Knežo Schönbrun asks.

By the third weekend, he had learned to fake Pšenička's signature and left the camp without a permit.

But he was too late. His mother was already dead.

"She was deported to a concentration camp - a lady who lay in bed for two years was sent to a labour camp," Knežo Schönbrun said. "They threw her into a cattle car."

But she did not even make it to the concentration camp. As she could not move, her fellow prisoners accidentally trampled her to death on the way to Auschwitz in the crammed rail car.

"And I have felt sorry for the rest of my life, because maybe if I had managed to get to her a week earlier, I could have prolonged her life by a week, or by three days," Knežo Schönbrun mused.

Knežo Schönbrun's sister Šárika was 26 when she was sent to the concentration camp. The middle sister, Karolína was five years older, and the oldest, Malvína, was 35. Two of them married brothers named Schön.

Šárika's husband was Mikuláš Schön. He was a healthy, strong man who worked as a vulcaniser before the war.

"I expected him to survive, as he was so strong and fit," Knežo Schönbrun said.

But he did not survive. In the concentration camp, he was chosen for hard labour as part of the Sonderkommando special force.

Prisoners in the Sonderkommando helped the camp guards make the gassing of thousands of prisoners smooth and peaceful. They assisted in stripping them naked and sorting out their possessions. They had to check the mouths of the dead prisoners for gold teeth, and if they had any, rip them out. Then they had to drive the corpses of their fellow prisoners to the building where they were cremated.

Miki Schön carried the bodies of his two sisters-in-law, Knežo Schönbrun's sisters, to the crematorium. One day he brought the body of his wife, Šárika, to the burning chamber.

"In this way, the corpse of his own brother, who was my other brother-in-law, got into the hands of Miki Schön to be re-located, or rather brought from the gas chamber for cremation," Knežo Schönbrun said.

The desperate Sonderkommando tried an unsuccessful rebellion. The Germans hanged them all.

"Two witnesses described this to me, who had no relation to each other - concentration camp prisoners who survived," Knežo Schönbrun added.

To this day, Knežo Schönbrun has kept the farewell note written by Miki Schön.

"I got it through another prisoner," he said. "Many of them, knowing they were going to their death, wanted to bid farewell to their close ones; or at least to write them few words.

At first Knežo Schönbrun's last name was just Schönbrun. He added the Knežo after the war. It was the surname of his friend, a Greek-Orthodox priest who allowed Schönbrun to use it for his fake papers when he got to the Sixth Battalion, so that his surname would not immediately reveal that he was Jewish.

The last name saved his life.

"We are still friends with Jožko Knežo," he said. "He agreed that after the war I could adopt his name.

"And you know what? Now we even have the same illness. He has Parkinson's, and so do I."

Knežo Schönbrun met First Lt. Pšenička from the Sixth Battalion, the man who did not let him visit his mother, again after the war. Pšenička had become a senior communist party functionary.

When Knežo Schönbrun said Pšenička had been a fascist, he was persecuted instead of Pšenička. Communist leaders told him not to malign the party. He was a university graduate but he was assigned to work in a production plant, and even kicked out of his flat with his whole family.

At home today, Knežo Schönbrun points to the silver candelabrum on his end table.

"Look, our neighbour from my native village gave it back to me after 60 years," he said. "Mum gave things away when she understood she would be deported. She asked people to give the things back to any of her children, if they survived.

"And this candelabrum got to me only now," he continued. "I will give it to my daughter."

The head of the Franciscan monastery in Bratislava, Ján Krstiteľ Balázs, says remembering the dead on All Souls Day is about more than going to church or lighting candles in a cemetery.

"The message of these days bears a deeper question about our relationship to those who preceded us," Krstiteľ Balázs explained.

That includes "our relation to the deceased who were put to the mercy of those in power as helpless and defenseless," he said.

"The modern history poses grave questions, unfortunately - about our relation to the Holocaust victims, or to the victims of communist totalitarian regimes. Here, remembering the deceased gains a universal and social dimension, which we must be reminded of constantly."